A Fly in the Frozen Custard 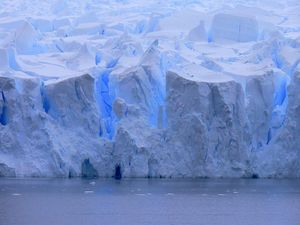 Don't you just love a good controversy? Take, for in­stance, the discussions on long term survival of bacteria. Depending on your point of view, bacteria exist in salt formations going back 250 million years, in 50 million year old amber, or in 500,00 year old permanently frozen ice or permafrost. Some researchers report the isolation of viable bacteria, others are content with their DNA (usu­ally in pieces). Finding something interesting turns out to be relatively easy; proving that it originated when you say it did, less so. The farther back you go, the more contentious the issue becomes. But increased experi­mental sophistication is being brought to bear and the conclusions about long-term survival are becoming more pointed.

A cherished notion has been that the surviving cells are in some form of dormancy. Surely what comes to mind are spores, those masters of resistance, no?

This thought has come under scrutiny. For starters, bacteria surviving in ancient ice formations are not all sporeformers. Furthermore, perhaps dormancy is not sufficient. Maybe survival depends on a small measure of active metabolism, enough to support DNA repair. Think about it. A spore may be resistant to a wealth of physical challenges, but its DNA is still vulnerable to natural ra­dia­tion. Indeed, sporeformers lack active DNA-repair machinery, but this is a generic problem, true for any cell that endures for a long time. So, the notion that DNA repair takes place pari passu with damage is appealing.

A group of scientists from no less that 6 different countries (Australia, Canada, Denmark, Russia, Sweden, USA) came up with the alternative to dormancy. They analyzed samples of continuously frozen permafrost, some going back 500,000 years, and concluded that the bugs therein are ac­tually active, albeit at a very slow rate of metabolism. Isn’t this a neat way of thinking about the problem of long term survival?

To determine whether those bugs had been repairing their DNA all those years, the authors used a clever experimental strategy based on a reaction that proceeds at a relatively slow rate: the spontaneous deamination of cytosine in DNA to uracil. Active cells can repair this damage, replac­ing the uracil with cytosine. How can you tell whether the uracils have accumulated or been re­paired? Treat the DNA with uracil-N-glycosylase, an enzyme that breaks the ribose-uracil bond. This fragments DNA that contains unrepaired uracils but leaves intact the repaired DNA. Long (4 kb) amplicons can only obtained from DNA of metabolically active cells because uracil-containing unrepaired DNA will be cut into smaller fragments. 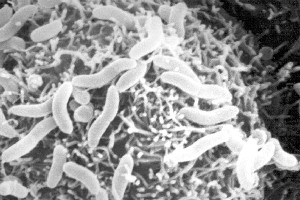 The authors started with samples of DNA recovered from permafrost and Antarctic ice of varying age, ranging from modern up to 1 million years old. Following treatment with uracil-N-glycosylase, they PCR-amplified 4 kb frag­ments that included portions of 16S and 23S ribosomal RNA genes as well as the ITS region. With the base se­quences in hand, they could identify the organisms pre­sent in samples of varying ages. In the oldest samples, the dominant bacteria were members of the high-GC Gram-positive Actinobacteria largely related to the non­sporeforming Arthrobacter. The amount of intact DNA recovered from sporeformers, on the other hand, de­clined with time.

The authors also showed that samples up to about 600,000 years of age evolved CO2 while frozen at −10 °C under anaerobic conditions for some 9 months. This suggests that even when frozen, some slow metabolism continues. Ergo, DNA repair may be possible. 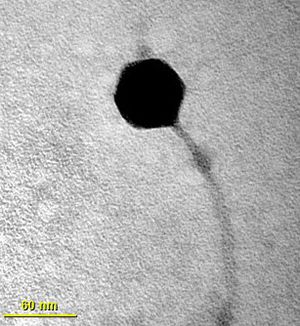 Wow! Look at this! This phage thinks Col­wellia psychrerythraea is metabolically active. Source

There is, however, a fly in the frozen custard. A thought­ful paper by several authors at Northeastern University in Boston brings up the observation that old ice is not all that uniform, but is riddled with channels filled with li­quid water. Active metabolism is likely here. Some psy­chrophilic bacteria such as Colwellia psychrerythraea, are capable of swimming at high speeds at −10°C; others are capable of dividing every 160 days in permafrost samples maintained at −20 °C in the lab. Furthermore, some bac­teria appear to have physiological mechanisms that en­able them to adapt to very cold conditions. Is it not pos­sible then, that the bacteria found in permafrost or gla­cial ice may not be all that ancient? That they are alive and well and going about their business at a respectable pace in your frozen custard?

Thanks, Mark, for the helpful quotes and kind comments. You are right, this is a great topic for discussion. Indeed we could call it a Talmudic one, being that it is not easy to reach definitive conclusions. As for Exobiology, I am busy enough with "Endobiology," if you wish, the contrasting term for "our" Biology.

As always, your comments are important to us and greatly appreciated.