The Microbe That Could Be Seen

The Microbe is so very small / You cannot make him out at all, / But many sanguine people hope / To see him through a microscope.
From The Microbe by Hilaire Belloc, 1900 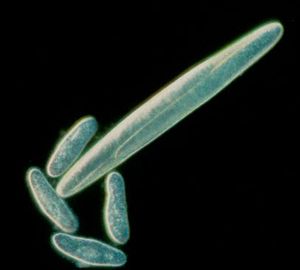 One epulo with four paramecia. Courtesy of Esther Angert

Biology is replete with definitions that have exceptions. A microbe (from the Greek roots mikros and bios for small life) is typically defined as a microscopic living organism invisible to the naked eye. It is clearly in the nature of liv­ing things to stretch our definitions, to bend the rules. There are bacteria – surely microbes – that pooh-pooh the notion that bacteria must be small. They are large enough to be readily seen with the naked eye. But this was not appreciated for a long time; extreme bacterial gigantism is a new subject that is stretching our under­standing of bacterial structure and good manners.

The current champion microbial leviathans are indis­putably the cigar-shaped Epulopiscium fishelsoni that can exceed 600 μm in length, and the spherical Thiomargarita namibiensis more than 700 μm in diameter. In truth, T. namibiensis is something of an impostor, being just a thin layer of cytoplasm surrounding a colossal vacuole. Epulopiscium, on the other hand, is a genuine, cytoplasm-filled giant. 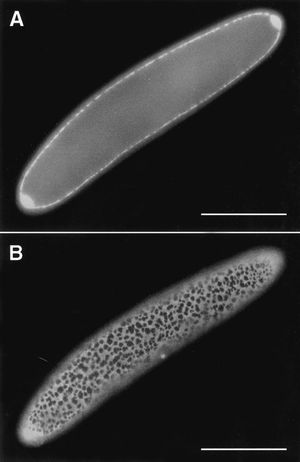 Epifluorescence of a DAPI-stained epulo. Median- and upper-surface optical sec­tions, respectively, of the same cell. A: The layer of nucleoids just under the cell cortex is seen as a bright broken line. DNA associated with putative daughter cell primordia is seen at both poles. B: A surface view of the network of islands of nucleoids. Bar = 50 μm. Source

Someone calculated that if you enlarge an epulo to the size of a blue whale, an E. coli would become the size of a rat. So, you ask, how can nutrients reach the interior? Epulos do not have an uptake mechanism such as used by the whale to swallow Jonah (or, nowadays, planktonic krill). Diffusion alone can't do it fast enough as these or­ganisms grow quite quickly, dividing about once a day. How they manage this is not yet known, but their story is gradually being deciphered.

Who are the epulos, anyhow? They are Firmicutes, close to the spore-forming clostridia. So far, they have resisted cultivation. One has to look for them in the intestines of tropical fish, such as surgeonfish and unicornfish and, when wanted for analysis, one must patiently handpick them one by one – 10,000 epulos for a recently-reported analysis of their DNA.

That report builds on the previous findings (here and here) that the genome of Epulopiscium is present in many copies. Questions arise: Are these copies the same? Are they all used? How many are transmitted to the daughter cells? Where are they located in the cell? To answer the last question first, the multiple nucleoids are found at the periphery of the cell. Good. As the authors say:

"In large bacteria, genomic copies arrayed around the cellular periphery would per­mit transcription of any gene at disparate locations within the cell, thus reducing transit time of proteins and metabolites from site of synthesis or entry to site of action. In this way, a large bacterium could function like a microcolony, with different regions of the cell independently responding to local stimuli, which would alleviate some of the pressure to remain small for the sake of rapid intracellular diffusive transport." 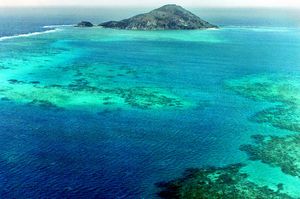 The authors went spear fishing for unicornfish near Li­zard Island in Australia. From the fish guts, they collected 5000 "large" epulo and 5000 "small" ones. (The "large" cells contain mature offspring about to be released from the envelope of the mother cell.) Epulos contain a lot of DNA: each of the larger epulos contain about 40 times as much DNA as a diploid human cell. Only a small propor­tion of this DNA is passed on to the progeny cells, sug­gesting that the DNA is not a single humongous genome, but rather that it consists of many copies of a smaller genome.

To determine the degree of ploidy and the genome size, the researchers measured the content of four genes in individual cells using real time PCR. These genes were ftsZ, dnaA, recA, and the 16S rRNA gene. The first three are usually unlinked and present as a single copy per genome. Their copy numbers are astounding: there were 50,000 to 120,000 copies per cell of each of those three genes. This calculates out to a genome size of 3.8 million base pairs, comparable to that of many other bacteria.

Given the demands for making a prodigious amount of ribosomes, these bacteria have multiple copies of their rRNA operons. There are 240,000 to 740,000 16S rRNA genes per large epulo cell. Strikingly, the cytoplasmic volume per genome copy in the epulos, both large and small, is about the same as for other bacteria.

So, how come epulos are so big? Who knows! One possi­bility suggests itself: to avoid predation by protozoa in the fish's gut. But surely there are other factors, including having to do with the peculiarities of living in this locale. Ploidy is a good way to facilitate evolution by gene dupli­cation. Extreme ploidy is even better. However, the epu­los pass on only about 1% of their DNA to their progeny. Might the reduced transmission of the parental DNA to the offspring result in a bottleneck to genetic diversi­fi­ca­tion? Not likely because the 1% that is transferred con­sists of about 230 genome equivalents, which allows for a lot of redundancy.

Other large cells, notably ciliates such as paramecia, are also highly polyploid. They, however, have a dual nuclear organization – a micronucleus that contains the whole genome and a macronuc­leus containing many copies of actively transcribed genes. In contrast, for the epulos there is no reason to believe that their nucleoids have differentiated.

We bring up the ciliates because they, too, are large among their eukaryotic kin. Both they and the epulos generate a large number of extra copies of their genes within the boundaries of a single cell. They are pushing the envelope.