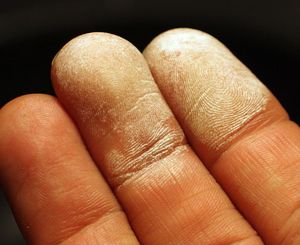 Fingertips shortly after a brief exposure to 35 % hydrogen peroxide. Source

Lysogeny is a widespread form of symbiosis among bac­teria, but having a resident prophage is a mixed blessing. (For a comprehensive review of the plethora of propha­ges found in bacteria, click here.) A prophage can bring benefits such as resistance to attack by other phages or novel virulence factors. But along with the benefits comes a liability – something that we exploit when we use UV or other agents to induce prophages to excise from the host bacterial chromosome, replicate, and lyse the cell. Not surprisingly, bacteria capitalize on this vulne­ra­bility. In at least one case, they use prophage induction to eliminate competing bacteria. That particular case is the killing of Staphylococcus aureus by the pneumococcus, Streptococcus pneumoniae. 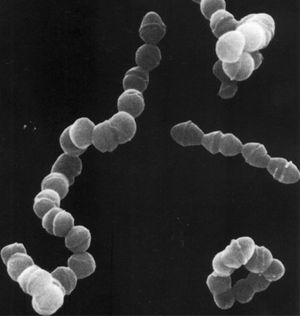 A little background first. In a paper published in 1922, McLeod and Gordon reported that the supernatant from aerobic pneumococcal cultures inhibited the growth of staph. They identified the active agent as hydrogen peroxide (H2O2). Not bad for the Old Days! Since then, their observation has been corroborated and extended by others, adding to the picture of vigorous competition in the heavily colonized human nasopharynx.

How much H2O2 do pneumococci produce? Full-grown cultures of some strains achieve 1 mM concentrations. This is enough to kill some bacteria and also to damage host tissues. So far only S. pneumoniae and some lactic acid bacteria are known to release this much H2O2 into their environment. As a defense against H2O2, most bacteria produce catalase that breaks down H2O2. Others that lack catalase are highly sensitive to H2O2 themselves. Pneumococci have no catalase. How come they survive? Read on. 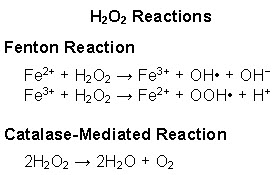 Like many bacteria, the targeted staph is well defended against both H2O2 and its toxic breakdown products generated by the inorganic Fenton reaction. It has H2O2-inactivating enzymes (e.g., catalase). Yet, staph succumbs to relatively low levels of H2O2. Much higher levels are required to kill bacteria by direct damage to their DNA from hydroxyl radicals (OH•). Why is staph particularly vulnerable? Here's a clue. H2O2 induces the alarm re­action known as the SOS response. In addition to its role in mobilizing DNA repair, the SOS response induces resident prophages to enter the lytic cycle, thus leading to cell lysis and death. Another clue: staph typically carries inducible prophages.

Putting this all together, a team of researchers in Spain and the USA came up with an explanation for how pneu­moccci kill staph. They postulated that the low level of H2O2 produced by the pneu­mococci triggers the SOS response in the staph, which in turn induces its prophages to go lytic, ly­sing the bacteria. They treated both lysogenic and non-lysogenic staph strains with 0.5 mM H2O2. The lysogenic strains were killed, the non-lysogenic ones were not affected. The H2O2 treatment elicited an SOS response and induced the prophages in the lysogenic strains. Lysogenic mutants that could not mount an SOS response were not killed, and neither were mutants whose propha­ges could not be induced. As an aside, the researchers reasoned that lysogenic strains of staph should be more sensitive to DNA-damaging antibiotics such as ciprofloxacin that also induce the SOS response. Indeed, they are. 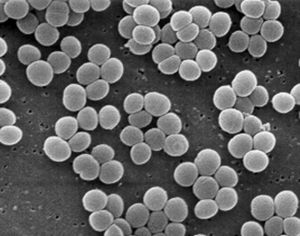 Why, you have been wondering, can pneumoccci tolerate H2O2? Even lysogenic strains are not affected. They don't have catalase and thus would be expected to have more nasty free radicals produced from the H2O2, but appar­ent­ly they have some other, as yet unknown, protective mechanism. And important for our story, H2O2 does not trigger their SOS response.

This sounds like a great bactericidal tactic. Could we use it to treat our own staph infections? Unfortunately, in­duc­ing prophages from staph brings unwanted con­sequen­ces. Among other things, releasing viable phage into the environment could promote the spread of phage-encoded toxins and phage-related pathogenicity islands that encode TSST-1 and other superantigen toxins. Too bad. As you know, staph is becom­ing increasingly resistant to antibiotics (and MRSA is frequently in the news). This would have been a nice addition to our therapeutic options.

Fascinating post, which reminded me of the following study:

how would S. aureus' carotenoid production interact with its peroxide synthesis?