« What Microbiological Discovery in 2008 Did You Find Especially Interesting? | Main | Talmudic Question #44 »

We translate and offer a post from the Spanish blogs Curiosidades de la Microbiología (Curiosities of the Microbiological World) and Esos Pequeños Bichitos (Those Small Bugs).

by Manuel Sánchez and Miguel Vicente 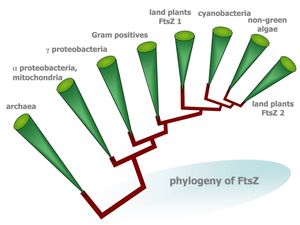 Phylogenetic distribution of FtsZ protein. This protein is essential for many Bacte­ria, Archaea, and organelles.

From wheels to turbines, humans have invented a goodly number of machines to perform various mechanical tasks. The same function, e.g., to move a car, can be car­ried out by motors of different designs. This is also true for cells, where the same function can be carried out by differently designed machines. Just as most cars use a gasoline engine, most microbes and some organelles (e.g., chloroplasts) use the same component, the protein FtsZ, to carry out cell division.

Nevertheless, just as there are cars that use an electric motor and locomotives with a steam engine, some mi­crobes get by without FtsZ and use another system of proteins for their division.

It had already been known that intracellular bacteria, such as the Chlamydia, lack FtsZ. Now, they are joined by an important group of Archaea, the Crenarchaeota, including Sulfolobus acidocal­darius, the species where this was first observed. 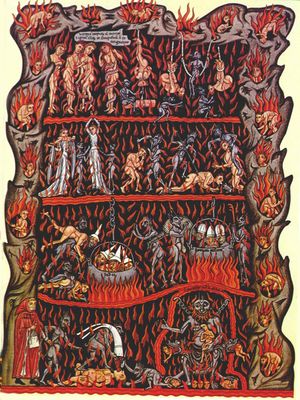 A special home. The garden of delights of Sulfolobus acicaldarius simmering at 80°C and pH 2 would, to us, be a hell. Sul­folobus was first isolated from the vol­canic Solfatara crater that resembles the cauldrons of hell in Hortus deliciarum, a medieval manuscript compiled by Herrad von Landsberg between 1167 and 1185.

What does FtsZ do? This protein resembles tubulin, the eukaryotic cytoskeletal protein that makes microtubules. Microtubules participate in such important processes as vesicle trafficking and chromosomal division during mi­tosis. During cell division in bacteria and organelles, FtsZ localizes at the center of the cell or organelle where it di­rects the assembly of the divisome, the division appara­tus. (Click here for a movie showing a 3D model of as­sembly of the bacterial divisome.) FtsZ is an essential protein, meaning that without it bacteria and chloro­plasts cannot divide.

Division without a Z

How could there not be FtsZ or something similar to it in the Crenarchaeota? A group of researchers at Uppsala University has resolved this quandary. The proteins that make up the division machinery of the FtsZ-less crenarchaeotes are quite different from those found in the Bacteria and the Eury­archae­ota. These proteins do not resemble the tubulins, actins, or myosins involved in eukaryotic cell division. Instead, they resemble eukaryotic proteins involved in the formation of endosomal ve­sicles, starting from the endoplasmic reticulum, and in the release of viruses such as HIV by bud­ding. 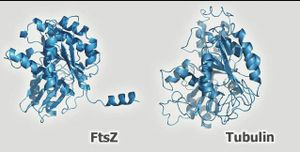 Three-dimensional structure of FtsZ and tubulin. Although they function in different ways, the two proteins are structurally very similar, as seen by their helical and ribbon content rather than by their amino acid sequence. Sources for FtsZ and Tubulin

Rolf Bernander and collaborators identified three pro­teins in Sulfolobus acidocaldarius, called CdvA, CdvB, and CdvC. These are made at the correct time, namely as cell division begins. Their genes are found in an operon cal­led cdv (for cellular division). Proteins CdvB and CdvC are homologous to the eukaryotic proteins of the ESCRT-III complex. (ESCRT stands for Endosomal Sorting Complex Required for Transport.) They form vesicles in the lumen of endosomal vesicles by a process know as "concentric rings." (For a review article, click here.) Let's think about this for a moment. As shown in the drawing below, mak­ing such vesicles is somewhat analogous to cell division by budding. The third gene, cdvA, encodes a protein that resembles other eukaryotic cytoskeletal proteins that are distinct from tubulin. 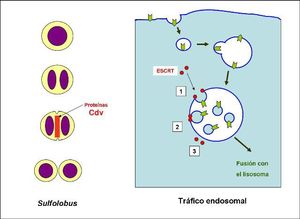 Distant cousins. On the left, we diagram the stages of cell division in Sulfolobus. On the right, we show the formation of endosomal vesicles in a eukaryotic cell.

The panel on the right represents the phases of cell di­vision in S. acidocaldarius. After the chromosome has replicated and segregated, a constriction is made in the center of the cell. The Cdv proteins become localized in the middle of the cell, suggesting that they may play a role in constriction. On the right, we diagram the process of endosomal vesicle formation during the processing of membrane receptors in eukaryotic cells. Such receptors are internalized via an invagination of the cytoplasmic membrane. This results in a vesicle that then fuses with others, making a larger vesicle termed the endosome. In time, the endosome makes new invaginations, liberating smaller vesicles within it. Here is where the ESCRT-III (stages 1, 2, and 3) act. The result is a large vesicle full of little vesicles, which is known as the multivesicular body. In time, this structure fuses with lyso­somes to bring about the destruction of its contents.

The expression of these three Cdv genes in S. acidocaldarius is regulated by a control “checkpoint” so that their synthesis is only induced when chromosome segregation begins. If something goes wrong with DNA replication, for example due to UV irradiation, these proteins are not made and cell division is inhibited. Likewise, these proteins are not made when cell division is blocked due to the halting of growth or due to cell division-inhibiting antibiotics or mutations. 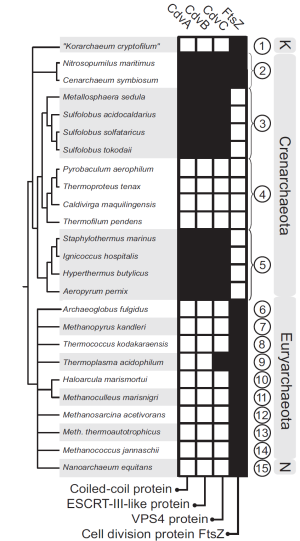 Do you choose FtsZ or Cdv? The phy­logenetic distribution of cell division genes in the Archaea shows that both FtsZ and Cdv proteins are present in only a few cases. The black squares indicate the presence of the genes. N = Nano­ar­chaeota; K = Korarchaeota. The numbers are keyed to the names of the phylo­genetic groups in the source paper

So, how is “division” spelled?

That the crenarchaeotes utilize a conserved eukaryotic me­chanism for a different purpose has a number of phyloge­netic implications. Looking at the phylogeny of the Archaea, it is thought that the first divergence took place between the Archaea/Eukarya lineage and the Bacteria. Later, the Archaea split into the Euryarchaeota and Crenarchaeota. This suggests that the FtsZ division apparatus is older, but that it may have coexisted with one based on CdvB and CdvC. When the two archaeal branches diverged, the Eu­ryarchaeota retained FtsZ, the Crenarchaeota adapted the other system. Eukaryotes evolved a different cell division mechanism, using the Cdv system for making vesicles. The heir of FtsZ, tubulin, was destined for the cytoskeleton to “carry things,” such as moving chromosomes from one side of the cell to another.

It is interesting that within the prokaryotes, the two division mechanisms appear to be mutually exclusive. On the one hand, we have the FtsZ system used by the Bacteria and Euryarchaea, on the other the Cdv system of the Crenarch­aea. Thus, some use an internal combustion engine, others an electric one. But there are also some that work like hy­brid cars, using both FtsZ and Cdv proteins: one group of crenarchaeotes (the Thermoproteales) plus one euryar­chaeote, Thermoplasma acidophilum. More surprising still, there is a third group of archaea (the Cenarchaeales) that uses neither. Do they use a turbine?

Authors' Note: This article appeared simultaneously in the two blogs administered by each of the authors, in the hope of stimulating the public to visit one or the other to obtain a wider view of the curiosities of these small bugs.