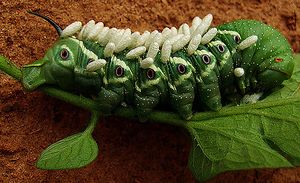 Doomed. The tomato hornworm, the larva of the hawk moth, Manduca quin­quemaculata, is parasitized by the braconid wasp Cotesia congregata that lays dozens of eggs within each larva. When fully mature, each wasp larva tun­nels to the outside of the caterpillar's body and spins a whitish cocoon. Source

Over 30,000 species of parasitoid wasps can't be wrong. Au contraire, their reproductive strategy has been highly successful. They deposit their eggs inside the larvae (or eggs) of other insects, typically lepidopterans (butterflies and moths). Although commonly called parasitic wasps, they qualify as "parasitoids" because parasitization is always deadly for the host. Normally, a caterpillar would recognize a foreign invader, such as a wasp egg, and activate its immune defenses to encapsulate the foreign object. The wasp prevents this by depositing venom and what looks to be viruses in the caterpillar along with her eggs. The venoms are chemically complex and act in a variety of ways to convert the caterpillar into a nursery for wasp larvae. In some species, the venom paralyzes the caterpillar and/or arrests its development prior to pupation. For the moment, we'll call those "viruses" virus-like particles (VLPs), a term used for particles that look like a virus but whose infectivity and components have not yet been charac­terized. The VLPs suppress the host immune response and are required for successful parasitization. 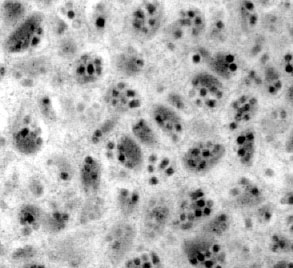 Electron micrograph of VLPs deposited along with their eggs by a braconid wasp, Glyptapanteles indiensis. Each membra­ne envelope encloses 5–10 nucleocap­sids. Source

The two lineages of wasp parasitoids (the braconids and ichneumonids) independently evolved similar reproduc­tive strategies – an elegant example of convergent evo­lution. More is known about the braconids, so we'll focus on their story, especially on the essential role of their VLPs. VLPs are produced only by females and only in a small number of specialized ovarian cells called calyx cells. VLP production begins when the level of molting hormones, called ecdysteroids, have peaked and initiated ovarian development early in pupation. VLPs are then produced throughout the female's adult life. The capsids of the VLPs are assembled in specialized regions of calyx cell nuclei. The VLPs are bounded by an envelope derived from the nuclear membrane and released into the ovi­duct by cell lysis. The capsids themselves are rod-shaped, 35–40 nm in diameter, varying between 30 and 100 nm in length – even in the same wasp. Structurally they resemble virions of the baculoviruses and their sister group, the nudiviruses. Both of those groups infect arthropods, particularly insects.

What are these particular VLPs? Well, viruses they’re not, at least not in the usual sense. Each particle contains no viral nucleic acid, but rather 10 to 30 circles of double-stranded DNA derived from the wasp genome, the number depending on the wasp species. Total packaged DNA ranges from ~150 to over 275 kb. When the VLPs are injected into a host larva along with the wasp eggs, the VLPs are seen to enter host cells very quickly – in as little as 2 hours, with the phagocytic he­mocytes being most heavily infected. They enter the nucleus where their DNA is released and transcribed, but never replicated. The gene products play a vital role in the takeover of the host, including suppression of the immune response. (For a review of this topic, click here.) 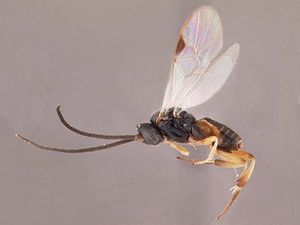 This is a pretty unusual and highly sophisticated arrange­ment for the delivery of genes from a parasite to its host. So what genes are packaged and delivered to the cater­pillar? Some answers are known for one of the braconid wasps, Cotesia congregata. You might be familiar with its host of choice, the cater­pillar of the hummingbird or sphinx moth (Manduca sexta). These huge caterpillars, known as tobacco hornworms, often make their pre­sence known in vegetable gardens where they noticeably defoliate prized tomato and pepper plants. The VLPs de­livered with the eggs by this wasp contain 30 DNA circles. The DNA has been sequenced and 156 genes identified. The sequences of the DNA circles are found as linear genome segments dispersed throughout the wasp genome. In the ovarian calyx cells, those segments are selectively and intensively amplified, then excised and circularized for packaging in the VLPs.

None of the packaged sequences show similarity to any major virus gene. Two-thirds of them con­tain introns, a quarter of them are potential virulence factors. Strikingly, 66 genes are members of 9 gene families. The proteins encoded by 4 of these families contain domains found in toxins uti­lized by pathogenic bacteria or parasitic worms. The largest gene family (27 genes) encodes pro­tein tyrosine phosphatases, key players in signal transduction cascades. The proteins encoded by the second largest family have akyrin repeat motifs that are typically found in eukaryotes where they participate in varied protein-protein interactions.

The abundance of gene families with members of a family distributed on several of the DNA cir­cles suggests a history of gene duplication. Having multiple copies of these delivered genes may have been a key factor allowing the wasp to rapidly adapt to new hosts or to changes in host im­mune defenses. Indeed, although the VLP packaging mechanism is highly conserved among the braconid wasps, the contents vary greatly. Cross-infection experiments with three co-generic species demonstrated that the effectiveness of the VLPs is highly specific for particular host species. Negatively stained VLPs from the ich­neu­monid parasitoid Glypta fumiferanae. The ichneumonid lineage evolved a si­mi­lar strategy independently of the braco­nids, deriving their capsid components from a baculovirus. Several nucleocap­sids (N) are visible within each of two dis­rupted membrane envelopes (E). Source

If there is a capsid, then isn't there a virus lurking some­where? Well, yes – long, long ago. Some of its genes re­main in the wasp genome, to tell the tale. Recently, re­searchers identified 22 actively-transcribed virus-related genes in that same braconid wasp (C. congregata). These genes are most closely related to nudivi­rus genes. Some of them are in the core group that is shared by nudi­vi­ruses and baculoviruses. The researchers investigated a group of those genes further and found that they are integrated in the wasp genome, that they are expressed only in ovarian calyx cells that are producing VLPS, and that some of their protein products are present in the capsids. No viral genes are packaged in the VLPs. These viral-derived genes are highly conserved among the 17,000 species of this lineage of braconid wasps (up to 80% identity). In contrast, their similarity to the nudivirus genes is less than 60% — not too surprising given that this wasp-nudivirus association is estimated to have occurred 100 MYA ago.

Early on the VLPs were dubbed polydnaviruses. Knowing what we know now, would you call them viruses? Or parasitoid-wasp-gene-delivery devices?

Are we sure that wasps didn't themselves invent nudiviruses, which then, eventually, broke loose and achieved a more or less independent existence?

If so, can we say the same about bacteriophages?

You have touched on a longstanding and much debated question: which came first, the virus or the cell? But in this case, you are asking about the origin of one particular family of viruses, not all viruses. The nudiviruses are clearly evolutionarily related to the rest of the viral world, not an independent lineage created in the wasps.