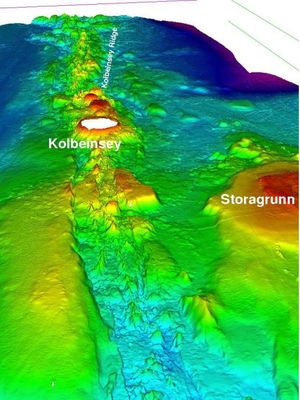 The southern end of the volcanic Kolbeinsey Ridge with its isolated seamounts
perched on the Mid-Atlantic ridge north
of Iceland. Source

We don't know about you, but we've become pretty blase about the stream of papers, each with the customary two dozen or more authors, reporting the completed genome of yet another microbe. But the recent one on the archaeon Ignicoccus hospitalis merits special attention. Combined with the previously sequenced genome of Nanoarchaeum equitans, we have a genomic window into one of the most exciting symbioses in the microbial world. We previously visited with this pair, and return now to continue their story.

This archaeal duo make up the only known obligatory ectosymbiosis among prokaryotes. There are symbioses aplenty between and among Bacteria and Archaea within the profusion of microbial communities on our planet. But in all those other cases, the partners have a somewhat casual physical association. Residing within multilayered biofilms or aggregates, metabolic partners might not even be touching. Here, the two are in intimate contact. One, the tiny N. equitans, requires its I. hospitalis "host" for survival—thus meeting the definition of obligatory.

They were both discovered (reported here and here) by Karl Stetter’s group in hydrothermal vents north of Iceland. Both are hyperthermophiles, thriving at around 90 °C. Ignicoccus hospitalis ("hospitable fire sphere") is a member of the Desulfurococcales, a respectable order within the phylum Crenarchaeota. It has the distinction of being the only known obligatory anaerobic sulfur-reducing chemolithoautotroph in that group. Ignicocci fix CO2 by a novel pathway in which acetyl-coenzyme A serves as the primary CO2 acceptor; they get energy from sulfur reduction using hydrogen as the electron donor. On the other hand, N. equitans ("the riding dwarf") belongs to an intriguing, deeply branching archaeal phylum, the Nanoarchaeota. Whether its numerous unique properties are extremely ancient or highly degenerated remains an open question so far. Nanoarchaea are "nano" indeed, only 400 nm in diameter—about 5% of the volume of your archetypical 1 μm3 prokaryote. It’s been known for some time that N. equitans has a puny genome, barely 490 Kb, below what may be the threshold genome size required for living freely. It lacks genes for a whole slew of the usual metabolic biosynthetic enzymes. Indeed, it has been shown that lipids, and most likely many other metabolites, are transferred from Ignicoccus to the nanoarchaeon rider. Not that Ignicoccus is so well endowed either. Its scant 1.3 Mb genome lacks a lot of the metabolism-related genes found in the other, typically heterotrophic, Crenarchaeota. (No, those missing genes are not provided by the riders.)

It’s easy to see what the nanoarchaeon gets out of this partnership, but what benefits accrue to the host Ignicoccus? Not known. Not only can it grow without its partner, but its growth seems at times hindered by carrying the nanoarchaea. But surely there is more to it. The hydrothermal vents are not only a hot place, which seems to suit these two organisms just fine (living at high temperatures is just another day at the office for them), but they are also highly turbulent. No tranquil environment this. How the two partners find each other to establish the symbiosis is a good question. Nanoarchaea have recently been reported from other habitats, including mesophilic and halophilic ones, so, who knows! 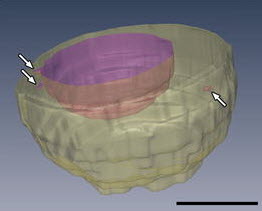 Questions arise as to how the needed metabolites are transferred from host to rider. Both species lack the mechanisms that would allow direct transport from cell to cell. Likewise, various constraints limit what could be secreted by the Ignicoccus. But ignicocci and nanoarchaea have a rarity among the Archaea, a double membrane system separated by a periplasmic space. Not only that, but the ignicocci possess the mother of all periplasms, sometimes occupying half the volume of the cell.

Recent 3D reconstructions of the cell-cell contact region suggest that multiple mechanisms may be at work here. There is reason to believe that the ignicocci bud off vesicles from their cytoplasmic membrane and that these travel to the outer membrane, there to fuse with the membrane of the nanoarchaeon. 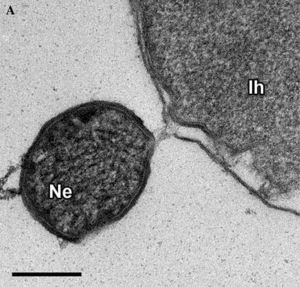 Contact sites of I. hospitalis with cells of N. equitans in ultrathin section. Bar: 200 nm. Source

The paper analyzing the genome of I. hospitalis has thorough discussion of the roles of most of its genes, with interesting notes about gene acquisition and genome reduction. It makes very good reading, especially for aficionados of metabolic annotations. Archaea are full of surprises, as would be expected from organisms with such extreme survival talents. It’s not hard to believe that many more are in store.

We once prompted: Two archaea walk into a bar… and Fred Rosenberg replied: …and the bartender said, "Woese is me!"