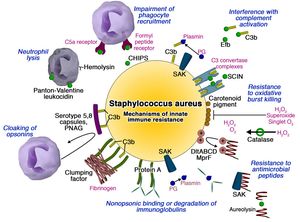 Staphylococcus aureus is an amazingly impressive bug that endlessly fascinates and worries microbiologists. It has an exceptional ability to exploit host immune func­tions, thereby causing a wide range of life-threatening infections. For more than 40 years, new discoveries about its virulence potential have been made at a steadily increasing pace.

Recently, the title of a new paper in the Journal of Bac­teriology caught my attention: "Protein A-mediated multicellular behavior in Staphylococcus aureus." This paper demonstrates the multifaceted roles of but one staphylococcal virulence factor, namely Protein A. This virulence factor was the first surface protein of S. aureus to be identified in 1966. It is regulated mainly by a two-component global regulatory system called agr (for "accessory gene regulatory system"). Protein A is primarily known for its ability to bind immunoglobulins. But where does it bind? Immunoglobulin molecules consist of two ends, Fab, which binds to antigens, and Fc, which sticks to opsonins (the proteins that facilitate phagocytosis). When Protein A on the staph surface binds to the Fc end, it makes it inaccessible to the opsonins, thus impairing phagocytosis of the bacteria. Thus, Protein A thwarts the phagocytic system by keeping the staph from being engulfed and subsequently killed by the immune cells. Like many other bacterial virulence factors, Protein A is a splendid mechanism to combat the immune response. Several studies have demonstrated that protein A is important in staphylococcal virulence. For example, Protein A-defective mutants exhibit reduced virulence in mouse models of arthritis, septicemia, and skin abscesses. 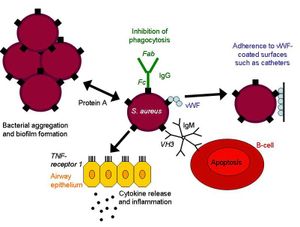 Protein A as a multi-functional virulence fac­tor. Courtesy of Maren von Köckritz-Blick­wede

Later on, Protein A was found to have other properties that modify biological responses. For example, it binds to human von Willebrand factor (vWF), an important glyco­protein that mediates platelet adhesion at the site of en­dothelial damage. In this way, Protein A facilitates the ad­herence of S. aureus to vWF-coated surfaces such as en­dovascular catheters. Protein A can also stimulate inflam­mation in the lung (and therefore tissue damage) by binding to a receptor for tumor necrosis factor 1 (TNFR-1) that is widely distributed on the airway epithelium. This interaction has been shown to play a central role in the pathogenesis of staphylococcal pneumonia.

Additionally, Protein A was recently shown to cripple humoral (antibody-mediated) immunity. It can bind to the region on the surface of B lymphocytes called VH3 that is adjacent to the antigen-binding domain of exposed IgM molecules. Cells bearing the Protein A-VH3 IgM complex are now stimulated to proliferate and undergo apoptosis, which leads to a significant reduction of the repertoire of potential antibody-secreting B cells in the spleen and bone marrow. This matters, because individuals who have suffered from staph infections are usually not protected from reoccurrence since they cannot mount a strong antibody response. 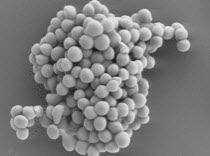 And now, Merino et al. have found a novel function of this protein: it promotes bacterial aggregation and the formation of biofilms. The authors demonstrate that overexpression of Protein A in an agr-negative variant of S. aureus leads to cell aggregation and biofilm formation. Interestingly, addition of soluble Protein A to the growth medium also induces aggregation and biofilm develop­ment, suggesting that this protein need not be covalently linked to the cell wall to promote multicellular behavior. These authors used a mouse subcutaneous foreign de­vice infection model to show that Protein A significantly contributed to the development of biofilm-related in­fections in vivo. The detailed mechanisms involved re­main to be determined. But who knows? Further inves­tigation may reveal yet more unsuspected immunomodulatory roles for this particular virulence factor.

All of these studies provide evidence for the contribution of protein A to the success of S. aureus as a human pathogen. This is an exceptional virulence factor, a single protein that can target multiple immunologically important processes. It is probably not a coincidence that it is among the most highly conserved staph virulence factors, or that its level of expression is significantly increased in staph isolated from invasive human infections. Maybe we should pay even more attention to it. That which makes for success might also make for vulnerability – a potential target for new strategies of disease prevention or treatment.

Maren von Köckritz-Blickwede is a post-doctoral awardee of the Deutsche Gesellschaft der Naturforscher Leopoldina (Halle, Germany), working in Victor Nizet's lab at the UCSD School of Medicine. Her ongoing fascination with S. aureus began with her PhD thesis in Neustadt/Mariensee, Germany, on antibiotic-dependent modulation of staphylococcal virulence properties.