« No Phosphorus? No Problem!(There’s More Than One Way to Skin a Phytoplankton) | Main | The Two Faces of Photorhabdus »

A Personal Note: The Encyclopedia and I 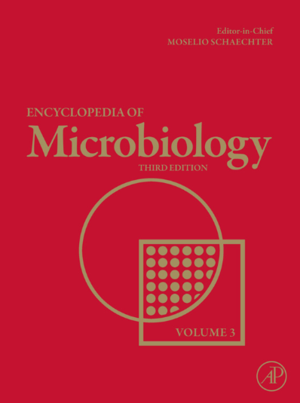 For the last couple of years, during hours not spent blog­ging, I served as the editor-in-chief of the third edition of the Encyclopedia of Microbiology. If this sounds like a large undertaking, it is. The work consists of nearly 300 entries compiled into six volumes that weigh in toto close to 50 lbs! Fortunately for those with weak backs, this edi­tion will also be available electronically. My contribution to this project was reduced to human dimensions be­cause practically all the work was done by an editorial board consisting of some terrific microbiologists. They chose the authors and edited the manuscripts. To see for yourself how distinguished these people are, click here. Did I critically read each entry from start to finish? Not on your life! (However, my curiosity was sufficiently piqued that I scanned – or more – each entry). Most of what I did was to cheer editors and authors along. I wasn't always good at this, but finally this Gargantuan creature emerged from its womb, hale and well.

At the outset, my job was not made any easier by the fact that I took it over from Joshua Leder­berg. Enough said. On the other hand, he thought that an encyclopedia of microbiology was worth putting out. This answered that question. Who am I to argue? Still, let's bring it up one more time: Why amass a mountain of microbiological knowledge in this format? With Wikipedia and other In­ternet material, manuals and textbooks, review articles and research reports, is there not enough to satisfy every manner of thirst for knowledge? I agree, up to a point. There is still something unique to our effort: the depth of coverage is reasonably consistent, it's all together between co­vers – real or virtual, and, above all, the content endured serious quality control. To quote from Lederberg's preface to a previous edition:

The reader wants access but not to be flooded with information and, of course, it’s hard not to be inundated with material, even just that which is essential and important to one’s scientific existence, not to mention everything else that comes to one’s attention. We want quality assurance so we look for assistance, we look for filters, we look for peer review as a method of assisting us in navigating through the blizzard of available information that will only worsen.

I am happy with the outcome. The entries were written by authorities in each field who did not stint in their efforts. Most of them are as good as I've seen. I am not advocating that you go out and purchase it. It's quite a lot of money and can only be afforded by those with unusually deep pockets. It's meant to be obtained by libraries, with a site license for the electronic version. I wouldn't mind if you ask your institutional librarian to get it (although it won't line my own pock­ets, as I have already been paid in a lump sum, rather than in royalties). An easy way to contact your librarian is via this link. Also, my collaborators and I would be very happy if you were to pro­vide us with some feedback. A review for this blog, maybe?

Do I have stories to tell about this exercise? Not many, which attests to how smoothly it went. A few authors came up with ingenious excuses for tardiness, the equivalent of "the dog ate my homework." But that was to be expected from busy people. And it all worked out in the end; the occasional setbacks turned out to matter little. One thing I had to keep in mind was that this was not a textbook. Thus, one of my minor but unforeseen tasks was to expunge words such as Mi­crobial and Bacterial from the beginning of titles – an encyclopedia is organized alphabetically.

Here's a challenge to those audacious (or zealous) enough to read it from beginning to end: I will reward the effort with a bottle of good wine for the first credible claim. I'll set one aside now. (By the time anyone claims it, it will be well aged.)

The French encyclopedists of the 18th century "Age of Enlightenment" sought to catalog all human knowledge. Did we succeed in cataloging all microbiological knowledge? Hardly. But we may have made a dent and, we hope, may have captured some of the excitement in the field today.