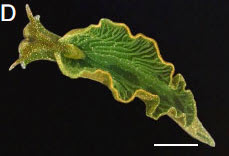 The sea slug, Elysia chlorotica, retains plastids from its otherwise digested algal prey, Vaucheria litorea, and the plastids continue to photosynthesize for months. At least one of the nuclear genes re­quired by the plastid was acquired by the sea slug from the algae by HGT. Source

Is horizontal gene transfer (HGT) a game for prokaryotes only, or can eukaryotes play, too? In their recent review of HGT in eukaryotes, Patrick Keeling and Jeffrey Palmer remind us:

Extant eukaryotes arose by HGT on the grandest scale possible – the endosymbiosis and subse­quent genetic integration of entire organisms that gave rise to the mitochondrion and the plastid.

But, you say, that doesn't count. That may be a special case, two rare occurrences long, long ago. You want to know whether other genes, used by euks, have been ac­quired horizontally, and if so, when and from whom. Maybe even how. In this review, you'll find some intri­guing examples that may send you off in pursuit of the referenced articles.

Here you'll also find a thoughtful analysis of the pitfalls, the reasons why identifying genes de­livered by HGT into a euk is so challenging and fraught with misinterpretation. (For example, the original claim of more than a hundred bacterial genes in the human genome has been politely deemed "overstated.") The gold standard requires the clear demonstration of a strong conflict between the phylogenies of the transferred gene and the organism. This, in turn, requires an adequate library of completely sequenced genomes from the lineage. Even then, distinguishing between HGT and gene loss within a lineage can be problematic. Most known transfers occurred in protists, diverse creatures that remain poorly characterized. So far, few multicelluar genomes have been thoroughly searched for possible candidates. When bacterial sequences do turn up in eukaryote genome projects, often they are quietly discarded as contamination.

Nevertheless, the number of well documented cases involving euks grows. Many involve the trans­fer of genes from bacterial ecto- and endosymbionts. Earlier we reported on massive gene trans­fers from Wolbachia to their insect hosts. Excluding nuclear genes of obvious endosymbiotic ori­gin, what has been found? The number varies widely from species to species, from zero to hund­reds. Most of the protist genomes that have been examined contain a significant number of genes that are strong candidates for HGT from bacteria. Some rumen-dwelling ciliates are estimated to have acquired 4% of their genes in that manner. The bacterial habit of clustering functionally-re­lated genes in operons makes it possible to acquire entire pathways from them in one fell swoop. Anaerobic parasites that rely on fermentation, such as Entamoeba histolytica, appear to have borrowed numerous genes from bacteria ad hoc for adaptation to that environment. We can't resist also mentioning one of our favorite Small Things previously featured in this blog, the tiny green alga Ostreococcus tauri. Its entire chromosome 19 appears to have been acquired from some external source, perhaps a bacterium.

Despite the hurdles, euks also transfer to euks. Despite the difficulties of analysis, including freq­uent confounding gene duplications, there are well substantiated instances involving acquisition of novel functions, especially within the fungi. For example, a wheat pathogen arose from the transfer of a virulence gene to a previously avirulent fungal species a mere 70 years ago. Genes required to feed osmotically on dissolved organic compounds (osmotrophy) have also been transferred from filamentous fungi to the oomycetes, suggesting that HGT played a part in the convergent adaptation of these two groups of plant pathogens.

The matter of HGT – especially across wide phylogenetic space – will continue to hold our atten­tion, probably for a long time to come. It challenges the notion of separate biological realms, con­founds simple phylogenetic schemes, and affirms the plasticity of the genome. We should all stay tuned.