« Talmudic Question #46 | Main | A Personal Note: The Encyclopedia and I »

No Phosphorus? No Problem!
(There’s More Than One Way to Skin a Phytoplankton) 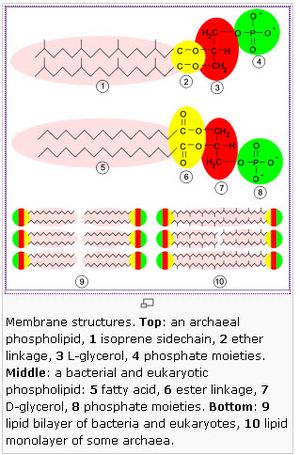 Are you a lipophobe on a low fat diet? Or do you just believe that lipids are boring? Try again. Monotonous they are not. There’s greater variety to be found among the lipids than almost any other cell constituent. It’s truly mind-boggling. Within the prokaryotes alone, archaeal membrane lipids differ from “regular” ones in nearly every respect: they have ether rather than ester bonds between fatty acids and glycerol; hydrocarbon chains bound at the sn-2 and sn-3 positions of the glycerol; highly methyl-branched isoprenoid side chains; and, in some extremophiles, tails of the long chain isoprenoids fused to make a single tetraether lipid layer, thus belying the concept of the universal bilayered lipid membrane. Likewise, mycobacterial membranes contain a veritable zoo of unusual lipids. It goes on and on.

Beyond such diversity across taxonomic groups, the mem­brane lipid composition of a single species reflects environmental and mutational changes. One of the basic tenets of membranology is that the lower the growth temperature, the greater the proportion of unsaturated fatty acids in lipids. Without those double bonds, the otherwise straight chains would crystallize more readily at lower temperatures and thus impair membrane function. An analogous effect is seen with increased atmospheric pres­sure. I had a brush with this topic while on a sabbatical in the lab of Gobind Khorana at MIT. They were studying phospholipid-protein interactions in membranes by synthesizing a bunch of fatty acids that could be photoactivated to crosslink to adjacent proteins. We assayed a number of strange fatty acids using an E. coli defective in unsaturated fatty acids synthesis. To our surprise, this strain could grow normally – especially at low temperatures – in the presence of molecules containing azido groups or phenolic residues that it could incorporate into its lipids. Anything to get a kink in the fatty acid chain!

The plasticity of the lipidome (I thought I found a new “ome,” but I was not the first.) is also seen in E. coli mutants with altered membrane lipids For example, the cells tolerate replacement via ge­netic engineering of the major constitutent, phosphatidylethanolamine, by glucosyl-diacylglycerol. Cells nearly devoid of cardiolipin, another prominent membrane lipid, also appear quite normal. This is a large subject and we won't be doing it justice here. A review by William Dowhan will be very enlightening. 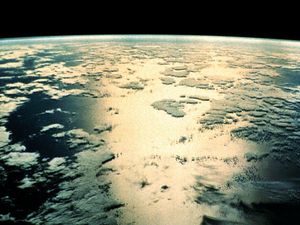 We have a reason for pointing out that some lipids come, others go. A recent paper revisits an earlier finding that marine cyanobacteria and small eukaryotes (the "phyto­plankton") make do in a phosphate-deficient oceanic en­vironment by simply replacing much of their phospholi­pids with sulfolipids. In other words, a sulfur-for-phos­phate swap. This works OK for lipids, but not so well for nucleic acids, which are essentially irreplaceable. (How­ever, in the case of RNA at least, the amount made is modulated by the growth conditions and can be de­creased during hard times.)

The investigators analyzed two contrasting environmental sites: the low phosphorus Sargasso Sea, which has about 8 nmol/L phosphate that turns over approximately every 1.5 hours; various sites in the Pacific Ocean that contain between 6 and 20 times more phosphate that turns over thou­sands of times more slowly. The differences in phosphorus availability were reflected in the total phospholipids of these communities. In the phosphorus-poor sites, phospholipids amounted to 1–2% of the total phosphorus taken up by the phytoplankton; in the phosphorus-rich environ­ments, the value was between 10 and 25%.

So, how do these marine organisms make do without the usual complement of phospholipids? The authors stu­died what happens in cyanobacteria cultured in the lab under phosphorus limitation and found that large amounts of sulfolipids are made as substitutes for phos­pholipids. The sulfolipid that replaces phosphatidylglyce­rol is called sulphoquinovosyldiacylglycerol (they do have strange names, all right). This, as cited in the paper, satis­fies 5–43% of their total cellular phosphorus demand. As the authors point out:"Both of these membrane lipids are anionic in the pH range of seawater and to a certain extent these lipids are biochemically equivalent." Eukaryotic phytoplankton do something similar; they substitute non-phosphorus betaine lipids for phosphatidylcholine. Betaine lipids (e.g., diacylglyceryl trimethylho­moserine) were about 4 times more abundant in the Sargasso Sea organisms than in those from the South Pacific.

Sulfolipids are not something new. Far from. They are found all over, in larger and smaller forms of life. But you may not have encountered sulphoquinovosyldiacylglycerol before. It contains the sugar quinovose (previously called 6-deoxy-d-glucose), which is derived from quinovin, a glucoside found in the bark of the cinchona – he tree noted for making quinine. 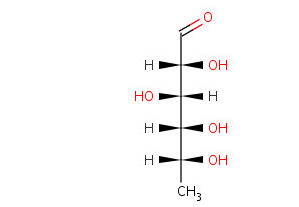 The structure of quinovose. Source

What do we conclude from these lipid shenanigans? At a minimum, microbial cells in the ocean have mechanisms that sense the concentration of available phosphates in the environment and adjust to new conditions by calling in new biochemical troops. These cells do more than just save energy. They adapt to the scarcity of an essential element by sparing its use in synthesizing one cell com­ponent – lipids – that surprisingly can get along with less, thus to make more phosphate available for its essential role in nucleic acids. A phosphate saved is a phosphate earned!