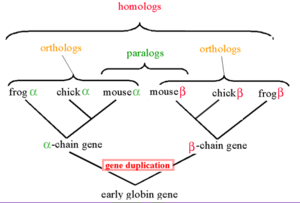 The terms ortholog and paralog have wide acceptance. Yet, we find that they are used in nuanced ways by dif­ferent people. Sure enough, here is some of what the Internet comes up with:

We deleted the ones that seemed like duplications (paralogs?). We find the first one most to our liking. Which do you think is most useful?