« A Personal Note: The Encyclopedia and I | Main | Of Terms in Biology: Eremacausis »

The Two Faces of Photorhabdus 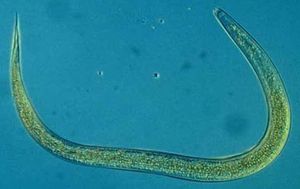 Nematodes – those small, nondescript roundworms – are among the most numerous animals, found in virtually every ecological niche. With an estimated 400,000 to possibly 10,000,000 species, their diversity might match that of the insects, but no one knows for sure. Most ne­matodes live quiet lives, unknown even by taxonomists, but one – Caenorhabditis elegans – has made it big time as a model organism. Two families of entomopathogenic nematodes have garnered much attention due to the company they keep. (More about this below.) Some 350 million years ago, each family, it is thought, independently began a mutualistic association with a lineage of enteric bacteria – one with the lineage leading to the genus Photorhabdus, the other with the Xenorhabdus lineage. These nematode-bacterial teams are deadly parasitoids that prey on diverse insects. Both teams have evolved obligate mutualisms with similar life cycles, but the underlying molecular mechanisms are distinctly different. We'll focus on Photorhabdus lumi­nes­cens, the most "illuminating" example. For a review article covering Xenorhabdus, click here.

(Click to enlarge)
The life cycle of Photorhabdus. Source

Although these are soil-dwelling nematodes, only one larval stage, called the infective juvenile (IJ), is found free in the soil. The name is appropriate, as the IJ is arrested at this larval stage (it is in diapause) and its sole task is to find and enter an insect host. The rest of the life cycle, including reproduction, takes place within a host.

Each IJ carries quiescent Photorhabdus in its gut. Once inside a new host, the nematode IJ migrates to the he­molymph and regurgitates the Photorhabdus. The bac­teria quickly launch into a phase pathogenic to the insect, secreting toxins, enzymes, and anti­bio­tics. Toxins effectively disable the insect's innate immune defenses; enzymes convert host tissues into a nutrient soup; antibiotics preserve the cadaver and, being effective against Xenorhabdus, limit competition from Xenorhabdus-associated nematodes. Experimental injection of less than 5 bacteria into an insect's hemolymph kills within 48-72 hours. In contrast, the insect's innate im­mune response can handle similar infection by >106 E. coli
.

Photorhabdus luminescens strain W14 on an insect midgut under the collagen sheath. Source

The Photorhabdus grow exponentially for the first 48 hours, reaching populations of 109 per host. By then, all of the host tissue has been converted into bacterial biomass – essentially a monoculture of Photorhabdus. Meanwhile, the IJ exits from diapause, begins to feed, and continues development into an adult hermaphro­dite. Photorhabdus then stops growing, and its patho­genic phase gives way to the mutualistic phase. The accumulated bacterial biomass literally nourishes the nematodes, providing most, if not all, of their nutritional requirements. The picky nematodes will feed on parti­cular strains only.

The nematodes reproduce for several generations inside the cadaver. Then, in response to envi­ronmental signals, a final generation of eggs develops into IJs within the body of their mother ne­matode. They receive a vital bacterial inoculum by maternal transmission, not haphazardly from the population free in the cadaver. Thus armed, the IJs emerge from the cadaver and go forth in search of a new host, to repeat the cycle yet once again. Under optimal conditions in the lab, the entire cycle takes 10–20 days and 100,000 IJs can be produced from infection of one insect by a single IJ. Definitely a well-run operation.

Photorhabdus and Xenorhabdus have aroused considerable interest as sources of new antibiotics and broad-spectrum insect toxins for agricultural use. They are also potential model systems. Con­sider the possibilities. First you could compare the mechanisms used for pathogenesis and mutu­alism, and investigate what it takes to quickly switch from one to the other. Then there are the two similar, but distinctly different, strategies evolved by Xenorhabdus and Photorhabdus. What might they tell us about the mechanisms used by the numerous closely-related and well-studied human enteric pathogens? (Click here for a recent review discussing these possibilities.) 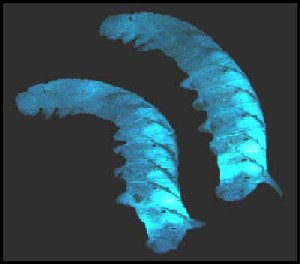 Around the time of insect death, the insect corpse appears bioluminescent due to the P.
luminescens within. Source

Photorhabdus, as the name suggests, carries out biolu­mi­nescence. It also infects wounds. This is the stuff of legends, with stories going back to the American Civil War. It seemed that soldiers with wounds that glowed in the dark were more likely to recover. Their improved prognosis has been attributed to the antibiotics pro­duced by Photorhabdus, but this has not been expe­rimentally confirmed. Photorhabdus is the only ter­res­trial bacteria known to exhibit bioluminescence. They luminesce only during their mutualistic phase, inside the insect cadaver. What use is this? There is evidence sug­gesting that this may be a non-functional trait, recently acquired by horizontal gene transfer from Vibrio, and in the process of being lost. And besides, Xenorhabdus gets along just fine in the dark. Makes you wonder if Photo­rhabdus luminescens really needs to be luminescens.