What You Didn’t Know About Janthinobacterium 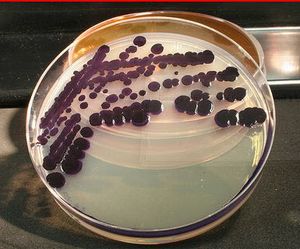 Some bugs are exciting but it takes them a while to be­come well known. The rod-shaped, Gram-negative Jan­thinobacterium lividum falls in this category. But recent discoveries about its physiology, ecology, and medicine highlight its importance. J. lividum is commonly found in soil and bodies of water, but can also turn up in spoiled milk and, on rare occasions, can cause septicemia in hu­mans. Lest you think that its name honors someone called Janthin, janthinus is Latin for violet-colored. (It used to be called Chromobacterium.) It is aerobic and can be cultured. Colonies are purplish-black due to its water-insoluble pigment called violacein. This pigment is preferentially produced when glycerol is the carbon source. There is a correlation between violacein production, biofilm formation, and greater sur­vival, suggesting that it may play a role in response to environmental stress.

While violacein benefits the host directly, it is also known to be toxic against bacteria, viruses, pro­tozoa, and fungi. A recent study showed that J. lividum also produces indole-3-carboxaldehyde, and that this plays a role in a possible mutualistic relationship with the red-backed salamander Plethodon cinereus. These salamanders are often infected with the chytrid fungus Batrachochy­trium dendrobatidis, one of the main pathogens implicated in the near extinction of certain am­phibians. B. dendrobatidis infects the skin of amphibians and causes a disease known as chytri­diomycosis. Amphibian species that carry higher amounts of J. lividum can withstand this devas­tating infection because the anti-fungal compounds produced by the bacteria are lethal to B. dendrobatidis. Exploiting the biological properties of J. lividum may help to provide anti-fungal resistance to the dwindling amphibian population.

In addition to its anti-fungal product, three antibiotics produced by J. lividum act against both Gram-negative and Gram-positive bacteria. (They’re being patented.) Besides making its own antibiotics, J. lividum also has the capacity to resist others. It was recently found to possess a divergent, inducible, chromosomally-encoded metallo-β-lactamase (MBL) called THIN-B, which, when cloned into Escherichia coli, conferred greater resistance to β-lactam antibiotics. MBLs have become increasingly well known because various pathogens have become antibiotic-resistant due to mobile MBLs. While none of these mobile MBLs have been definitively traced back to an environmental, non-patho­genic strain, it is considered likely that such strains are serving as a reservoir. The mobile MBLs are most commonly encoded by gene cassettes in class 1 integrons and are becoming widespread in Acinetobacter and Pseudomonas, two bugs well known for causing hospital-acquired infections. The func­tion of these genes in the environmental strains is currently a mystery. If the only func­tion of MBLs is to provide resistance to β-lactams, why are they so widespread in environments where β-lactams are not common? In what seems to be a puzzling anomaly, J. lividum is unique among β-proteobacteria in making an MBL.

J. lividum has many fascinating attributes that will surely be studied more in years to come. With only 43 PubMed hits, there is still much to learn about J. lividum. If you didn’t know much about it before, well, now you know a bit more.

*Jenna, Rhona, Rosa, and Chitra were students in the University of California at San Diego/San Diego State University Integrative Microbiology graduate course during the 2009 winter quarter.