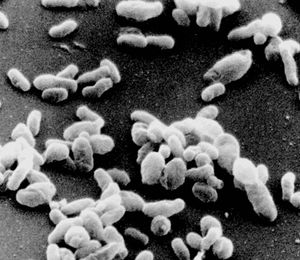 Surprise! Coxiella burnetii, the agent of Q fever, has been grown in cell-free media. This is news because, along with rickettsiae and a few others, C. burnetii is the ste­reotypical obligate intracellular bacterial parasite. Until now, coxiellae could only be grown within a host or in host cells in culture. So how did researchers at the NIH's Rocky Mountain Laboratory come up with a complex – but otherwise fairly ordinary – laboratory medium that supports their growth? It wasn't just trial-and-error, as you might suppose. The researchers arrived at the right conditions by evaluating the metabolic skills of the or­ganism (but usually without overtly relying on its genome annotation). It's interesting that this accomplishment came in stages. Before finding the medium that supports growth of C. burnetii, they had develop­ed one called CCM (Complex Coxiella Medium) that supports metabolic activities of the organism for 24 hours. Their next step was to improve on it.

Several observations suggested that C. burnetii likes a low oxygen environment. Thus, it has genes for cytochrome bd, which has a high affinity for oxygen and is found in other intracellular bacteria, such as the tubercle bacillus, chlamydiae, and rickettsiae. The cellular environment where such organisms grow – a lysosome-like vesicle – is low in oxygen. The upshot? Give them 2.5% oxygen. Those intracellular vacuoles are also acidic, so give them a pH of 4.5.

Earlier, the researchers had noticed that ribosomal gene expression was reduced in C. burnetii in CCM, but appa­rently not for lack of energy. Perhaps lack of amino acids? It turned out that including casamino acids and a high concentration of cysteine in the medium did the trick. Presto, the bacteria now grow at a rate nearly that of intracellular growth (doubling every 9 hours). Perhaps the most telling finding is that these cells are fully in­fectious for Vero cells in culture. Moreover, in the cell-free medium, coxiellae undergo a characteristic deve­lopmental transition from non-replicative small forms to large replicating ones. This interesting phenomenon can now be studied with greater ease, as is true for many other fascinating aspects of coxiellology.

The genome of one strain of C. burnetii has been sequenced. With nearly 2 Mb, its genome is large compared to other "obligate" intracellular parasites, which generally underwent greater genome reduction. As an aside, let us be mindful that the rickettsiae, perhaps not such close cousins of the coxiellae, are the precursors of mitochondria.

Although the C. burnetii genome encodes a lot of metabolic and transport genes, more than in most obligate intracellular bacteria, one cannot immediately deduce from this that it could be free living. Still, it did suggest to the authors of the genome paper that its "obligate intracellular life­style" may be of recent origin and that genome reduction may be in progress. If so, the authors of the growth paper may have been lucky in choosing an intracellular bug that happens to still re­member how to grow by itself. While we're being genomical, the C. burnetii genome has an inter­esting quirk. It has an intron in an rRNA operon that encodes a homing endonuclease similar to one found in the organelles of eukaryotic microbes. This is not found in other prokaryotic geno­mes or in the nuclear genomes of eukaryotes. Another case of lateral gene transfer? Oh, and the genome tells us that C. burnetii has a large number of basic proteins, probably related to its acidic environment.

A beautiful beach in Queensland (White­haven Beach). This is not the site in this Australian province where Q fever was dis­covered, but it’s still cold in the nor­thern hemisphere and we dream of warm beaches. Source

This bacterium is the agent of a somewhat rare disease called Q fever. (The Q is for query, even though Queens­land is where it was first described.). Q fever is a debili­tating disease, something like a bad flu, which affects both humans and domestic animals. It's highly contagi­ous and highly infective – perhaps a single cell can cause disease. It is classified as a class B bioterrorism that "has been weaponized and mass-produced under various biological warfare programs." That may be easier to do now that you can grow it with relative ease. Hmmm…