« Of Terms in Biology: Obligate Parasite | Main | Music to the Tune of a Protein »

Happy Together… Life of the Bacterial Consortium Chlorochromatium aggregatum 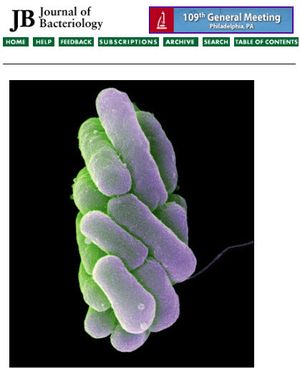 With apologies to the old Turtle’s song (which knocked the Beatle’s "Penny Lane" off the Billboard charts in the spring of 1967), there are many ways that microbes in­teract with one another. Some intermicrobial interactions can be negative, ranging from competition for resources to predation. Others can be essentially indifferent toward one member, as in commensalism. Some of the most in­teresting associations, though, are the ones in which both members benefit: mutualism. Being an enthusiastic fan of the microbiologically offbeat, I have been delighted in recent years to see how modern tools (and some very hard work) have begun to reveal the details of microbe-microbe interactions within each of these categories.

Recently, Small Things Considered posted a fascinating essay describing progress in the study of an association between two obligately interrelated archaea, Nanoar­ch­aeum equitans and Ignicoccus hospitalis. Microbe-microbe commensalism or mutualism is not unheard of (there are also some fascinating examples in this blog), but are only now being in­tensively in­vestigated. Consortia are assemblages of different species of microbes in physical – and sometimes intricate biochemical – contact with one another, and are implicated in biological processes ranging from sewage treatment to marine nitrogen cycling to metabolic processes within the rumen. In my opinion, they reflect the "real world" of microbiology far more than single colony isolates on Petri plates or in broth cultures! 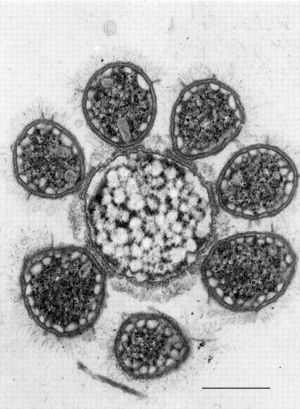 Fig. 2. A transverse section of Chloro­chro­matium. The central cell is the motile an­aerobic heterotroph, the seven attached to it, the green sulfur bacteria. Bar = 0.5 μm. Source

This brings us to the tantalizing story of Chlorochroma­tium aggregatum, a consortium that has been intensively studied by Jörg Overmann and his coworkers for a num­ber of years (here is a very informative link to his labora­tory website at Ludwig-Maximilians-Universität, Munich. inactive as of 2021) I am particularly impressed by this group's disciplinary confluence of ultrastructural EM analysis, molecular biology, biochemistry, bioinformatics, biogeography, and microbial ecology.

This intriguing consortium, often found in the chemocline of stratified freshwater lakes worldwide, is well adapted to take advantage of low light and low sulfide anaerobic conditions. It consists of a motile chemoheterotrophic rod and a number of green sulfur bacterial epibionts. The members of the association have been studied by use of enrichment culture, micromanipulation, and PCR-based 16S rRNA censuses. (By the way, I try to be careful about using the word metagenomics when only 16S rRNA se­quences are obtained and analyzed. Although the "16S rRNA censuses" is a bit ponderous, it is also more accu­rate.) Between 20 and 70 epibionts cover the surface of the central rod, as seen in Figure 1. The central rod with a single polar flagellum is a β-proteobacter within family Comamonadaceae (genus level relatives include Variovorax, Rhodoferax, and Delftia). The green sulfur bacterial epibionts are related to more "typical" green sulfur bacteria, complete with chlorosomes and an autotrophic reverse TCA pathway to assimilate carbon. At least seven different types of motile phototropic consortia of this type have been found to date. They make up two-thirds of the bio­mass found in the chemocline of freshwater lakes. The Overmann group has also shown that at least nineteen different phylotypes of green sulfur bacterial epibionts are found in this kind of association worldwide; the epibionts do not appear to be monophyletic, suggesting that such consortia have evolved independently several times, or that the capacity to form them was pre­sent at the beginning of the green sulfur bacterial clade radiation. 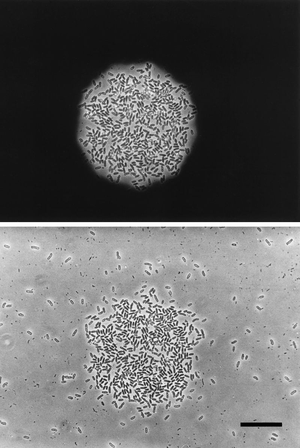 There are three lines of evidence that the epibionts and the motile central rod are in some form of rapid and complex communication. First, the consortium displays scotophobotaxis; as the cells leave light and enter dark­ness, they reverse direction back into the light. Since the epibionts are nonmotile, the central rod (which posses­ses no photosynthetic membranes) responds to light via some sort of biochemical communication with its pho­to­synthetic partner. This property can be observed under a microscope (Figure 3), and has been used to enrich envi­ronmental samples for C. aggregatum. Second, microau­toradiography has demonstrated that alpha-ketoglutar­ate is rapidly taken up by the central rod, but only in the presence of light and sulfide-stimulated epibiont activity. Finally, there appears to be tight synchronization be­tween division rates of the central rod and the epibionts.

The Overmann lab used 16S rRNA "markers" specific to each member of the consortium. Using FISH analysis, they were able to show that neither partner is found by itself in natural populations. However, the researchers were able to cultivate the green sulfur bacterial epibiont in pure culture (proving that it was not obligately associated with the central rod). This organism, named Chlorobium chlorochromatii, was shown to be similar to other green sulfur bacteria: it is obligately anaerobic, possesses chlorosomes, uses sulfide as an electron donor, and so forth.

This group recently published a paper about specific ultrastructural aspects of the consortium. Using high-resolution cryosubstituted SEM, TEM, and careful image reconstruction, they observed structures that may be specific to the association. Figure 4 shows a diagram outlining a "geo­gra­phy" of this consortium, including mysterious structures within and between both epibiont and central rod. 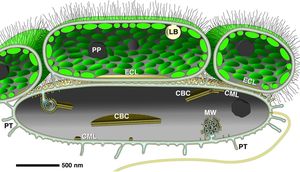 (Click to enlarge)
Fig. 4. Schematic representation from 3D reconstruction of Chlorochromatium ag­gregatum. Epibionts attach by long, hair-like polysaccharide chains. LB = lipid bo­dies with a myelin-like pattern attached to the cytoplasmic membrane. PP = polyphosphate globules. The attachment site of the epibiont is characterized by the absence of chlorosomes and a single contact layer, the ECL. Striking features of the flagellated central bacterium are (i) periplasmic tubules (PT) that can be in direct contact with the epibionts, postu­lated to form a common periplasmic space; (ii) complex invaginations of the cytoplasmic membrane (MW = membran­ous whirls); (iii) subunits arranged in small monolayers or bilayers directly as­so­ciated with the cytoplasmic membrane (CML); and (iv) paracrystalline structures (CBC) on the inner side of the cyto­plasmic membrane (or membranous in­va­ginations). Source

Both members of the consortium have unusual ultra­structural components. The epibionts possess a rough surface with many protrusions; the volume of the pe­riplasm varies from location to location. There are also various intracellular globules that appear to be lipid bodies and polyphosphate inclusions. The central rod has surface variations and papillae-like extensions of the outer membrane (see below). These cells also contain intracellular "zipper-like" regular structures (central bacterial crystals or CBCs), as well as "membranous whirls" consisting of aggregates of cytoplasmic tubule-like structures.

Several ultrastructural properties may be relevant to the association of members of the consortium. First, a re­markable series of fine filaments cover the epibiont sur­faces, appearing something like an "elastic net" that holds the entire consortium together. It is tempting to consider these filaments as composed of polysaccharide-like adhesins, but their nature is still under investigation. Second, the region where the epibionts "touch" the cen­tral rod – the epibiont contact layer (ECL) – has a unique planar appearance. The lack of chlorosomes in the ECL may facilitate metabolite transfer between the two com­ponent organisms. Finally, there may be a common pe­riplasm between the epibionts and the central cell. This exciting observation suggests possible direct cell-cell communication within the consortium.

Recently, Overmann and colleagues applied suppression-subtractive hybridization to what is known of the genomes of 16 free-living green sulfur bacterial to search for genes specific to this mutualistic association. Candidates so far include genes with adhesin-like properties and one with a calcium-binding motif – possibly significant, as subsequent experiments showed that calcium chelators disrupt the consortium.

Clearly, there is a great deal of hard work ahead and interesting results to be revealed. I know I will be watching the journals to see what results appear next regarding this "happy association" between a motile rod and its photosynthetic partner. Just how does this consortium adapt suc­cessfully to living deep within lakes, with no oxygen, little sulfide, and dim light? Dim though their world may be, I suspect that this consortium will shed a great deal of light on topics ranging from symbioses to intercellular communication to ecology to multicellular associations. Happy to­gether… 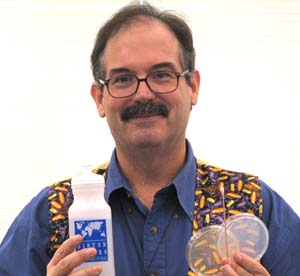 Mark is associate professor in the Department of Biology, University of Puget Soun d, and a passionate advocate for the Small Things.