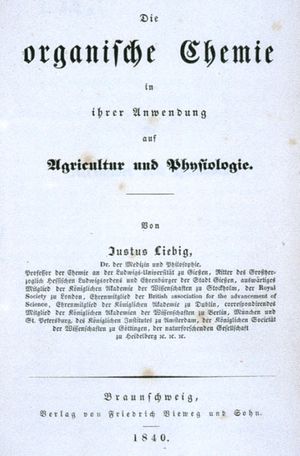 Hardly a household word, eremacausis means, according to the dictionary: A gradual oxidation from exposure to air and moisture, as in the decay of old trees or of dead animals. This is a microbial activity par excellence and in­cludes what happens in compost piles.

Where does this strange term come from? Apparently it was coined by the great German chemist, Justus Liebig, who made an interesting distinction between fermen­tation and decay (or eremacausis). He derived the word from the Greek for slow and combustion.

In organic nature, besides the processes of de­composition named fermentation and pu­tre­faction, another and not less striking class of changes occur, which bodies suffer from the influence of the air. This is the act of gradual combination of the combustible elements of a body with the oxygen of the air; a slow com­bustion or oxidation, to which we shall apply the term of eremacausis.

The conversion of wood into humus, the formation of acetic acid out of alcohol, nitrification, and numerous other processes, are of this nature. Vegetable juices of every kind, parts of animal and vegetable substances, moist sawdust, blood, &c., cannot be exposed to the air, without suffering immediately a progressive change of colour and properties, during which oxygen is absorbed. These changes do not take place when water is excluded, or when the substances are exposed to the temperature of 32°, and it has been observed that different bodies require different degrees of heat, in order to effect the absorption of oxygen, and, consequently, their eremacausis. The property of suffering this change is possessed in the highest degree by substances which contain nitrogen.

We would be hard put to make this distinction considering our current usage of the term "fermen­tation."

Oddly, I learned this word while a high school student in Quito, Ecuador. It must have come into my teacher’s lexicon from some old French textbook, since the school (a very good one) was pat­terned after the French Lycée. You might try slipping eremacausis into the conversation at your next cocktail party.