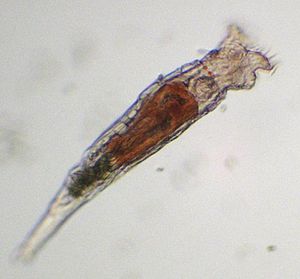 A bdelloid rotifer (possibly Philodina acuticornis). Easily visible here are the corona (the two ciliated disks surrounding the mouth), the stomach (dark red), and the pair of eyes (orange specks above the brain). Source

Sexually reproducing organisms that abandon sexual reproduction are typically doomed to early extinction. This phenomenon, it has been said, is the chief reason that evolutionary biologists think that sex is essential. ☺ Reports of "ancient asexuals" — eukaryotes that have lived without sex for millions of years — have often not held up to close scrutiny. But then there are the bdelloid rotifers, an "evolutionary scandal." The status of these tiny freshwater invertebrates as ancient asexuals has been confirmed repeatedly. And that’s but one of their remarkable quirks.

But, you might say, what is a multicellular metazoan — sexual or asexual — doing on the pages of this blog?

Well, rotifers are small, typically less than 0.5 mm. Bdelloid rotifers were first described in detail in 1702 by Antonie van Leeuwenhoek — but no one realized they were metazoans until 1838. Taxonomically, the bdelloids have an entire class to themselves, with four families and some 460 described species. All bdelloids are female; no males or hermaphrodites have ever been observed. They lack meiosis. Eggs are produced from primary oocytes by mitosis. Their sister class, the monogonont rotifers, have retained the capacity for sexual reproduction, but they don't bother to produce males except when needed for the production of overwintering "resting eggs."

Bdelloids dwell in the most ephemeral of freshwater habitats. Not just in small puddles, but in the transient layer of moisture sometimes found on moss or lichens — even on mushrooms. Dessication is a routine occurrence which they handle with their own particular style of anhydrobiosis. Uniquely, they can withstand dessication at any stage in their life cycle. Add water, and they rehydrate and resume normal life activity and reproduction in a few hours. In the lab, they've been shown to revive after 9 years of "life without water." Few are the competitors, predators, or parasites that can keep up with them. (Click here for a series of pictures of a rehydrating bdelloid.)

Likewise, bdelloid rotifers are highly resistant to ionizing radiation, far more so than any other animal studied including some called the monogonont rotifers. A comparison: in the most resistant arthropod known, a 200 Gy dose produces more than 99% sterility; in bdelloids, a 560 Gy dose causing approximately 500 double-strand breaks per genome reduces fecundity by only 20%. The researchers point out that resistance to ionizing radiation may be an accidental by-product of resistance to desiccation. Both factors cause double-strand DNA breakage. Naturally occurring bacteria that are highly resistant to ionizing radiation, such as D. radiodurans, are also drought-resistant. Although other factors are involved in resistance to desiccation and radiation, the capacity to repair double-strand DNA breaks is essential. Aspects of DNA repair in bdelloids, including its impact on the bdelloid genome, are discussed in detail here and here. 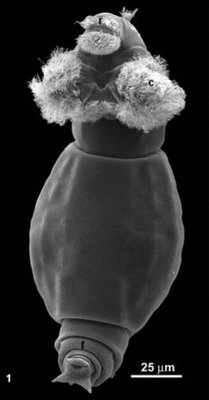 The bdelloid genome contains some mobile elements (e.g., DNA transposons) that are typically acquired by horizontal gene transfer (HGT). These elements are found primarily in the telomeric regions of the chromosomes, and only rarely in gene-rich regions. Most unexpectedly, in the telomeric regions one also finds dozens of non-metazoan genes acquired by HGT. There are bacterial genes, fungal genes, and plant genes — some with no metazoan orthologs. Some are degraded, many are intact, some are intact and transcribed. Most of the intact genes encode proteins with simple enzymatic functions that are not part of multicomponent pathways. There are two bacterial genes for proteins involved in peptidoglycan biosynthesis and two for nonribosomal peptide synthetases. So far, it has not been possible to determine donor species or time of transfer. Some of the foreign genes appear to have resided in the rotifers for a long time, long enough to acquire correctly spliced eukaryote introns and rotifer codon usage patterns. Some appear to be more recent.

Given that few instances of HGT have been confirmed in metazoans and that most of those involve long-term associations with organelles, endosymbionts, or intracellular parasites, it is stunning to find foreign genes by the dozen in these rotifers. The authors speculate: It may be that HGT is facilitated by membrane disruption and DNA fragmentation and repair associated with the repeated desiccation and recovery experienced in typical bdelloid habitats, allowing DNA in ingested or other environmental material to enter bdelloid genomes.

This fortuitous combination of ephemeral habitat and accurate DNA repair mechanisms has likely contributed to the evolutionary success of the bdelloids. Not only have they survived for a hundred million years, but they seem to have speciated as extensively as sexually reproducing organisms. They didn't play the evolutionary game by the rules, but still they won. Scandalous.