« Of Terms in Biology: Metabolomics and Metabonomics | Main | Talmudic Question #49 » 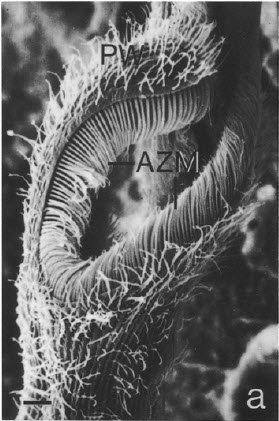 SEM of the wings (PW) of a related folli­culinid, Eufolliculina. (AZM = adoral zone of membranelles). Amazingly elaborate for a unicellular organism – even for a cili­ate! Source

It's not news that coral reefs around the world are in trouble. One obvious symptom of this has been the dra­matic increase in coral diseases starting in the 1980s. There is black band and white band, brown band and yellow band, white pox and white plague, galls and bleaching, and… – all adding up to over 30 different "dis­eases." Likely pathogens have been identified for less than 10, Koch's postulates fulfilled for only a few. Not surprisingly, among the pathogens identified are two vi­brios (click here and here) and a pathogenic fungus. There is also a deadly consortium that closely resembles the microbial mats found in sunlit, sulfide-rich aquatic environments. These mats creep across coral colonies, killing the coral by a lethal combination of high local con­centrations of sulfide and hypoxia. What is surprising is that a new disease has been found to be the work of a eukaryote, a single-celled ciliate.

These ciliates belong to the heterotrichs, a group that in­cludes the well known Stentor. All are exceptionally large for single-cells; some stretch millimeters in length! They typically have complex mouth structures, more than one type of cilia, and the ability to extend or contract their "body."

A new heterotrich, Halofolliculina corallasia, sp. nov., was discovered in 2000. It's a member of the folliculinid family (bottle-animalcules), a group of widely dispersed, predominantly marine ciliates. Their life cycle includes both sessile and free-swimming stages. While sessile, they live within a well-fitting armor of their own making called a lorica. This black, flask-shaped housing is com­pos­ed mainly of tectin (a protein-carbohydrate complex chemically similar to mucus; also called pseudochitin) and pigments. Open at one end, it allows the "wings" of the ciliate – actually its oral apparatus – to protrude into the water for filter-feeding. When chemically or mechanically dis­turbed, the folliculinid retracts its wings, contracts its entire body inside the lorica and then shuts the door. Barnacles and turtles, among others, use similar tactics, but these folliclunids are uni­cellular beings. 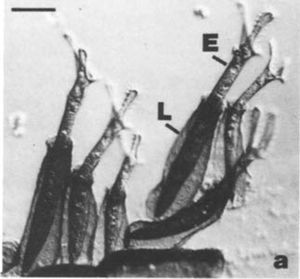 The life cycle of another folliculinid, Metafolliculina an­drewsi, has been studied for decades. Folliculinids re­produce by de-differentiating into a simple larval shape and then dividing. The posterior daughter cell now dif­ferentiates into a half-sized adult within the lorica, while the anterior one swims off. This "swarmer" settles on a surface, such as a shell or a coral, secretes a liquid that quickly sets into a chitinous case, and then again assum­es the adult form. Sounds like our own bacterial Caulo­bacter? Settlement is a commmunity project: the first settlers are joined by more and more swarmers of the same age. Each swarmer trails adhesive material that is thought to facilitate both this flocking behavior and sett­ling. The result is a visible cluster of several hundred densely-packed, newly-secreted loricae.

First described in 2000 in association with diseased corals in the Indo-Pacific region, H. corallasia has now been observed on 24 coral species in the Indo-Pacific and, as of 2004, had spread to the Caribbean. Last year, another ciliate was found associated with brown band disease on corals of the Great Barrier Reef. 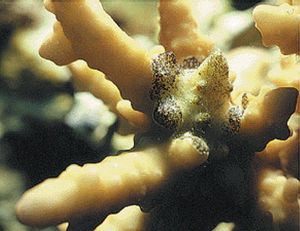 SEB disease on Acropora sp. coral. From the center the ciliates have started to spread over all adjacent branches si­mul­taneously. The loricae are clearly visible. Source

H. corallasia doesn't infect corals in the usual sense of the word, nor does it feed on them. Apparently it simply finds that the coral is a convenient surface to settle on. This is decidedly inconvenient for the corals. With the help of the organic acids of their unhardened loricae and with their spinning motion, the settling larvae penetrate the coral tissue and embed their loricae within the skele­ton. The net result is splintered skeleton and dead coral. Each generation, in turn, settles nearby. The dense black clusters spread across the coral, advancing up to 1 mm per day – a gruesome band with bare coral skeleton in its wake. Thus, the disease name: skeleton eroding band (SEB) disease.

We are left wondering "why now." Difficult to answer, given all the many variables. One reason may be that H. corallasia feeds on bacteria, and bacterial populations in reef waters increase in conjunction with overfishing and eutrophication. For now, times are good for the H. corallasia. Construction is booming, vast reefs await colonization. For the corals? Collateral damage.