The Secret Under the Ice

Translated by permission from his article posted April 17, 2009, on his blog Curiosidades de la Microbiología. 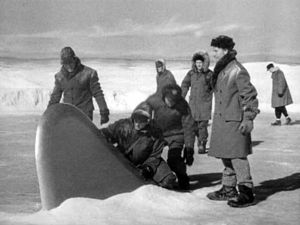 Shot from the '51 movie The Thing from Another World. Source

There is an old science fiction story called Who Goes There that was twice made into a movie. It dealt with a scientific expedition to the North Pole which, under the ice, found an extraterrestrial spaceship carrying alien forms of life. Well, now a real scientific expedition to the Antarctic found a complete ecosystem that was trapped under ice some 1.5 million years ago. The organisms of this ecosystem are of earthly origin, but they may open up the possibility that life exists on other planets.

In the Antarctic, there is a site called Blood Falls, near the end of the Taylor Glacier, near the McMurdo Dry Valleys. This formation comes from a deep subglacial lake about 400 m beneath the ice at its highest point. The striking color is due to the water emerging from the lake being enriched for ferrous iron, which becomes rapidly oxidized to the insoluble bright red ferric ion. The subglacial lake is part of a system of fjords that became trapped when the Taylor Glacier was formed some two million years ago. 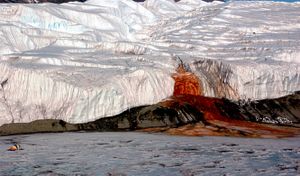 Geomicrobiologist Jill Mikucki and colleagues studied a number of samples collected over a period of six years and found that they contained 17 types of microbes. The results are published in Science, with a commentary. Genomic analysis revealed that these organisms are related to sulfate-reducing bacteria (SRB) that oxidize the scarce organic material in the water, reducing sulfate in the process.

Curiously, these don't use sulfate directly in respiration like their SRB cousins, nor do they convert it all the way to sulfide. Instead, these microbes reduce the insoluble ferric ion to the soluble ferrous ion, which is then oxidized by contact with the air. Sulfate here appears to be used as a catalyst, its reduced form becoming reoxidized by coupling to the ferric to ferrous (Fe3+ → Fe2+) reaction. These microbes appear to constitute a consortium that "breathes" ferric ions. 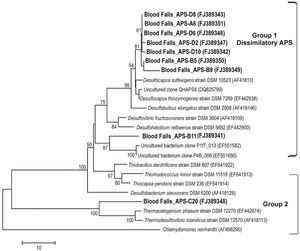 (Click to enlarge)
Phylogenetic tree of sequences of the dissimi­latory adenosine 5'-phospho­sul­fate–reductase in microbes from the Blood Falls. Most are related to the genus Desulfocapsa. Some (group 2) have a closer relationship to Thermodesul­fovi­brio. Source

The water of the subglacial lake contains no dissolved oxygen and has a pH of 6.2. Its temperature is −5º C, but the water does not freeze because its salt concentration is four times that of seawater. The concentration of microbes is about 10,000 per ml. Their generation time was estimated to be 300 days; thus, there have been around one million generations since the lake became encased in ice.

This finding helps explain how life might survive the cold periods proposed by the "Snowball Earth" theory, during which the planet is postulated to have been entirely cov­ered by ice. Moreover, this microbial strategy prompts speculation about life existing in such inhospitable and cold places as Mars or Jupiter's moon Europa – the dream of every exobiologist.

Scheme for how the subglacial mi­crobiota oxidize organic compounds using sulfate as an electron acceptor. Reduced sulfur is reoxidized by reduction of ferric to ferrous ions. Ferrous is soluble and is oxidized to ferric when in contact with oxygen, becoming insoluble and forming reddish precipitates. Source