The Bacterium That Doesn't Know How To Tie Its Own Shoelaces 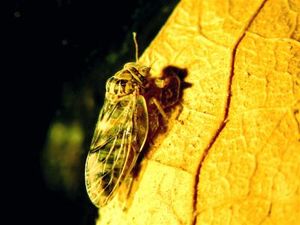 A hackberry petiole gall psyllid just after emerging from the gall on a hackberry. The leaf is yellow because it is autumn. The insect is only 3 to 4 mm long. Credit: Nancy Moran, Univ. of Arizona. Source

A greater microbial wonderland there isn't than the one inside cells of insects. Many, perhaps most, insects har­bor bacterial endosymbionts that are full of physiological, genomic, and structural surprises. To confirm our pre­dilection for the subject, go to Search on the right of this page and enter "endosymbionts." Or read recent reviews (click here or here).

In many cases, bacterial endosymbionts are known to provide their host with needed nutrients, in others their role remains unknown. The classic example is Buchnera, the endosymbiont of aphids. Aphids feed on plant sap, which is rich in sugars but poor in needed amino acids. The bacterium provides them, and thus is essential to its host. Matters can get complicated, as when two endosymbionts partner to synthesize tryptophan, one making an early precursor in the biosynthetic pathway, the other taking it the rest of the way. Partnerships of this sort (actually, ménages á trois) seem not to be unusual. This too we discussed earlier. Other bacterial endosymbionts, notably Wolbachia, manipulate the sex life of their insect hosts for their own advantage. Thus, the world of bacterial endosymbionts of insects has turned out to be ever more varied and strange.

Enter Carsonella ruddii, or, if you’re a purist, 'Candidatus C. ruddii' (because it hasn't been culti­vated outside its host – nor is it ever likely to be).

It has the puniest of genomes among entities that could be called bacteria. With a measly 160 kb or so of DNA, encoding some 182 proteins, it is the smallest "bacterial" genome published to date (but we've heard that even smaller ones are soon to be reported). The host of Carsonella is a psyllid, in particular the hackberry petiole gall psyllid. Psyllids are also known as the "jumping plant lice." 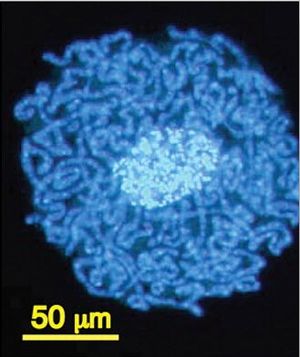 A psyllid bacteriocyte with tubular Car­son­ella surrounding the nucleus. DNA is stained with DAPI. Source

Is such a tiny genomic endowment sufficient to sustain life? Among the missing genes are some mightily essen­tial-sounding ones, for example, some needed for mak­ing ribosomes, for DNA replication, and for membrane functions. Can such a creature really be called a bacte­rium? Is Carsonella on the way to becoming an organelle? If so, what good is it to the host? Genes required for making several of the amino acids needed by the host (e.g., histidine, phenylalanine, and tryptophan) are ab­sent or nonfunctional. On the other hand, if it doesn't pay for its upkeep in some manner, how come host cells are loaded with so many carsonellas?

It's true that the Carsonella genome is extraordinarily streamlined, ergo efficient. For instance, 90% of its ORFs overlap in at least one direction. Ninety-two percent of them are tandem out-of-frame overlaps on the same strand. Carsonella ORFs are close to 20% shorter than those of other intracellular insect endo­sym­bionts. But, efficient or not, the Carsonella genome is smaller than that of some mitochondria and chloroplasts, both of which require the products of many genes that they previously transferred to the host's nucleus. Is this the case here? We don't know yet because no hosts of Carsonella have been completely sequenced. So, how does Carsonella get by with what is left in its genome? It hardly seems to be large enough to sustain life as we know it.

What are the other possibilities? Rather than getting required gene products from Carsonella genes in the nucleus, could some instead be provided (by a kind of prokaryotic empathy) by "nu­clear" mitochondrial genes? Such proteins would have to be targeted to both the mitochondria and the symbionts. Another possibility is that there could be another bacterial endosymbiont lurking somewhere, but as yet none have been found. Or, as seems even more unlikely, could our catalog of required genes be in part erroneous, with the genes present in Carsonella actually be­ing sufficient for life?

We have some information about gene transfer from endosymbionts to Buchnera-carrying aphids. However, the meaning of this is murky because these genes are derived from α-proteo­bac­teria, whereas the Buchnera are γ-proteobacteria. 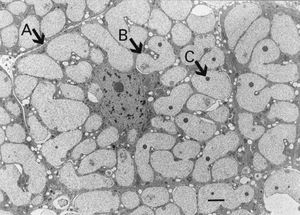 Carsonella presents further enigmas on the cellular level. Its cells are extremely long tubules, many tens of μm in length and around 5 μm in width. They don't look like re­gular prokaryotes in EM sections because, among other things, there is no sign of a nucleoid. (Is their DNA con­tent so small as to escape visualization?) They look like nearly uniform bags of ribosomes, except for some mys­terious electron-dense inclusions. In fact, the creatures don't look like anything, bacterial or otherwise, that we can recall. Let's expect that further attention will be paid to the structure and morphology of these unusual creatures.

If these questions were not enough, let us add one more: Are such endosymbionts destined for further reduction, possibly with catastrophic consequences to themselves and, who knows, maybe even their hosts?

Here's a question for the astute among you (all our readers are astute by definition): What would it take to answer all those earlier questions? Which -omics would you go for first? More genomics of hosts, proteomics of the symbiont, transcriptomics of both? If we were grant-granting agencies, we'd be hard put to know which to fund first.