(E) TEM of swollen nucleus with endo­nukes in longitudinal and cross-section. The chromatin has been reduced to narrow remnants along the nuclear membrane. (G) TEM of endonukes show­ing electron dense particles distributed throughout the cells. Source

Certain mussels called "bathymodiolins" are part of the spellbinding fauna of the dark world of oceanic hydro­thermal vents and cold seeps. Similar to other metazoans in that realm, they rely on chemosynthetic bacteria for their nutrition. These mussels possess symbionts from two clades of γ-proteobacteria: chemoautotrophic sulfur oxidizers that fix CO2 using sulfide or thiosulfate as their energy source, and methane oxidizers that use methane for both carbon and energy. The symbionts are well-housed in specialized cells (bacteriocytes) in the gills of the mussels where the constant flow of water brings the needed substrates to them. A pleasant mutualistic ar­rangement.

Recently researchers, using 16S rRNA analysis, found a member of a third clade of γ-proteobac­teria in the gills, for which they proposed the descriptive name 'Candidatus Endonucleobacter bathymodioli'. We'll refer to them as the endonukes, if it's okay with you. These are parasites with an atypical lifestyle. FISH probes specific for this bacterium found them most frequently in the gills, but only in symbiont-free intercalary cells (in between the bacteriocytes), and only in their nuclei. When an endonuke infects a nucleus, it feeds on the chromatin, and reproduces – ultima­tely killing the cell and releasing thousands of progeny (see figure). Since they do not infect the bacteriocytes, the host's nutrition is not curtailed and the mussels seem to be unaffected. 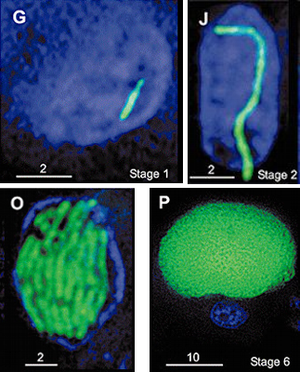 Developmental stages of the endonukes within gill tissues of the mussel, Bathy­mo­diolus puteoserpentis. The images are projections of a stack of several two-di­mensional layers, thus reflecting the overall 3D structure in two dimensions. Green = endonuke. Blue = nucleus. Series shows the progression from a single short rod (G) to an unseptated ~20 μm filament (J), to stacks of shorter filaments (O). Continued reproduction yields an aggregate up to 30 μm in diameter, containing an estimated 10,000–80,000 bacteria. The nuclear membrane then ruptures, releasing the endonukes into water flowing through the gills. Source

Rare are the bacterial parasites known to infect cell nuclei. Rickettsial α-proteobacteria occasionally invade nuclei of their arthropod or mammalian hosts, but ty­pically are found in the cytoplasm. (In our earlier post about rickettsiae infecting mitochondria, we included a photo of rickettsiae in nuclei.) The authors suggest that the endonukes are far from rare. Already they identified them in mussels from 11 hydrothermal vents and cold seeps from around the globe. Members of their clade, known only by their 16S rDNA sequences, have been found to be associated with diverse marine animals in­cluding sponges, corals, clams, sea urchins, and fish. They might be associated with your next seafood combination plate.

Why the nucleus? Good food seems like one good rea­son; DNA is rich in nutrients. Should we coin a term? Which would you prefer: karyophagy? chromatophagia? or some other?