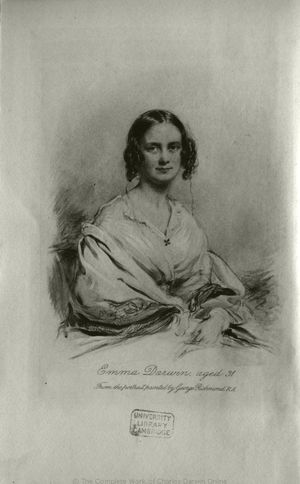 Portrait of Emma Darwin, after a painting from the late 1830s by George Rich­mond. Source

Just when you thought that everything conceivable has been written about Charles Darwin on his bicentennial, a revealing perspective on his wife, Emma, appeared in the journal International Microbiology. Written by the distin­guished science writer Mercé Piqueras, the article sheds light on many aspects of the relationship between Em­ma and Charles, including their correspondence while he was traveling on the Beagle. Of particular interest is the clash between her theistic beliefs and his agnosticism. They both learned to live with it.

Mercè also offers a rich eclectic blog in Catalan, La lectora corrent (The Common Reader, à la Virginia Woolf) where she shares her passion for language, science, and spread­ing the word. It's also available in English and Spanish, but beware! It’s machine-translated.

If you are interested in Emma Darwin, I suggest that picking up a copy of the book "Mrs. Charles Darwin's Recipe Book: Revived and Illustrated" by Dusha Bateson and Weslie Janeway. Perfect for a Darwin-themed dinner party or makes the perfect gift your favorite evolutionary biologist! Try the cheese straws: mix 1.5 oz plain flour, 1.5 oz Parmesan cheese (finely grated),.75 oz butter, a pinch of cayenne pepper and a little salt until blended. Then add 1/4 cup of milk or until the pastry shows signs of coming together. Knead, roll, cut the dought into strips. Bake at 325 degrees Farenheit for 20 minutes or until golden brown. Transfer to a wire rack to cool.

How lovely! Thanks for such a nice contribution.