« About Our Talmudic Questions | Main | The Viral Selenoprotein Theory » 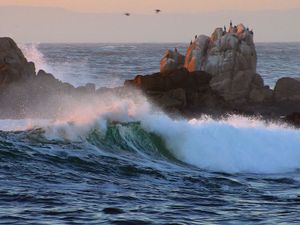 It’s seldom that a bug has a negative effect on me. It's usually just the opposite: bugs make my day. But this time, some kind of bronchitis virus prevented me from going to a meeting that I would have truly loved to at­tend. The Integrated Microbial Biodiversity Program, under the umbrella of the Canadian Institute For Ad­vanced Research (CIFAR), recently held their annual meeting in Asilomar, California. The location speaks to their willingness to transcend national barriers; the program, their transcending of conventional academic barriers, as well. The papers covering numerous eco­logical and evolutionary aspects of microbial life were presented by leading investigators from Canada and beyond. Included were such luminaries as Tom Cavalier-Smith, Ford Doolittle, Jonathan Eisen, Patrick Keeling, Forest Rohwer, and Curtis Suttle, to name just a few.

I had been asked to present stories from this blog, something that I have done with pleasure at several other venues. But this one would have been extra special. On all accounts, I missed out on what was truly my kind of meeting.

CIFAR has assembled a team of leading researchers from across Canada and around the world that is capable of taking on the monumental task of exploring this astounding universe of bacteria, viruses, and other microbes.

CIFAR’s Integrated Microbial Biodiversity program is transforming human understanding of the web of life, and changing the way we approach medicine and health, environmental sustainability, and evolutionary biology itself.