Say, Brother, Can You Spare a DNA? 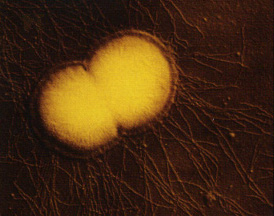 Mention horizontal gene transfer (HGT) in bacteria, and what comes to mind is the acquisition of new traits and capabilities across large evolutionary distances. Not so for the neisseriae. For them, HGT is a means to swap genes with other members of the species and to main­tain the status quo in the face of assault on their genome by host defenses.

Infection by the human pathogen N. gonorrhoeae is met by the rapid recruitment of polymorphonuclear leuko­cy­tes (PMNs) to the site. PMNs are professional phagocytes that use a combination of antimicrobial proteins and re­active oxygen species (ROSs) to kill the engulfed invaders. Their ROS attack is effective against the gonococci and quickly kills the majority of them. However, a subpopula­tion not only survives within the phagosomes, it also replicates. A number of factors enable the gonococci to do this. An important one is having a means to repair the DNA damaged by the ROSs. This is where the HGT comes in. 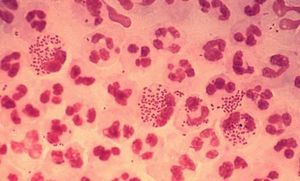 A Gram stain of the urethral exudate from a patient with gonorrhea. Source

The neisseriae, including the gonococci, have a superb HGT capability that enables them to exchange DNA among themselves while excluding useless or potentially damaging foreign DNA. Genetic transformation (not transduction or conjugation) is their only known means of HGT, but it serves them well. As summarized by one researcher:"Taken as a whole, the evidence suggests that an important benefit of transformation in N. gonorrhoe­ae is recombinational repair of oxidative DNA damages caused by oxidative attack by the host’s phagocytic cells."

How does this work? Gonococci are both naturally competent and able to recognize their own DNA. Distributed throughout their genome are repeats of a conserved sequence called a DNA Up­take Signal (DUS). The minimum signal required for transformation is a 10-mer (5'-GCCGTCTGAA). There are lots of these repeats, approximately 1900 of them per genome, which makes for roughly one every 1200 bp. Thus gonococci dedicate about 1% of their genome to these signals. Must be important. 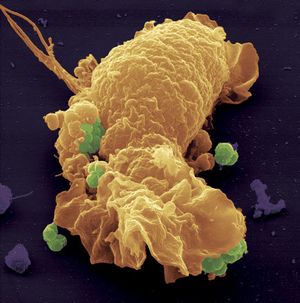 DUSs are sprinkled throughout the chromosome. A third of them are located within genes; a quarter of all coding genes contain a DUS. The more DUSs present within a DNA fragment, the greater its transformation efficiency. DUSs occur more than twice as frequently in 3R genes – genes involved in DNA repair, replication, and recombi­na­tion – which suggests that those genes would be picked up more often.

This much of the story is not unique to the neisseriae. There are more than 60 known naturally competent bac­terial species. Selective DNA uptake has been observed among many of them. A search of eight sequenced ge­nomes from the family Pasteurellaceae found conserved uptake sequences in all of them, and all eight show se­lective DNA uptake. Further investigation of Haemophilus influenzae found their uptake sequences also to be more frequent in their 3R genes.

The next step for the gonococci is to bring the recognized DNA into the cell using a type IV pilus system. Double-stranded DNA is channeled across the outer membrane. One strand then passes into the cytoplasm, the other is degraded in the periplasm. Once inside the cell, the DNA can be inserted into the recipient's chromosome by RecA-dependent recombination. RecA and DNA recombinational repair enzymes were demonstrated to provide one means of protection against oxidative damage caused by H2O2. 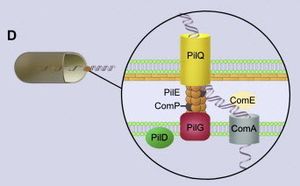 DNA uptake mediated by a type IV pilus system in N. gonorrhoeae. The pilins PilE and ComP are assembled to form a com­petence pseudopilus. Double-stranded DNA is channelled across the outer mem­brane through a pore formed by the PilQ multimer, and periplasmic dsDNA is bound by the membrane-anchored re­ceptor ComE. Then, single-stranded DNA enters the cytoplasm through the chan­nel protein ComA, while the other strand is degraded outside the cytoplasmic mem­­brane. Source

But this is only one side of the story ­– the uptake side. What about supply? It has long been known that some bacteria, including the pneumococci and streptococci, have ways of increasing the supply of closely-related DNA. They use quorum sensing so as to induce compe­tence only when surrounded by many of their own kind, and combine this with fratricide to liberate potentially useful DNA into the medium. In contrast, actively growing neisseriae secrete chromosomal DNA into the medium without cell lysis, using a type IV secretion system (not to be confused with the unrelated type IV pilus). The se­creted chromosomal DNA is readily taken up by recipient gonococci and incorporated into their genome by trans­formation.

Their type IV secretion mechanism is encoded by a geno­mic island that is related to the conjugative F-plasmid of E. coli and that has all the earmarks of having been ac­quired by HGT, albeit long ago. Eight separate mutations were made in genes located on the genomic island that were predicted to be required for type IV secretion. All were found to eli­mi­nate DNase I-sensitive DNA secretion and to greatly reduce transformation. As of 2005, this was the only DNA secretion system known that does not require direct cell-to-cell contact.

Apparently the gonococci make very frequent use of transformation, so frequent that, to quote one researcher, "the entire genome is in flux, each gene undergoing recombination with imported DNA." This abundant transformation affects other genes, such as those involved in antigenic va­riation, while also providing a way to maintain core housekeeping genes damaged by ROS attack. Plus ça change, plus c'est la même chose.

Having thought about this some more, I will add a question. Does this tie together biofilms, competence, and antibiotic resistance, all to the function of type IV pili? And another question, how does this potentially relate to the structural role of extracellular DNA in biofilms (now widely acknowledged in many papers)? I think we will all have to relinquish our reductionist ideals, and admit that many things in bacteria have multiple functions - perhaps that is the rule, and catabolic enzymes like beta-galactosidase are the exception?

PS-Thanks, Merry, for the followup! I got sidetracked, as usual...

Merry replies:
And thanks, Paul, for the perfect lead-in to Elio's post for Monday (The World is Pleiotropic).