The World Is Pleiotropic 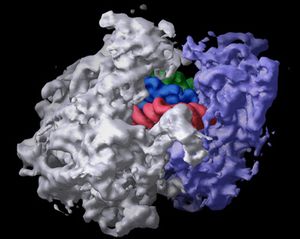 The bacterial ribosome is composed of three
different RNA molecules and more than 50
different proteins. Source

So there! By this rash assertion I mean that in the biological world almost every macromolecular constituent is likely to function in more than just one way, that is, is pleiotropic. One and the same protein may be enzymatic, regulatory, and structural; one nucleic acid, informational, structural, and regulatory; and so on. Clarence Jeffery called this "moonlighting."

Most biologists know this, but how many think it's a big deal? I do, based on little more than the belief that living things are parsimonious and make efficient use of their parts. Doesn't it seem reasonable that our own 30,000 or so genes (a puny number, one would think) each encode many functions?

Linc Sonenshein put it well in a recent email:"I believe that within 10 years, we will view all proteins as presumably multifunctional, that is, we will view monofunctional proteins as a rarity. It took us so long to come to this realization because we were raised on the one gene-one enzyme dogma and the great specificity of biological reactions, implying highly specialized functions that evolved to be the best they could be. It never occurred to us that cells (bacteria in particular) learned to do things that we hadn't thought of or that every protein is a compromise between the ideal for one of its functions and the less-than-ideal version that has the ability to carry out a second function".

Now for something more specific. But first, a disclaimer: "function" can be taken in many ways, cutting across biochemical and physiological categories. I don't want to get into this here, thus will use "multifunctionality" in a broad sense. I hope that’s OK with you. 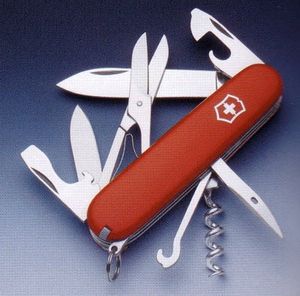 A paragon of multifunctionality. Source

A recent review focuses on the multifunctionality of one particular set of proteins, those of the ribosomes. The numerous ribosomal proteins are juicy candidates. By definition, they are integral to the ribosomes and thus intimately associated with various RNAs and with translational activities. Evidence that they can also play a role in transcription has been accumulating for some time. Already by 2000, ribosomal proteins were front-and-center in a review entitled Proteins shared by the transcription and translation machinery.

The multiple functions of one ribosomal protein, S1, are an old story in microbiology. It's been known since the mid 1970’s that the RNA phage Qβ uses a replicase composed of four subunits, one of which is indeed ribosomal protein S1. Two others are also borrowed from its E. coli host: the protein-synthesis elongation factors EF-Tu and EF-Ts. Thus only one of the four is phage-encoded. Protein S1 is a master of versatility. In E. coli it is required for ribosomes to recognize the translation initiation codon of most messenger RNAs; it stimulates a phage T4 endoribonuclease to inactivate some unneeded phage mRNAs by cleaving them in the middle of their Shine-Dalgarno sequence; and it seems to help out other ribonucleases, as well.

Other ribosomal proteins also moonlight. In E. coli their moonlighting balances the rate of their own synthesis with the rate of transcription of ribosomal RNAs. When ribosomal RNA is abundant, the proteins bind to it. But when the ribosomal RNA is in relatively short supply, they bind instead to their own mRNAs, thus acting as operon-specific translational repressors. For an example of a structural study of such interactions, click here. Some are involved in negative regulation. For example, ribosomal protein S2 serves as a negative regulator of the in vivo expression of both itself and a translation factor. The list goes on. Nearly 2/3 of the ribosomal proteins from the large (50S) ribosome subunit of E. coli have an RNA chaperone activity that ensures proper assembly of the ribosome. And four of the components of NUS, a transcription termination complex, are ribosomal proteins (S4, L3, L4 and L13). The list goes on and on...

Enough of bacterial fun. The examples of extra-ribosomal employment of ribosomal proteins extend to the eukaryotes, as well. The review we mentioned makes the case that ribosomal proteins also serve as sentinels for the self-evaluation of cellular health. Perturbation of ribosome synthesis frees ribosomal proteins to interface with the p53 system, leading to cell-cycle arrest or to apoptosis.

Multifunctionality in proteins ought to give genomic annotators conniptions. Enough to drive them up a multifunctional wall.

Heck, even recA in prokaryotes has a variety of unusual functions...that we know of so far!

Excellent post, Elio. This kind of thing should teach humility to all scientists: we aren't quite as smart as we think we are, sometimes!