« The Viral Selenoprotein Theory | Main | Life in a Big Mac »

Fine Reading: In the Company of Ciliates

Organisms such as ciliates that dine daily on bacteria run the risk of getting an infection. Indeed, ciliates – large, complex cells – are host in nature to gazillion different bacteria that they acquire primarily through phagocytosis at their "mouth." Resident bacteria are generally termed sym­bionts even though only a few of them have been studied enough to reveal the nature of their intimate relationship. The stories of those chosen few are recounted in an engrossing review by Hans-Dieter Görtz. 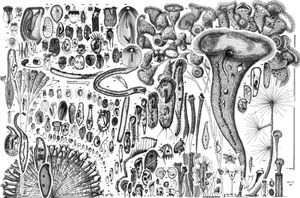 (Click to enlarge) Some ciliated protozoa found in lakes and rivers. Those placed towards the top left are typically found in the open water of lakes; those close to the centre at the base are all anaerobic. The remainder are generally found in sediments and detritus, and attached to submerged surfaces (e.g. aquatic animals and plants). All are drawn to scale (bar at the right-hand side = 1 mm). Source

These appear to generally be ancient relationships, on-going long enough that the partners have adapted to one another in complex ways. For the bacteria, the relation­ship tends to be obligatory. The ciliates, on the other hand, can mostly get along quite well when cured of their infections, at least under lab conditions. But, as usual, there are exceptions. One Paramecium has its needs for folic acid met by its Lyticum flagellatum symbiont; several freshwater Euplotes species die without their Polynuc­leo­bacter necessarius symbionts (aka "omikron particles"). And sometimes, as suggested in the case of the endonuc­lear symbionts to be featured in our next post, the sym­bionts may be beneficial under particular environmental conditions.

Some symbionts run offense for their host. Witness the Caedibacter, first known as "kappa particles," that convert their Paramecium hosts into "killers" that make toxins that kill "sensitives" of the same or other strains. Those that kill only during conjugation are termed "mate killers." Enough said. Others run defense, notably the Verruco­microbium that resides as an ectosymbiont on Euplotidium and was featured in one of our first posts. Those associated with ciliates that live in hydrogen sulfide-rich anaerobic environments (such as in animal rumens or sewage sludge) are attracting more attention in this era of climate change because many of them produce methane.

Many more fascinating stories are undoubtedly yet to come. Optimistically, the author notes that the lag in their investigation "may be partly due to the fact that intracellular bacteria could not be investigated with classical microbiological methods, since they cannot be grown outside their host cells. With the new powerful techniques for detection and phylogenetic classification such as po­lymerase chain reaction (PCR) and fluorescence in situ-hybridization (FISH) now available, this is changing. We can hardly wait."

Our thanks to Mark Martin for calling this fine paper to our attention.