Life in a Big Mac 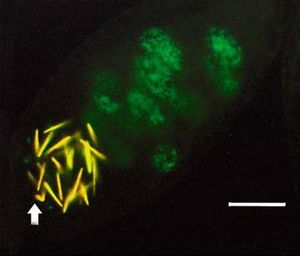 IFs make it to the Mac. Image of P. cau­datum fed a mixture of prey bacteria (green) and IFs of H. obtusa (yellow). The IFs (arrow) are in the Mac, the prey bacteria in food vacuoles. Bar: 25 μm. Source

From the bacterial point of view, a paramecium is a mi­crocosm offering several tempting niches for coloniza­tion. When you collect a paramecium from nature, it's likely to have hundreds – even thousands – of bacterial endosymbionts on board, in different locations. Some will likely be in the cytoplasm, others in other cellular compartments, including the nuclei. To remind you, the ciliates evolved their own particular approach to nuclear compartments. They have two kinds of nuclei, macro­nuclei (we'll call them Macs) and micronuclei (Mics), ty­pically two or more of each. The Macs carry out all the RNA transcription during normal vegetative growth; the Mics transmit the germline genome to subsequent ge­nerations. Both the Mics and the Macs are hosts to spe­cific symbionts. While locations in mitochondria and nuclei have been observed for bacterial pathogens of animal cells, they are relatively uncommon.

So far, nine endosymbionts are known to live within the nuclei of paramecia, about half in the Mics, half in the Macs. These nine species, α-proteobacteria all, have been lumped together into the genus Holospora because of their similar cytology and lifestyle. Their closest known relatives are Rickettsia and Ehrlichia. They all appear to be obligate endosymbionts, that is, are not known to live outside their hosts. All are host-specific and nuclei-specific.

Structure of the IF of H. obtusa. Source

Life in a Mac has its perks, such as a goodly supply of nu­trients and protection from cellular defenses, including lytic enzymes. But what's an endosymbiont to do when the host cell mates? During this process, the Macs are digested along with the symbionts. New Macs formed after conjugation are free of bacteria. This may be one reason why, unlike the cytoplasmic symbionts, all of these species are infectious, that is, they are capable of horizontal transmission.

Quite a bit is known about Holospora obtusa, a symbiont living in the Mac of P. caudatum. Its life cycle includes two stages. The reproductive form (RF) is a short rod, 1–3 μm by 0.5–1 μm, that grows and divides by binary fission within a Mac. Some RFs differentiate into an infectious form (IF), long rods 5 to 20 μm in length. This is a dramatic transformation, involving the replacement of 60% of their proteins, along with marked changes in cell structure. 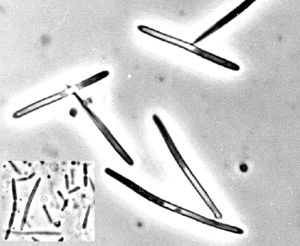 Phase contrast micrograph of IFs outside the host. Inset: After the IFs enter a Mac, they undergo multiple divisions to give rise to RFs. Three constrictions can be seen in the IF on the left. Source

Both forms coexist, intermingled, in the Mac until the host undergoes mitosis. At that time, some of the RFs move to the poles of the dividing Mac, thus ensuring that each daughter nucleus will inherit a share. Meanwhile, the IFs are destined to be released from the cells via a special, dedicated structure. They gather in a cluster in a central bridge that forms as the daughter Macs pull apart. This structure is seen only in symbiont-bearing paramecia, not in "cured" ones. As the daughter nuclei separate, the bridge breaks away from the Mac to form a membrane-bounded structure that travels through the cytoplasm to the cytoproct (the quasi-anus of ciliates), there to be discharged into the environment.

The IFs can remain viable for weeks outside a host cell. They have a unique structure, the hallmark being a massive periplasm filled with proteins required for successful infection. IFs are ingested by paramecia along with other bacterial prey. But instead of being digested, they escape from the phagosome and journey – periplasm tip first – through the cytoplasm. They arrive at the Mac 30 minutes later. This process involves several fancy membrane fusions and evaginations. Host actin is also required. Once in the nucleus, the IF constricts transversely, dividing to form 4-10 RFs. The cycle is then repeated. 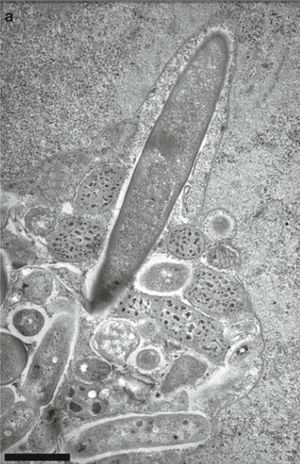 A recently ingested IF escaping from a phagosome that is filled with other prey bacteria. Bar: 1.0 μm. Source

Many observations suggest a long shared his­tory be­tween H. obtusa and P. caudatum, the intimate commu­nications between them during infection being one. Here are some others. The association seems to be quite spe­cific. If you experimentally infect a different species of paramecium with H. obtusa, the IFs make it into the Mac, but within 24 hours they are deported to the cytoplasm, often in fragments, and "shat out" via the cytoproct. Al­though P. caudatum can get along just fine in the lab when cured of their endosymbionts, some natural iso­lates have H. obtusa on board, especially when collected in cold climates. In the lab, paramecia with H. obtusa endosymbionts do better in colder temperatures and also better handle rapid heating from 25 °C to 35 °C.

The symbionts alter host gene expression, up-regulating several genes and down-regulating others. Reproduction of the RFs in the Mac requires some proteins made by the host. Are these endosymbiont genes that have been transferred to the host genome? Initial estimates indicate a reduced genome size for the endosymbiont, about 1.7 Mb, but evidence of gene transfer must await genomic data.

Endosymbioses have a way of fascinating us. The very idea! Bacteria living within the organelles inside cells? When sketching a eukaryote cell, we draw a membrane around it, and around the nucleus and the other organellar compartments. These membranes mark serious boundaries. But endosymbionts remind us that such boundaries can be doorways – if you know the right incantation.