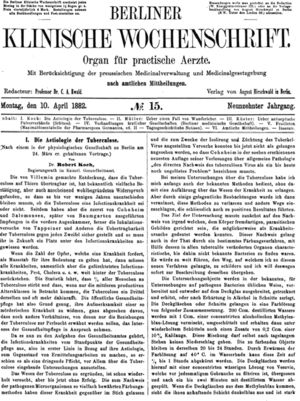 (Click to enlarge)
The title page of Robert Koch’s original article, The Etiology of Tuberculosis,  pub­lished in the Berliner Klinische Wochen­schrift, April 10, 1882

Rarely does news come along that threatens to overturn our cherished beliefs. Since early after the discovery of tubercle bacilli by Robert Koch in 1882, the mycobacteria have been considered not to be spore formers. Now this is being challenged by a new report.

The genus Mycobacterium encompasses a number of major human pathogens including M. tuberculosis, among the most common pathogens carried by humans. A hallmark of M. tuberculosis infections is the ability of the organism to persist asymptomatically for long per­iods in the host, and then reappear and cause disease. The new paper by Ghosh et al. from Uppsala University in Sweden claims that members of some Mycobacterium species form spores that resemble those produced by well-studied Bacillus species. The authors worked pri­marily with M. marinum, a relatively fast-growing myco­bacterium with a doubling time of 4–6 hours. In old cultures they observed forms that resembled spores not only in their morphology and their resistance, but also in their accumulation of dipicolinic acid, a signature molecule associated with spores of Bacillus species. Putative spores were also observed in old M. bovis cultures. In addition, they found that Mycobacterium genomes, including that of M. tuberculosis, contain homologs of genes important for sporulation of the model spore former, Bacillus subtilis. At least some of these genes were transcribed only in old M. marinum cultures.

These observations would certainly be a paradigm shift in Mycobacterium biology, particularly regarding our thoughts about the reasons for the latency of mycobac­terial infections. Given the revolutionary implications of these conclusions, it is obviously imperative that a high standard of proof be applied to such work. This is of special concern for the mycobacteria, since these organ­isms grow more slowly than many Bacillus species (doubling times of ~30 min); consequently, the potential for contamination of old cultures with a much faster growing known spore former is a major concern. The authors have done a variety of control experiments to establish that the spores formed in their cultures are indeed from M. marinum rather than some contami­nat­ing known spore former, but skepticism about such a novel finding will certainly not be (and indeed should not be!) obviated by this first report. One would expect that this work will be rapidly replicated and extended in other labs, including analysis of the DNA in the purified spores and examination of additional Mycobacterium species for spore formation. If their conclusion that mycobacteria are indeed spore-formers holds up, it will truly be a paradigm shift. It will be fascinating to watch this story unfold, with either the con­firmation or refutation of this initial report. 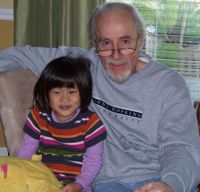 Peter Setlow is Professor of Molecular, Microbial and Structural Biology at the University of Connecticut in Farmington, CT. The sparkly young lady to his right is granddaughter Anne.