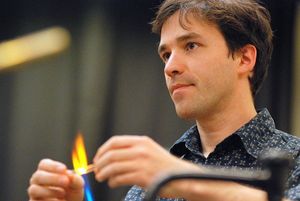 I was on leave from teaching for a couple of years. The summer before re-starting my third year Protistology course I began to think about some things I wanted to change. One thing I wanted to do was to add a section on the history of microbiology to put things into perspective and hopefully connect students with the material a bit. My colleague, Max Taylor, had a replica of a van Leeuw­en­hoek microscope that he once showed to me, and I thought it would be fun to make one as close to the ori­ginal design as possible to show the class what it was like. I did some superficial snooping around about how it was built, including finding the original paper in the Pro­ceedings of the Royal Society where he described the de­sign. I realized it would be pretty straightforward, includ­ing making a lens that was pretty close to the ones he would have used.

Deep down I knew that this was mostly to find some excuse to buy an anvil because, seriously, what kind of guy does NOT want to have his own anvil? So, one anvil, a big hammer, and a bit of brass later, I had made all the components for two Leeuwenhoek microscopes. I later found a su­perbly detailed web page describing how to do it that would have saved a lot of trial and error (especially my mistake in threading both holes in the L-shaped piece that connects to the micro­scope plate to the stage), a source that I would recommend to anyone who wants to make one of these. 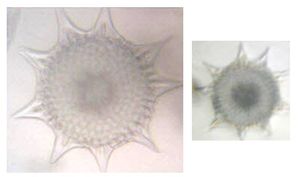 Comparison of the same Radiolarian skeleton with two different microscopes. At left is a commercial McArthur-Cooke field microscope set at 400X. On the right is the same skeleton photographed with the same camera (a Canon Elph) and at the same scale (showing the power of this lens to be about 200X). Source

One of the big surprises for me was how easy it was to make the lens without any grinding. Again, there are loads of web pages with great instructions to make one of these bi-convex lenses (e.g., the one linked above), and I recommend them for anyone serious about wanting to replicate one of these microscopes. But it also got me to thinking: my idea of showing a replica microscope to my class would be alright, but it would be way better still to have them actually make and use one themselves. The lens is the intimidating part, but that was easy, so what about the rest of the microscope?

It is immediately obvious that the plates that sandwich the lens can be made of stiff paper, but devising a me­chanism to hold the sample and focus it was harder. I tried a few solutions that were overly com­plex, not to mention failures, but then had an idea to use sticky tack. This is the gummy stuff used to hold posters up on the wall. It is not only sticky, but also has great elastic properties, so you can use it to mount all kinds of samples in front of the lens and also to pivot the sample away from or towards the lens. This, in a stroke, eliminates the two biggest design problems with a paper mi­croscope, and I think that if Leeuwenhoek had sticky tack in the seventeenth century, he would have used it, too. 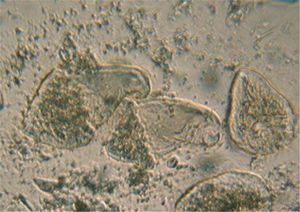 A example of an image with a lower magnification lens of live cells in liquid on a cover glass. This is the hyper-mastigote parabasalian Trichonympha from the hind­gut of the termite Zootermopsis an­gusticolis. Source

In any case, I made a few of these and they all worked well and were easy to put together, so I set up the first three labs in my class to tie into lectures about the his­tory of microbiology and taxonomy. The students made their own microscopes, measured the size of their lenses, and calculated the power, thus learning something about optics. They then used them to observe natural samples. After that, they observed the same samples with the 1960s technology at their disposal in the lab, so they experienced how it felt for the pioneers of microbiology.

All of the students made decent microscopes. Indeed, this class has a lab exam at the end of the first term, and for one of the 'stations' during the exam they were not given a microscope. Instead, they had a fixed slide, a Pasteur pipette, some paper, and a Bunsen burner. They were given 10 minutes to make a microscope that was good enough to identify the protists on the slide. Happily, the students aced this question, so technically this project is pretty accessible.

It also seemed pretty popular with the students. A little while later I was asked to demonstrate the lab to some public school teachers at a professional development day organized by David Ng and Joanne Fox at UBC (who posted a couple movies from the day on YouTube). Myself and the TA from my class, Gillian Gile, taught 90 teachers how to make one, and again it seemed pretty po­pular. Some teachers have already used the exercise in their class, and a couple reported back that it worked well with students of a broad range of ages. One teacher even told me that she was going to include protistology in her curriculum in the future so the lab had better context, which I thought was great. I have also had a couple students demonstrate this directly to public school students and report back that it was popular and successful.

Overall, this has been a great experience. I find that getting people interested in microbiology and microscopes is challenging, I think because the microbial world is so abstract to them. By delving into the history, the students experienced a fascination akin to that felt by many young students in physics when encountering the history of its pioneers. But being able to build a sixteenth century microscope yourself is better still (and although you don’t need an anvil, you still get to play with fire and use a drill, so it is a lot of fun!). I would recommend trying this with any class or lab from high school up to senior undergrads, and if you do please let me know how it goes, or if you can suggest any improvements.

I made a set of instructions and posted them on my web page, so anyone should be able to quickly make one of these, and teach their class how to do it too.

Patrick Keeling is a scholar of the Canadian Institute for Advanced Research, Evolutionary Biology Program, and assistant professor, Department of Botany, University of British Columbia.