« Making Waves at Asilomar | Main | Fine Reading: In the Company of Ciliates » 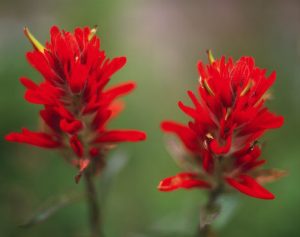 Figure 1. Indian paintbrush in bloom. These plants absorb selenium from the soil and concentrate it in their tissues. The edible, sweet flowers were con­sum­ed in moderation by various Amerindian tribes as a condiment. The high selenium content, especially in roots and green parts, makes it potentially toxic in large quantities. Source

Just when you thought that HIV has bared all its secrets, new ones come along. The HIV genome encodes 3 main polyproteins and six regulatory proteins. Like all other vi­ruses, HIV relies extensively on the host for replication; of course, what sets it apart from most other viruses is its re­markable ability to integrate into the host genome and lie dormant for long periods of time.

Almost all the identified ORFs of HIV have been implicated in its pathogenesis. However, recent bioinformatics reports suggest that HIV may in fact encode for additional frame-shifted proteins. This is a fascinating story that didn't start with HIV. The frame-shift is brought about by RNA struc­tures called pseudoknots. A pseudoknot is defined as "an RNA secondary structure containing at least two stem-loop structures in which half of one stem is intercalated between the two halves of another stem." The pseudoknot structure was first recognized in the turnip yellow mosaic virus in 1982.

Using software that predicts the existence of RNA pseudoknots, and hence the possibility of frame-shifted proteins, the existence of three new HIV proteins was deduced. These frame-shifts occur in the HIV protease, reverse transcriptase, and envelope protein sequences. Both the pro­tease and reverse transcriptase are targets of existing anti-retroviral drugs, which make studying these new frame-shift proteins exceedingly important. 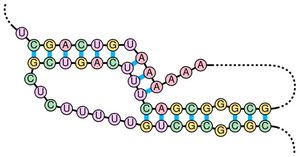 Example of a naturally occurring pseudo­knot found in the RNA component of human telomerase. Source

Most surprising is that all three frame-shift proteins are selenoproteins, that is, they contain selenocysteine re­sidues. Selenium is a trace element found in the soil and is a micronutrient essential for cellular activities. It is found in the active centers of reducing enzymes like glutathione peroxidase, thioreductase, and deiodinizing enzymes. Selenoproteins are found in almost all forms of life. In order to make selenoproteins, some UGA codons (otherwise termination codons) must be read as en­coding selenocysteine, which requires an upstream RNA structure called the Selenocysteine Insertion Sequence (SECIS). Bioinformatics studies reveal the presence of these structures in HIV’s Long Terminal Repeats (LTRs). 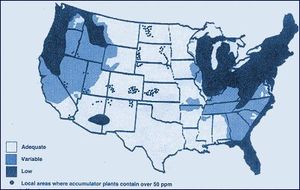 A current hypothesis for the role played by selenium in HIV infection is that HIV selenoproteins sequester se­leni­um and thus deprive the body of it, resulting in chronic selenium deficiency. Selenium deficiency can cause wasting and lowering of immunity and, most likely, the other classical symptoms of AIDS. Since selenium mainly functions as an antioxidant, the virus uses it to combat the cellular immunological responses like oxidative bursts. The viral selenoproteins may also be regulatory in nature and control HIV transcription. Preliminary studies indicate that HIV infection significantly lowers the seleno­protein level in T cells. Even though this hypothesis put forward by Will Taylor was initially for HIV, recent evidence seems to indicate that it could hold true for other retroviruses and also for other viruses, such as some strains of coxsackie viruses and even Ebola.

The viral-selenoprotein theory, though controversial, could, if proven, be a great turning point in virology. Not only would it highlight how efficient the viruses are in utilizing their genomes but it could also have a huge impact on the lives of the millions of HIV infected people all over the world. Just supplementing their diets with selenium might slow the progression to full-blown AIDS. Is this too simple to be true? The future will tell!

Chitra was a student in the 2009 Integrative Microbiology graduate course at UCSD/SDSU. She is currently pursuing her Ph.D. studies in the lab of Roland Wolkowicz at San Diego State University.