« The European Academy of Microbiology | Main | Of Terms in Biology: Sympatric & Allopatric » 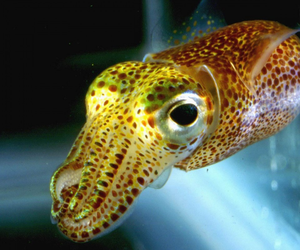 Deep within the oceans, sea animals and bioluminescent bacteria play symbiotic games. Fish, squid, and other ani­mals that bring light to the darkness use it in their quest for food, their search for mates, or the avoidance of pre­dators. This is not merely a curiosity, as seen by the sim­ple fact that most animals living 2 km or more below the ocean surface are bioluminescent. One qualification: Not all of these bioluminescent animals depend on bacteria to generate light. Most do it all by themselves.

The usual way of thinking about these host-bacteria in­ter­actions has been straighforward: the host provides a site for the bacteria, the bacteria comply by making the light that is emitted from the animal. Ac­tually, their interaction is not so simple. In the case of the well-studied Hawaiian Bobtail Squid, Euprymna scolopes, the host itself senses the light emitted by its symbionts, Vibrio fischeri – and not only with its eyes. Now, you ask, how does an animal perceive light other than by its eyes? It turns out that extra-ocular photodetectors are not uncommon among animals, this being but one example.

A recent paper from the McFall-Ngai lab sheds light (there, we said it!) on this story. First, some structure. The squid's light organ is not just a nondescript cavity where the bacteria thrive; it's a complex organ with some components analogous to the eye. Thus, it has a lens (with some of the same proteins as found in the lens of the eye), a reflective layer on the back, and even something of a "shutter" in the form of the squid's black ink sac. Next, some biochemistry. The light organ contains the visual pigment opsin and other proteins involved in optical transduction cascades. The latest news is that the light organ is itself photosensitive, with or without bacteria present. It responds electrophysiologically to light – but in a fashion distinct from that of the eye. (For those of you who speak electrophysiology: A characteristic rhabdomeric depolarization was observed in the electroretinographic spectra of the eyes, whereas the light-organ tissue responded with hyperpolarization.) 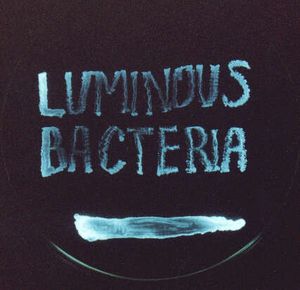 Colonies of bioluminescent bacteria pho­tographed by their own light. Source

Animals that rely on bacterial symbionts for light produc­tion must be able to regulate their light emission. Since these squids use light for counter-illumination – that is, they achieve invisibility from below by matching their own light with that coming from above – too much or too little light wouldn't work. Little is known about how this is done, although there must be significant crosstalk be­tween hosts and symbionts. For example, dark mutants of V. fisheri are rejected by juvenile squid and are not implanted in the light organ. This perception of light by the light organ may well be a mechanism for recognizing the luminescent-defective vibrios.

That the light organ of the squid has similar proteins as the eye suggests that it may be the product of evolutionary "tinkering," or "co-option," the as­sem­bly of existing components in new ways. The study of similarities and differences between the two organs promises (in the words of the authors) to provide insight both into conserved mechanisms of modulating and perceiving light and into the evolution of novelty. Well put.

Besides, these findings illuminate (there, we did it again) the intricate interactions that, given enough time, can evolve between closely-associated organisms. It makes good sense that the re­lationship would become fine-tuned, each partner sensitive to changes in the other. We've said this before, but there is something about symbioses that tickles the mind. Maybe it's because, when it comes to complex phenomena, contemplating two genomes is better than one.