« The Spider's Guide to Predator Deception | Main | Fine Reading: The Biocentric View of the Microbial World » 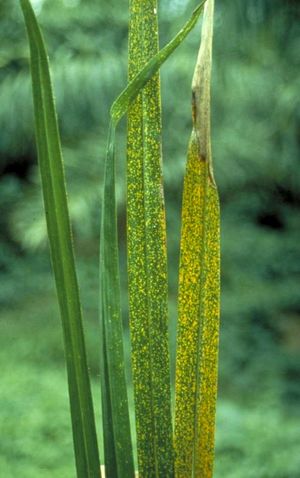 What do stunted coconut palms, misshapen potato tu­bers, and peach trees with necrotic branches have in common? They are three of the numerous crops stricken with diseases caused by viroids, an astonishing group of minimalist plant pathogens. There isn't much to a viroid, just one single-stranded, circular RNA molecule. The lar­gest viroid genome so far is 399 nucleotides, the smallest a mere 246 – about one tenth the size of the smallest vi­ruses (hepadnavirus) and one hundredth the size of more typical viruses. Being labeled as "subviral," they are even less likely than the viruses to be granted a place on the tree of life. They get by without capsid or membrane shell. They encode no proteins. They don't reverse-tran­scribe in­to DNA when they replicate. They never insert into the host genome. Some of them cause disease symp­toms, some don't. They simply replicate inside plant cells and then their progeny move on to the next location to repeat the process. Their very existence raises quest­ions, many without answers.

What does a viroid look like? Well, that depends on the viroid. The thirty-plus species known so far fall into two groups. Most belong to the Pospiviroidae (PSTVd), named after the Potato Spindle Tuber ViroiD. Four species, including the Avocado SunBlotch ViroiD, make up their own group, the Avsunvi­roi­dae (ASBVd). Although all of them lack protective capsids, they are nevertheless highly structured.

Most of their RNA genome base-pairs with complementary sequences in other parts of the same RNA molecule to form sections of double-helix. The PSTVds form rod-shaped structures, the ASBVds have more elaborate forms. (See figure.) For both groups, the bulges and loops are im­portant for survival, replication, and trafficking. (For a recent review, click here.)

How do they replicate when they encode no proteins? Viroids rely on host cell factors to help with just about everything. Once the viroid RNA enters a cell, it recruits factors for "RNA trafficking" to the compartment where it replicates; that's the nucleus for the PSTVds, the chloro­plast for the ASBVds. Then, for copying their RNA, both groups co-opt host DNA-dependent RNA polymerases, redirecting them to use the viroid RNA as template. This works, but is error-prone, giving one of the viroids the fastest known rate of mutation.

Both types replicate using a rolling circle mechanism. Although the details differ, they both pro­duce long, multimeric strands of RNA that must be cut into monomers, each monomer then li­gated to form an individual circular viroid. For the cutting ASBVds employ a do-it-yourself strategy. They dedicate 40 nucleotides of their sequence to form the smallest known naturally-occurring ribozyme. This hammerhead ribozyme catalyzes the self-cleavage needed to transform the long multimeric strands into individual genomes. After replication, the progeny RNAs use host factors to help them move to neighboring cells through the connecting plasmodesmata or to distant parts of the plant via the phloem. 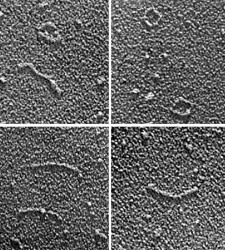 Viroids under the electron microscope. Source

Next question. How do they cause disease if they don't en­code any proteins? Directly, by RNA interference. RNAi is a mechanism that degrades double-stranded RNAs (dsRNA). In plants, this defends against RNA viruses by attacking their double-stranded replication intermedi­ates. Not only does this strategy not work against viroids, but it actually causes the symptoms associated with viroid infection. How does this happen? Short lengths of RNA clipped from the viroid genome can base pair with complementary host mRNA to form dsRNAs that are then degraded. Destroying the mRNAs effectively turns off the corresponding genes in the host. You might wonder why host-derived RNAi doesn't degrade the double-stranded viroids. This is likely due to the viroid's complex secondary structure and to the fact that all of their double-stranded regions are too short to activate RNAi.

Where did viroids come from? Viroids show no relationship to viruses, but there is some evidence – all seemingly a bit of a stretch – suggesting evolutionary links to transposable elements, or may­be to mitochondrial plasmids, or even to self-splicing introns. Take your pick. All viroids form a monophyletic group along with the satellite RNAs also found in plants. Are they ancient? Those who picture early life on the planet as based on RNA, not DNA, would like to think so.

If viroids are ancient, or even just a century old, why the sudden appearance of viroid diseases in our crops in recent decades? At least some viroids were accidentally introduced by humans from wild relatives where often their infections are asymptomatic. We become aware of them in our crops when they cause disease. Once introduced, we have insured that they spread. They used to have to rely primarily on direct transmission to the next generation via seed or pollen. Some were occasionally carried from one host to the next by chewing insects. Nowadays, our practice of mono-cropping makes inadvertent transmission by insects far more likely. Better yet, most often we transport the viroids ourselves, introducing them directly into their next host as we prune or graft.

Why are there no viroids that infect animals? Maybe even bacteria? Not a clue.

Ancient or not, viroids are today expanding their horizons through global commerce, meeting new hosts through modern agriculture. Life is good for viroids today – if indeed it would occur to any­one to describe viroids as alive.