« Of Terms in Biology: Sympatric & Allopatric | Main | Biology By the Numbers »

The Genes, The Whole Genes, & Nothing But The Genes 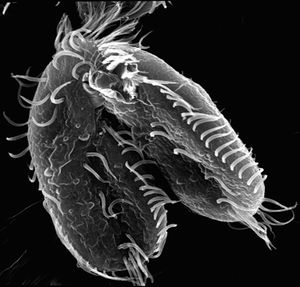 SEM of Oxytricha in the process of re­pro­ducing. Source

We have come to expect the unexpected of ciliates, and Oxytricha trifallax, with its genomic capers, does not dis­appoint. Like many of its more famous ciliate relatives (e.g., paramecium, tetrahymena, stentor), Oxytricha is a complex unicellular organism with many specialized cel­lular structures. Of course, they have the requisite cilia for locomotion, feeding, and sensing their environment. But they also have a "mouth," food vacuoles where di­gestion takes place, kidney-like contractile vacuoles for osmoregulation, and a pseudo-anus – the cytoproct. Not surprisingly, ciliates tend to be large cells, some mea­su­red in millimeters. Combined with a fast rate of growth, this may require more gene transcription than a diploid genome can support. To cope with this demand, ciliates employ a convoluted strategy, one unique so far to this group.

Ciliates have two types of nuclei in each cell, micronuclei (Mics) and macronuclei (Macs), each of which performs different functions. Mics are small, but contain the entire genome and pass it on to the next generation; Macs are huge and contain only a subset of the genome, duplicated many times. That subset is sufficient to support vegetative growth. The number of these nuclei varies among the ciliates; Oxytricha has two identical Mics plus two to four Macs. During conjugation, one of the Mics undergoes meiosis and fertilization (see Figure to the right). Afterwards, the old Macs are discarded and a Mic gives rise to the new Macs. To create a new Mac, the Mic performs an intricate – one could say mind-boggling – spectacle of DNA differentiation. 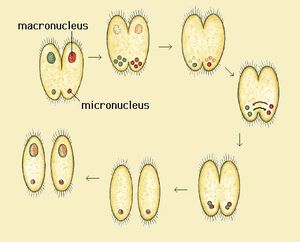 The 'Mic-Mac' cycle in ciliates. Source

Oxytricha's germline genome housed in the Mic is a hefty 1 Gb. Of that total, only 5% is used to encode its 30,000 genes; the other 95% is "junk" DNA including transpo­sons and other non-coding sequences. The Mac, in con­trast, contains only the coding 5%. The other 95% of the genome is eliminated when a Mic differentiates into a Mac. But the process is even more complex because in the Mic many of those 30,000 genes are broken into many segments each – sometimes more than 40 from one gene. The segments are separated by regions of non-coding DNA. They aren't even arranged in the right order along the chromosome, and some of them are aligned in the wrong orientation. In that disrupted form, they could not be transcribed. But no big deal, because gene transcription is the work of the Mac. However, this does mean that when a Mic is transformed into a Mac, those genes have to be put together from the fragments; the segments must be joined together in the correct sequence and orientation to recreate the complete coding sequence for each gene. 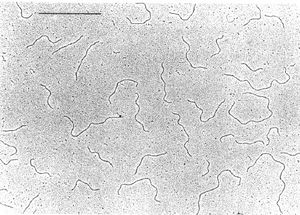 Stranger still, in the Mac the genes are not on long chro­mosomes, but are distributed among 25,000 distinct minichromosomes, mostly just one gene each (plus telomeres). Each minichromosome is then amplified a thousand-fold making for 25 million minichromosomes in each Mac. That's a lot of chromosomes to partition to the daughter Macs formed each time the cells divide. Although the Mic undergoes mitosis, thus precisely distributing one copy of each chromosome to each daughter cell, the Mac just divvies up the millions of minichromosomes by a somewhat sloppy but unknown mechanism.

When thinking about how the Mic differentiates into a Mac, two questions pop up immediately. How are the cuts made in the Mic genome? How is the useful 5% separated from the junk 95% and the gene segments then correctly joined together into functional genes? Two papers from Nowacki and colleagues give us some hints.

Now let's jump to the other question: how are the gene segments assembled into mini-chromo­somes in the correct sequence? In an earlier paper, the authors hypothesized that Oxytricha might make a single-stranded RNA copy of each minichromosome before the old Mac is degraded. One could imagine a mechanism whereby these RNA copies could serve as a template. Gene segments could base-pair with the complementary region of the template and then be joined together. When they went looking, these researchers found that such RNAs do exist and, tellingly, only du­ring the hours when the DNA is being processed for the new Mac. If these RNAs are indeed guid­ing the correct assembly of fragmented genes, then introducing RNA for such a gene with the segments arranged in a different order should result in minichromosomes that matched the in­jected RNA. They did this experiment, synthesizing the RNAs in the lab and microinjecting them into the Oxytricha. The genes in the progeny Macs had been assembled in the manner specified by the injected RNA, thus confirming a template role for the RNA.

In every organism, DNA serves as both the information archive to be passed on to succeeding generations and as the template for RNA transcription. Leave it to the ciliates to handle this in their own way – using two different genomes located in two different nuclei. The choreography is intricate, but nevertheless it all seems to work.