The Spider's Guide to Predator Deception 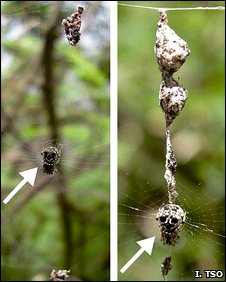 We sometimes make a sally into the high jinks of meta­zoans, perhaps to persuade you that we are not pro­kar­yotic chauvinists (not that you thought so, surely). This foray concerns a novel strategy that sheds light on an apparent paradox: many prey, instead of making them­selves hard to see, seem to use tactics that make them easy for the predators to spot. To wit, certain fish, am­phibians, reptiles, and insects are strikingly colored or are otherwise conspicuous, which poses a Darwinian paradox. The way out? Lure the predator into attacking a decoy! Here is a story of spiders that make spider decoys. And the decoys work.

A spider called Cyclosa mulmeinensis uses egg sacs and the leftover carcasses of its prey to make constructs that resemble its own body. These structures are strung along one of the guy wires of the web, which has earned this species the label Trash Line Spiders. Spider experts Ling Tseng and I-Min Tso of Tunghai University in Taiwan ob­served that parasitic wasps attacked the decoys more often than the spiders. The authors quant­itated the cost and benefits of this behavior and concluded that "this conspicuous antipredator display would enhance overall survival and was adaptive for this vulnerable prey." Thus, this stra­tegy of fooling the predator rather than hiding from it seems to work. It may explain in part why so many spiders decorate their webs, something that has baffled arachnidologists for a long time. Sometimes in-your-face strategies work pretty well.