A Thing of Beauty

This is the second post for this year's Week of the Fungi on STC, a sporadic undertaking. This annual festival is our way to hail the start of the fall mushroom collecting season in parts of our home territory (the northern hemisphere). 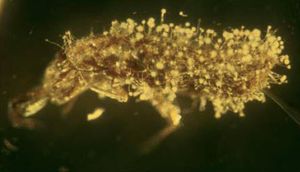 A thing of beauty is a joy for ever:
Its loveliness increases; it will never
Pass into nothingness…
from Endymion, by John Keats (1878)

We can attest to these truths through a lone piece of amber. Between 50 and 35 million years ago, a springtail (Collembola) got stuck in some resin, probably from a conifer. Before it could free it­self, more resin dripped on it, eventually entombing it completely. In time, the resin became am­ber, but before that happened, a fungus grew on the insect's cadaver, sprouting numerous spore-bearing structures (conidiophores). Fortunately, this piece of amber found its way to two paleomy­cologists, Heinrich Dörfelt and Alexander Schmidt, who readily identified the fungus as a member of the genus Aspergillus. 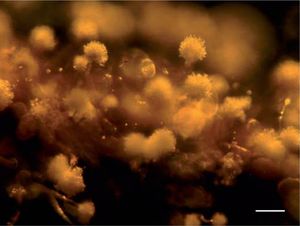 Amber has served up other fascinating glimpses of an­cient fungi, including the oldest known fossil mushroom entrapped 100 million years ago. However, the preser­vation of these conidiophores is stunning, probably un­matched by any other piece of amber containing fungal material. The likely reason is that the fungus did indeed sprout these structures after the insect’s burial in the thick-but-still-liquid resin. Otherwise, little would have been preserved of its natural shape.

An especially illuminating article on the same subject by Cornell student Christine Layton appeared in the famed Cornell Mushroom Blog.