Fluorescence microscopy of bacteria has long been a challenge due to the size of the organisms and the diffraction limit of visible-light microscopy. Although much valuable data has been col­lected by refining optical systems, automating microscopy setups, and using deconvolution algo­rithms, localization of single molecules inside cells has rarely been possible. With the advent of PALM and STORM microscopy, however, single-molecule resolution inside live cells has the po­tential to become routine!

In principle, a point of light, as emitted by a single fluorescent molecule, should define its location. However, if there are several close light emitters, the optical microscope cannot resolve them and sees them as one. This is due to diffraction of light and the fact that microscopes can only 'see' a portion of the radiated light through the lens. (To learn more about this point spread function, click here.) Several methods have been developed to get around this problem, generating a whole alphabet soup of abbreviations: SIM, SSIM, STED, and others. The two that may gain great accep­tance are PALM (PhotoActivation Localization Microscopy) and STORM (STochastic Optical Recon­struction Microscopy).

These super-resolution, light microscopy techniques can provide information below the limit of resolution determined by the Rayleigh criterion (about 200 nanometers in near-ultraviolet light). Both systems achieve this resolution by sequentially and randomly turning on and off a small number of fluorescent molecules. This way, two adjacent molecules are unlikely to turn on at the same time. The molecules used must be capable of photoswitching, meaning that after being activated by light of one wavelength, they can then be excited by a different wavelength and their resulting fluorescence detected. Also, excitation must irreversibly photobleach them so that they can be activated/excited only once. By hitting a sample with a very small dose of activation light, only a small number of fluorophores will become activated. The sample is imaged by hitting it with excitation light, which also bleaches the activated/excited fluorophores. This process is then re­peated many times until all the fluorescent molecules have been imaged and bleached. A computer algorithm reconstructs the series of indivi­du­al images into a composite that theoretically repre­sents every fluorescently-tagged molecule within the cell. A key feature of these techniques is the low dose of activation energy. Because only one tagged molecule is activated within a relatively large area, this greatly reduces the pos­sibility that one light source (fluorophore) masks another. In this way, single molecule (super) resolution can be achieved. Proteins can be counted and localized directly. The PALM/STORM techniques are nicely reviewed by Hen­­riques and Mhlanga.

Recently, Greenfield et al. were the first to apply super-resolution PALM microscopy to a bacterium. The group labeled, counted, and localized components of the E. coli chemotaxis system to examine the dynamics of chemo­taxis receptor clustering and localization. Both Tar, a transmembrane receptor that accounts for ~40% of all receptors inside the cell, and CheW, a response regulator that binds to all types of E. coli chemotaxis receptors, were fused with photoswitchable fluorescent proteins and imaged. Importantly, essentially the same locali­za­tion pattern was obtained from each of the two fusion proteins: some single molecules, some small clusters of 10–1000 proteins, and one or two large clusters (>1000 molecules) localized at the cell poles. The large clusters, but not the smaller ones, had also been previously seen using standard fluorescence microscopy and electron microscopy.

With the higher resolution afforded by PALM, the new data about small clusters and their sub­cel­lular location allowed the authors to directly test previously proposed models about how the che­motaxis receptor arrays localize to the poles. Specifically, they were able to address the question of whether or not an anchor is required for polar localization. Using computational modeling to accurately describe their experimental results, they provide direct evidence for a stochastic self-assembly mechanism for polar localization. No anchor required!

As this first published report of the application of PALM to bacteria demonstrates, the potential of PALM is hugely exciting! Imagine being able to see monomers of your favorite protein on their way to a specific subcellular address. How do they get there? Is the mechanism similar to the stochas­tic aggregation seen here? Now that we can see below the diffraction limit, we can ask if they are really co-localizing with their 'partner'. So many questions …and I can't wait to learn the answers! 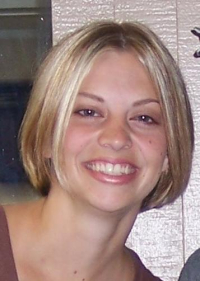 Jennifer is a microbiology graduate student in the Joint Doctoral Program of San Diego State University and University of California at San Diego. She works in Kit Pogliano's lab.