Fungal Stars in the Forest Dark

This is the third post for this year's Week of the Fungi on STC, a sporadic undertaking. This annual festival is our way to hail the start of the fall mushroom collecting season in parts of our home territory (the northern hemisphere). 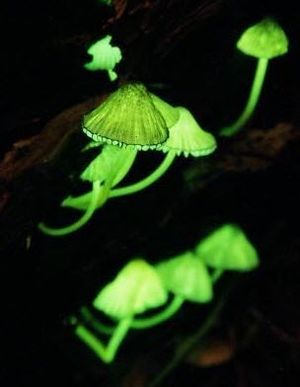 Mycena luxcoeli, a Japanese fungus, pho­tographed by its own light. Source

Fungi, along with selected bacteria and invertebrates, are included in the list of bioluminescent organisms. These fungi are pretty unique because, unlike the other light-emitting organisms, fungi don't walk, swim, or fly. Thus, the usual explanations for bioluminescence (e.g., at­trac­tion, repulsion, communication) do not seem to apply. Dispersing spores is a central preoccupation among mushrooms, so one can guess that the light may facili­tate visits by animals that could help in this process. Plus, as Dennis Desjardin writes in a news item from the NSF, some may well glow to attract the predators of insects that eat the mushrooms...befriend the enemy of your enemy!

So far, only 65 of the 85,000 species of fungi are known to glow. Looking for new bioluminescent species is some­thing one does under the cloak of darkness and, in Des­jardin's case, in deep Brazilian jungles. Just how you avoid getting bitten by who knows who, and, more importantly, how you keep from getting lost, is something that you need to read for yourself in this article. While you are worrying about that, ponder these other questions posed by the author: Why are there so few luminescent fungi? What is the mechanism of luminescence? When and how many times did luminescence evolve in the fungi? Why do they glow?” 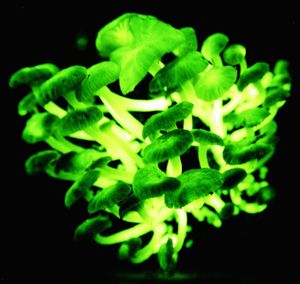 Mycena lucentipes, a Brazilian mush­room photographed by its own light. Source