« Fine Reading: The Good-Enough Clockus of Prochlorococcus | Main | The Three Stages of My Experience in Discovering the Mode of Action of Penicillin » 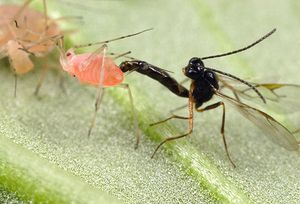 The Good Guy. Aphidius wasps are com­mon­ly used for for biocontrol of aphids. Here, a female wasp hits her mark. Source

Because it prefers to dine on some of our valued crop plants, the pea aphid (Acyrthosiphon pisum) is consider­ed a major pest – thus a Bad Guy from our perspective. Pea aphids are not without their enemies. Enemy num­ber one is a parasitoid wasp, Aphidius ervi. As parasitoid wasps are used to do, females provide for their offspring by depositing their eggs in the haemocoel of another in­sect, in this case a pea aphid. The wasp larva feeds and develops there for about a week, eventually killing the host. When the host viscera have been consumed, the larva causes the aphid's cuticle to harden and dry. Soon, an adult wasp emerges from the aphid "mummy." Agri­culturally speaking, parasitoid wasps are Good Guys, im­portant partners in our integrated pest management strategies. You can buy wasp eggs for your fields by the hundreds or thousands online.

Early on it was noticed that aphid (A. pisum) clones vary greatly in their resistance to the wasps. In some, the development of the wasp larva is arrested and the host survives. Because the pea aphid was known to harbor Buchnera aphidicola as a primary endosymbiont and also as many as five other bacteria as secondary endosymbionts, it was suspected that this variation in resistance might be due to which endosymbionts are on board. (What makes a symbiont a primary rather than a secondary symbiont? That depends on who you ask. Some distinguish based on the evolu­tionary age of the symbiosis, others mention the obligate nature of the relationship for both part­ners.) 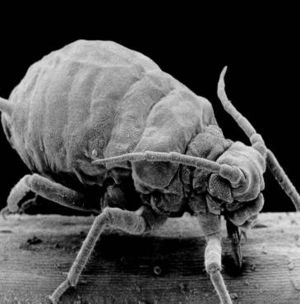 The Bad Guy. SEM of an aphid, sure to have Buchnera on board. Source

The nutritional role of the Buchnera endosymbionts is well known. Aphids feed on phloem – a high sugar, low amino acid plant sap. The Buchnera genome encodes the genes required to make all the essential amino acids needed by the aphids. The Buchnera live within specia­lized aphid cells (called bacteriocytes) along with a vari­able number of secondary symbionts. The secondary symbionts characterized so far include three γ-proteo­bac­teria, a Rickettsia, and a Spiroplasma. In order for these maternally-inherited symbionts to persist or spread in aphid populations, they must confer some benefit, at least under some conditions. Of the three γ-proteobacteria, the presence of one (Regiella insec­ti­cola) improves the survival rate of pea aphids infected by a major aphid fungal pathogen (the Entomophthorales fungus Erynia neoaphidis). For the other two (Hamiltonella defensa and Serratia symbiotica), the presence of either one confers some resistance to the parasitoid wasp – thus making them Bad Guys on the side of the aphid.

We now know quite a bit more about H. defensa, thanks to work carried out in Nancy Moran's lab. Some insights came from their recent sequencing of its complete genome. At 2.1 Mb, H. defensa has undergone significant genome reduction compared to its free-living close relatives such as Yersinia and Serratia with their 4.6 – 5.4 Mb genomes. On the other hand, it has suffered far less gene loss than Buchnera, whose genome is a mere 640 Kb. However, H. defensa lacks the genes needed to synthesize eight essential amino acids. For those, it relies – like its aphid host – on syn­thesis by Buchnera. What H. defensa does contribute is defense against the wasp. It earns its keep when parasitoids are present but otherwise carries a fitness cost. As the result, H. defensa occurs only sporadically in these aphids, its infection frequency fluctuating in concert with parasitoid pressure. 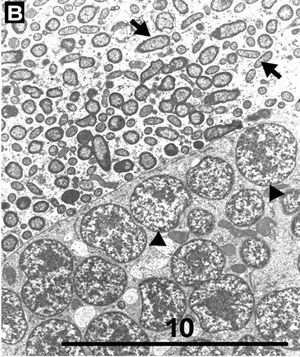 The story becomes even more complex because not all strains of H. defensa are defenders. Those effective in blocking development of the wasp larvae carry a λ-like phage known as APSE. (The source of this acronym? A. pisum secondary endosymbiont.) Even among the phage-carrying H. defensa, some are better defenders than others, likely due to differences between their phage. All of the ASPE phage studied so far have been found to have 95% or more sequence identity and to encode some nasty toxins. Some of their toxin genes are homologous to those found in well-known mammalian pathogens, e.g., genes for Shiga and Campylobacter jejuni toxins. The particular toxin-encoding genes present differ from one phage strain to another, likely accounting for the variable effectiveness of their H. defensa hosts.

That H. defensa's defense of its aphid host requires the ASPE phage does not mean that H. defensa doesn't play a part – only that it can't do it alone. H. defensa comes from a line of pathogens and has retained abundant weaponry, including type-III secretion systems, putative toxin genes, and related regulatory factors. Nevertheless, it seems clear that the phage is an essential partner. To quote the investigators:"...the evolutionary interests of phages, bacterial symbionts, and aphids are all aligned against the parasitoid wasp that threatens them all."

But the wasp, too, is an essential partner, bringing the count of participants so far up to five: wasp, aphid, Buchnera, H. defensa, and ASPE phage. Without the wasp, H. defensa would disappear from the aphid population like so much excess baggage. Without H. defensa and its phage, the aphids would be more vulnerable to the wasps. Without Buchnera, the aphids would starve and the wasp would have to look for some other host to nourish its young. In this pentangle, there are neither Good Guys or Bad Guys, only an interwoven ménage à cinq.