This is the fourth (and final) post for this year's Week of the Fungi on STC, a sporadic undertaking. This annual festival is our way to hail the start of the fall mushroom collecting season in parts of our home territory (the northern hemisphere). 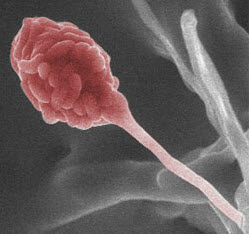 Huge amounts of money and effort are going into mak­ing automotive fuels using biological processes, but a fully satisfactory answer is not yet at hand. Well, fungi may come to the rescue. Strobel et al. found that a fun­gus called Gliocladium roseum actually makes a complex mixture of volatile hydrocarbons and derivatives that resemble those found in diesel fuels. Not only that, this fungus decomposes cellulose without needing any help. It sounds just right, but before you talk to your broker about your Exxon Mobile stock, read on.

This fungus, a somewhat atypical member of its species, was found in a Northern Patagonian rainforest living as an endophyte of the tree Eucryphia cordifolia. Now, what are endophytic fungi? They are benign inhabitants of healthy plants and are quite common. Endophytic fungi are adroit chemists and make a large number of bioactive secondary metabolites. The most famous among these is the anticancer drug taxol, which is widely used in treatment. Incidentally, taxol can be isolated from both the plant and its fungi, suggesting the horizontal transfer of genes between them. 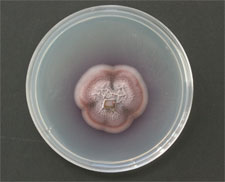 The problem with turning G. roseum into a fuel machine is that it grows slowly and its rate of production is far from overwhelming. However, who is to say that further work on this and other strains may not lead to significant improvements in production.

There may even be more to the story, as fungi may have participated in making petroleum and its products. To let the authors explain:"In view of this work, perhaps it is not unreasonable to speculate that some hydrocarbons in the earth’s upper mantle may have arisen via the fermen­ta­tion of plant material by fungi under conditions of li­mited oxygen. The endophytic microbes may be the first ones involved in the disintegration and utilization of plant material since, by definition, they are located in the plant tissues at the time of the demise of the plant."

How did these investigators come upon this unusual finding? What were they looking for? You may well find out by listening to a podcast in which Dr. Strobel talks about that.

When Strobel's paper was published last year, it was enthusiastically touted as reassurance that biofuel solutions are on the near horizon that will seemlessly replace fossil fuels and related pe­trochemicals. (Google "mycodiesel" and pick from the ~40,000 hits.) "Fill 'er up with mycodiesel" was the cry. While undoubtedly many biofuel options will prove useful at some scales, in some locales, at some point in time, significant issues arise when contemplating meeting the world's current energy needs in this fashion.

Let's assume for the sake of argument that, indeed, Strobel or others can grab the genes encoding the mycodiesel metabolic pathway, engineer them into a tractable microbe, and set up large-scale production. Among the many points that could be questioned, I'll focus on just one: the carbon input required. Strobel has a ready answer: the fungus can use cellulose. "That's the most com­mon organic molecule on earth," he said. "It's all around us, everywhere."

Input could be grown as crops, which would potentially impact food supplies and costs, and could also increase greenhouse gas emissions. Or we could use agricultural or logging "wastes," thus ac­celerating the mining of our soils leading to further reductions in productivity. Again, it is a matter of scale.

To put this in perspective, consider how much of the photosynthetic output of terrestial ecosys­tems we already are using ­– in addition to our consumption of prior primary production in the form of fossil fuels. Currently, best estimates of HANPP (human appropriation of net primary production) stand a bit above 20%, with some oft-quoted values reaching as high as 40%. "People use this material directly or indirectly, it flows to different consumers and decomposers than it otherwise would, or it is lost because of human-caused changes in land use." (Source) "This is a remarkable level of co-option for a species that represents roughly 0.5% of the total heterotroph biomass on Earth."

The take home lesson here, stated in the most restrained and diplomatic of terms by Haberl: "An obvious implication of HANPP is that growth in the amount of biomass used by humans for their socio-economic metabolism must be envisaged with caution."