« The Three Stages of My Experience in Discovering the Mode of Action of Penicillin | Main | Of Terms in Biology: Planktonic »

In recent years, the use of radioactive isotopes has diminished considerably in microbiological re­search. What has been lost in the process? 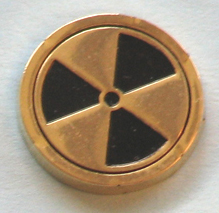 This is a nostalgia trip. Molecular microbiologists of my generation re­lied on the use of radioactive isotopes for much of their research. In those days, the size of a de­partment's research effort could be mea­sured by the number of scintillation counters it had at its disposal. Ra­dioactivity was a convenient way of detecting and quan­titating very small amounts of cell constituents. This has now been superseded by fluorescence and other non-radioactive methods. However, there are some things that radioactive isotopes do best. Thus, they are still in use. Here are two such uses.

These days, when I mention radioactive isotopes, the response I get tends to focus on the dangers of working with them. Well, in the past we were not only careful but also aware of what constitutes danger. Mostly, we worked under safe conditions. Or so we thought. And I'm still around, many millicuries of 32P later.