Fiddling with Fungi: And the Winner Is… Late in August of 2008 we promised to update you on the attempts to out-Stradivarius Stradivarius by crafting vio­lins made from wood treated with fungi. Here is the lat­est news.

Scientists at the Swiss Federal Laboratories for Materials Testing and Research made violins from wood treated with two different fungi: Physisporinus vitreus for the spruce top plate and Xylaria longipes (aka Dead Man's Fingers) for the sycamore bottom plate. The treatment lasted six or nine months, by which time the wood had become covered with a fuzzy growth of mycelium.

They made four violins from the same wood: one treated for six months, another for nine months, and two untreated. The British violinist Matthew Trusler played all four for an audience of more than 180 people at a forestry conference. More than 90 people ranked the bioviolin treated for nine months ahead of a real Stradivarius, which came in second, followed by the violin treated for six months. The two untreated violins came in last. 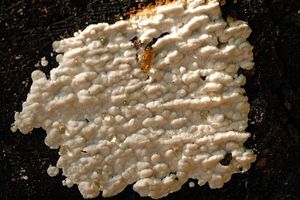 The idea here was that treating the wood with fungi might artificially recreate the structure of the wood found naturally during Stradivarius's lifetime. The Little Ice Age, a period of abnormally cool weather between 1645 and 1715, produced trees with more uniform wood. Treating today's wood with the fungi artificially results in wood with similar properties.

When these modern Stradivarius soundalikes become commercially available, musicians will be able to have the sound of a Stradivarius without the price – for a mere $25,000.