Getting a Handle on Cell Organization

Structural organization is one of the most conspicuous features of cells, and possibly the most elusive. No one really doubts that that cell functions commonly require that the right molecules be in the right place at the right time; or that spatial organization is what distinguishes a living cell from a soup of its molecular constituents. But the tradition that has dominated biological research for the past century mandates a focus on the molecules, and so our first step is commonly to grind the exquisite architecture of the living cell into a pulp. Few molecular scientists have asked whether anything irretrievable is lost by this brutal routine. Such questions as how molecules find their proper place in a framework orders of magnitude larger, or how spatial order is transmitted from one generation to the next, have been largely neglected until recently. 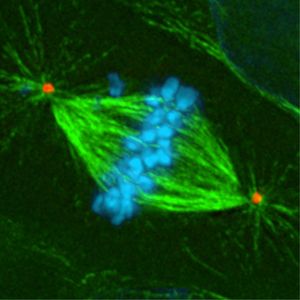 Mitotic spindle of a human cell: mi­cro­tubules in green, chromosomes in blue, centrosomes in red. Source

Two current and quite excellent short reviews afford an entry into the wilderness. Eric Karsenti takes an historical approach to the role of self-organization in creating or­der on the cellular scale. The physical principles are ar­cane, but some aspects are actually quite familiar. We have known for half a century that supra-molecular com­plexes often arise by self-assembly, without any input of either information or energy; examples include lipid bi­layer membranes, ribosomes, microtubules, S-layers and virus particles. But the scope of self-organization has been greatly enlarged in recent years by the discovery that an array of dynamic structures can be generated in the presence of an energy source, usually ATP or GTP. The mitotic spindle of eukaryotes has been identified as a self-organizing machine, the endomembrane system may be another. Like self-assembly, self-construction (my term) requires no external source of information, but it does entail continual energy consumption. In a complementary article, Allen Liu and Daniel Fletcher survey a selection of efforts to reconsti­tute cellular functions in simplified systems, starting with cell-free extracts or purified proteins. In­genious experimenters have managed to reconstitute the essentials of actin-based motility, mem­brane protrusion, the oscillatory system that localizes the midpoint of bacterial cells, and now also the contraction of the Z-ring. Though much remains to be learned, it is safe to conclude that the lower levels of cellular order, at least, are products of pure chemistry: they arise by interactions among the molecular constituents in ways that require the cell as a whole to supply energy and a permissive environment, but no spatial instructions.

This is excellent science, which takes us some way towards bridging the gulf between nanometer-sized molecules and cells in the range from micrometers to millimeters. It also extends the geno­me's reach deep into cellular structure. In a self-organizing system, the "instructions" must be wholly inherent in the molecular parts, and ultimately derive from the corresponding genes. It is the genome that specifies the architecture of the mitotic spindle, not explicitly but indirectly: the form and even functions of the spindle are implied in the structure of the spindle proteins, and in their interactions. And if the spindle can be envisaged as a creature of self-organization, why not the entire cell? Yes, indeed – but as we ascend the hierarchy of biological organization, the mean­ing assigned to self-organization and its underlying mechanisms undergo significant changes. Cells do not construct themselves from pre-fabricated standard parts; instead, they grow. And that mode of self-organization is not purely chemical, for it must produce parts that have biolo­gical functions, performed in the service of a larger entity that can compete and thrive in the wide world (discussed here).

We are quite well informed about just how cells grow, and it is clear now that they do so by mo­deling themselves upon the existing structural framework, which is thereby transmitted to the next generation. To be sure, all the macromolecules involved in this sort of self-organization are gene-specified, but spatial order is not. There appear to be very few individual genes that pre­scribe dimensions, position or orientation on the cellular scale. Instead, thanks to the ways in which cells grow, spatial cues are sometimes inherited in a manner quite independent of genes (a well-established phenomenon known as "structural inheritance"; discussed here). The form and organization of cells thus stem from two distinct informational roots: the genomic instructions that specify the parts, and the continuity of cellular architecture that guides their placement. Spe­cified proteins and cellular guidelines operate synergistically, reinforcing each other to generate form and organization. As Rudolf Virchow might have said, it takes a cell to make a cell.

Evidence to support such a holistic view of what happens during growth is scattered, but contin­ues to accumulate. Let's glance at some examples. First, while many sub-cellular structures can be envisaged as products of self-construction from preformed parts, others cannot. A familiar in­stance is the peptidoglycan wall of bacteria, which consists of a network as large as the cell, made up of covalently-linked subunits. Enlargement during growth calls for extensive cutting, splicing and cross-linking, even while keeping the wall physically continuous from one generation to the next. Second, even self-organizing structures must do so in a manner that ensures their correct placement in cellular space. A particularly neat example comes from recent work on the role of microtubules in cell morphogenesis of fission yeast, Schizosaccharomyces pombe (reviewed by Martin). Microtubules define the poles of elongating cells by depositing there various members of the Tea complex, which in turn recruit additional factors. Cells of a certain mutant, orb6, grow as spheres even though they possess all this machinery. When, however, the mutant cells are grown in microfluidic channels that force them back into the cylindrical shape, the normal longitudinal orientation of the microtubules recovers, and so does deposition of polarity factors at the poles (Terenna et al.). Clearly, the microtubule system and cell form collaborate to organize the cell. Just how this comes about is uncertain, but we can borrow a clue from another admirable study, this one in Bacillus subtilis. Ramamurthi et al. found that the peripheral membrane protein SpoVM localizes to a particular patch of membrane during sporulation by recognizing its curvature; per­haps microtubule ends do likewise.

All this makes good sense, at least to me, but it reopens the question how, and indeed whether, the genome specifies cell morphology and organization. The classical conception, which has been articulated by such luminaries as August Weismann, François Jacob and Richard Dawkins, sees the cell as a creature of its genes, and its form and functions as little more than epiphenomena. In the past, this gene-centered view of life has rested on extrapolation more than direct evidence, but confirmation has recently come by way of a remarkable paper from Craig Venter's laboratory. Lar­tigue et al. described the transplantation of the entire, naked genome from one species of Myco­plasma to another, tuning the recipient into the donor by both genetic and phenotypic criteria. I hasten to add that the rate of success was vanishingly small, one cell transformed out of 150,000; that no one yet knows just what transpires during genome transplantation; and that it remains to be seen whether it can span genera as well as species. All the same, this is surely a landmark stu­dy. If one takes its conclusions literally (which the authors were careful not to do), one must infer that a cell represents the execution of the instructions spelled in its genes, and nothing more.

On the face of it, there seems to be a glaring conflict between the geneticist's understanding of cell organization, and the physiologist's. The former insists that form and organization obey the genome's writ. The latter sees the genome as a key subroutine within the larger program of the cell; and it is the cell, not its genome, that grows, reproduces and organizes itself. They can't both be true – or can they? Note that reproduction and heredity operate on different timescales. A growing cell relies on self-organization to transmit much of its spatial order, by mechanisms quite independent of the genetic instructions. But the genes specify the parts, and mutations commonly affect the higher levels of order; on the evolutionary timescale, it will be the genes that chiefly shape cells. Having said this, there remains a long stretch between the straightforward specifi­ca­tion of an amino acid sequence by its corresponding sequence of nucleotides, and the devious and cryptic manner in which the genome can be said to specify the whole cell. Intellectual subtle­ties must not obscure the conceptual shift, from a linear chain of command to a branched and braided loop of causes and effects reverberating in a self-organizing web. The only agent capable of interpreting the E. coli genome as "a short rod with hemispherical caps" is the cell itself.

There is a whiff of vitalism about this view of life, even a hint of heresy. Stop now and take a deep breath; for once you begin to wonder where all this organization came from in the first place, you are headed for the blue water.