« All for One, and One for All! | Main | Getting a Handle on Cell Organization » 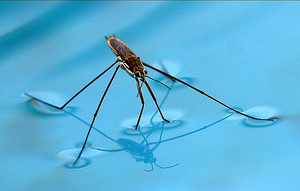 A water strider. Surely handsome, albeit not microbial. Source

When I stumbled across the term bacterioneuston, I dis­covered a whole new world where the air meets the sea. I found that marine neuston had long been used to refer to the diverse flora and fauna inhabiting the topmost 5 cm of the oceans – a distinctly different assemblage than found in the waters below. This broad grouping had been further subdivided. Floating organisms, such as Physalia, the Portuguese Man o' War, make up the pleuston (the small organisms floating on or near the surface of a body of water, from the Greek pleustikos, fit for sailing). The 40-some species of water striders are part of the epi­neu­ston (the organisms living in the air on the surface film of a body of water). Just beneath them, liv­ing immediately below the surface film, are the organisms of the hyponeuston. There are no hard and fast lines here. A diving epineustonic water strider finds itself briefly a hyponeu­ston. The planktohyponeuston gather near the surface at night but spend their days below. And, of course, the plankton float or drift throughout the rest of the water column. (For these neustonic terms and more, click here.)

Notice how those definitions shifted from the topmost 5 cm to the surface microlayer film as our focus of interest shifted. Today, unadorned neuston is often used to mean the organisms in the surface film. Its etymology? From the Greek neustos swimming, from nein to swim.

The presence of a gelatinous surface microlayer film had been proposed in 1983, based partly on observations of the slick associated with blooms in the Sargasso Sea of the filamentous cyanobac­terium Trichodesmium. (It struck me that the surface microlayer might be a most desirable loca­tion for a filamentous, nitrogen-fixing, photosynthetic cyanobacterium.)

What about the ocean surface film from the microbial neustonian point of view? It might appear to be an immense biofilm stretching from horizon to horizon. Thickness? The authors of one paper wryly note: In most investigations, the surface microlayer is operationally defined based on the depth of the sample layer collected, which is in turn dependent on the sampling method em­ployed. Estimates of its thickness range from 1 to 50 µm, with some of the difference likely due to the variable layers of bacteria present. Surface layer bacterial concentrations are commonly said to be 103−105 times higher than in the underlying water column. One study of the North Sea found that the surface layer microbes were predominantly from two genera, Vibrio and Pseudoal­teromonas, both of which have characteristics suggestive of adaptation to life in biofilms.

Oh, what about the bacterioneuston, where this article began? This is – of course – the bacterial component of the neuston. So far Google finds no mention of an archaeaneuston. The poor Ar­chaea, ignored and neglected yet once again.