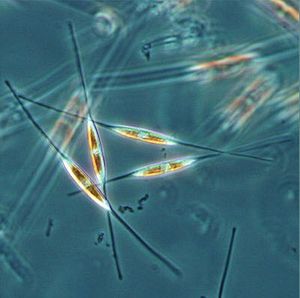 The word planktonic is widely used in microbiology for or­ganisms that are floating in bodies of water. It may be worthwhile to ponder its meaning. According to Wiki­pe­dia:"plankton consist of any drifting organisms (animals, plants, archaea, or bacteria) that inhabit the pelagic zone of oceans, seas, or bodies of fresh water." So, what does pelagic mean? Wiktionary says:"Living in the open sea rather than in coastal or inland waters." Clearly, micro­biologists use the term planktonic without the "pelagic" restriction, and include any body of water, even that in a test tube. The word plankton is derived from the Greek word πλαγκτος ("planktos"), meaning wanderer or drifter (thus also related to planet).

What is the antonym of planktonic? Sessile comes to mind (i.e., permanently attached or estab­lished, not free to move about). Its etymology? From the Latin sessilis, from sessus, past participle of sedēre, to sit. But attached or clinging would do as well. Not relevant here but of linguistic in­terest, the antonym of sessile is vagile, having freedom to move about. I had never heard of it. I stopped being vagile years ago.

If sessile does not appeal to you, perhaps adhering would do. Or maybe we should invent a new term. How about biofilmic or biofilmatic? Want to vote it in or out? Let us know.

Editor's note: The image of a diatom chain previously displayed here was used without permission of the photographer and has been removed. If any blog visitors have downloaded that image, they should be aware that it is under copyright and that permission and payment of a fee is required for its use. Our apologies to the photographer.