This article first appeared in the splendid Cornell Mushroom Blog. Reading it, we were jolted into realizing that we had a distorted view of the living world, no less. Like most people, we believed that in natural ha­bitats, some animals eat plants, those animals are eaten by predators, and that's about it. We thank Bob Mesibov for setting us straight. We are delighted to share his insights with you by reproducing his article here, with permission from him and from Kathie Hodge, editor and blogificator of the Cornell Mushroom Blog. 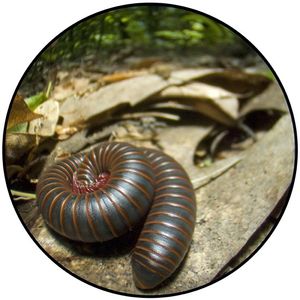 The millipede Narceus americanus pho­to­graphed by Kent Loeffler, copyright Cor­nell University. You can find this bore­scopic image among the many in the book Beneath Notice: Adventures with a Borescope by Kent Loeffler, with "Fungal Outbursts" by Kathie Hodges.

If you studied the traditional sort of biology, you're pro­bably carrying around an unfortunate prejudice.

You see terrestrial habitats as a simplified nutrients-and-energy pyramid. At the bottom are green plants, feeding on sunlight, carbon dioxide and soil water and minerals. Next layer up on the pyramid is the herbivore mob: leaf and stem eaters, sapsuckers, root nibblers, seed and fruit gobblers. Above these green feeders are a couple of layers of predators. And that about sums up the world, right?

Wrong. That's only part of the world, and a small, very specialised part of it, too.

To begin with, most animals can't eat green food. Her­bivores are dietary specialists among the insects, mol­lusks, birds and mammals. Your average green leaf or stem doesn't show much herbivore damage, and for good reason. It's mainly water boxed in by cellulose and other structural carbohydrates, which are impossible or extremely hard for animals to digest. Other nutrients are present, but at low con­centrations. You need to eat a great mass of indigestible green stuff to get a decent return of ele­ments like nitrogen, phosphorus, potassium and calcium. As for animals eating wood, which makes up most of the biomass in a forest – well, there are termites, and ...um ...termites...

The truth is that in the real world outside the biology classroom, only a tiny proportion of terres­trial primary production goes through the stomachs of the few evolutionary lineages brave enough to tackle what green plants produce. In any terrestrial habitat, the great bulk of primary production just does not get eaten. It sits, instead, at the bottom of a very different food pyramid. I call it the Dead Plants Society (DPS), as opposed to the Green Feeders Guild (GFG).

In the absence of fire, all that uneaten primary production is first attacked by fungi and bacteria. By 'attacked' I mean 'converted from low-nutrient indigestibles to concentrated yummies', i.e. fungal and bacterial bodies. Stacked on top of this microbial layer in the pyramid are microbivor­ous layers of nematodes, mites, springtails, earthworms, millipedes and other soil animals. On top of those are predators – but picture 'centipede', not 'eagle'.

The GFG and DPS animal communities differ in many ways. To begin with, in any given habitat the GFG has very high species diversity (think of plant-eating insects) but low higher-taxon diversity, while the DPS has great higher-taxon diversity (lots of strange sorts of animals), but low species diversity. Next, GFG herbivores tend to specialise on particular plants, while DPS microbivores will eat anything that's rotting nicely. There are also a lot of winged GFG members ('gotta find that particular plant I like…'), whereas almost no DPS members have wings, at least in their younger, feeding stages. There's an architectural difference, too. The GFG extends well up in the air, to ca. 100 m in some tall forests, while the DPS is largely confined to the ground.

Then there's the matter of heritage. The earliest DPS fossils are of mites, springtails and milli­pedes, and they're more than 400 million years old, from a time when terrestrial vegetation was mainly mossy and ground-hugging. The first solid evidence for green feeding (early insects with spores in their guts) appears much later in the fossil record, from coal swamp times. The DPS is vastly older than the GFG, and when you handle richly organic soil you're holding animal commu­nities which are spectacularly ancient and robust. You can almost imagine a springtail thinking: 'Seen the dinosaurs come and go, mammals are nearly done. Wonder what great lumbering dopes we'll see in the next 100 million years? Yum, love these hyphae with yeast sprinkles!'

Dr. Robert Mesibov is a taxonomist from down under who studies seriously fungophilic animals: millipedes. Check out his other many-legged doings via his website. A previous article on the Dead Plants Society is available here.