« The Leopard and the Mouse: A Microbiologist's Take | Main | The Attendee's Guide to Scientific Meetings » 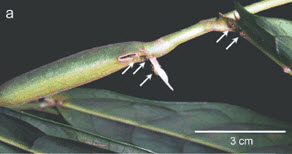 A section of a stem of L. a. africana. The swollen section to the left is a domatium showing the entry slit created by the re­sident ants, Petalomyrmex phylax. Ar­rows point to worker ants. Source

Early in childhood, we learned that the plants and ani­mals around us are discrete entities with definite bound­aries. A dog might have fleas, but fleas and dogs are se­parate and distinct individuals. With our increased fa­mil­iarity with symbioses – especially those of the obligate sort – have come many instances where "separate" in­dividuals can seemingly survive only as part of a func­tioning association. Here is yet another example.

For more than twenty-five years, Doyle Mckey, now a professor in ecology, University of Montpellier II, France, has been studying one species of tree, Leonardoxa af­ricana africana (Fabaceae or Leguminosae) – known locally as the bush-boer bean. Likely you've never seen one of them as they are found only in a narrow strip of humid coastal rain forest in southern Cameroon. This particular tree is a myrmecophyte, that is, an ant-plant. (For those who relish words as we do, myrmecophyte is from the ancient Greek myrmeco, "ant" and phyton, "plant." Myrmecophyte is not to be confused with myrmecophile, a general term for any organism that lives in association with ants, or with the Myrmecophila, a genus of myrmecophytic orchids.) 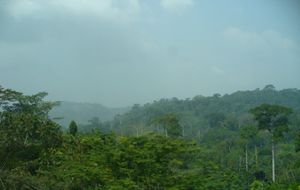 The tropical rainforest in southern Ca­meroon, the home of this particular con­dominium plant. Source

Ant-plants are plants that have a particular way of ac­com­modating their symbiotic ants. So far, they have been found only in tropical forests, and there they run bed-and-breakfasts for specific ants. Breakfast is typically nectar dispensed apart from the flowers in extrafloral nectaries, a strategy employed by at least 66 plant fa­mi­lies, not just by ant-plants. Dispensing nectar is costly, but it has significant benefits. Ants forage preferentially on plants with extrafloral nectaries, repaying their host plant with protection against herbivorous insects. In one instance, a study of the rainforest pioneer tree, Macaran­ga tanarius, done in Malaysia showed that increased her­bivory induces increased nectar production that, in turn, attracts more ant defenders, who then proceed to significantly reduce the herbivory. 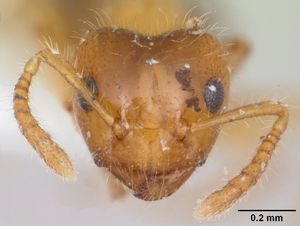 Ant-plants offer more than nectaries; they modify parts of themselves to form specialized hollow structures cal­led domatia (from the Latin domus, meaning "home") for housing colonies of mutualistic ants. In the case of L. a. africana, the domatia are swollen hollow internodes along the stems, each offering enough space to accom­modate approximately 25 workers of the ant, Petalo­myrmex phylax. Counting up the number of domatia in adult trees 14 meters tall, Mckey estimated that each tree harbors hundreds of thousands of workers. The wall of each domatium is thinner and unlignified in a small area, and this is where the plant-ants construct their entryway. In an early study, Mckey observed that the plant-ants do attack small insects on their host plant. He also found that they patrol primarily young leaves, even though the nectaries are located on the old leaves. This is fine for the plant; mature leaves are self-protected against herbivory by chemical and physical defenses such as tannins and lignins.

All of this suggests a longstanding and finely tuned mutualism between this ant-plant and its plant-ants. The relationship appears to be obligatory. P. phylax has never been found apart from L. a. africana; every L. a. africana houses P. phylax. There is occasional cheating when a domatium is occupied by another ant (Cataulacus mckeyi) that consumes the nectar but provides no pro­tection.

Enter the fungi. Fungi have been commonly observed in the domatia of tropical ant-plants, but their role there was completely unknown until recently. McKey and colleagues have now moni­tored 139 L. a. africana trees sampled from across its entire geographic range. They found a fungus patch in 95% of the domatia occupied by P. phylax, but none in domatia occupied by the cheater, C. mckeyi. Fungi are never seen in unopened domatia, and only a small patch is found in recently opened ones, suggesting that the fungus is inoculated from without – presumably by the ants. Sometimes when the experimenters disturbed a domatium by drilling tiny observation holes, the ants vacated, seemingly taking their fungi with them. Since no reproductive structures (for example, asexual spores) have yet been observed on these fungi, it is possible that they depend on the ants for dissemination.

The interface between the ant-plant L. a. africana and the fungal patch. S = the in­ner wall of the domatium. F = fungal hy­phae. Source

Strikingly, there is always just one fungal patch per do­matium, and it is always a neatly-trimmed, disc-shaped mat with no hyphae protruding or extending into the plant tissue. This is not what one expects of a fungal my­celium left to do its own thing. Using a video camera fit­ted with an endoscope, McKey and colleagues observed the ants interacting with the fungus in various ways, for example, by defecating or depositing detritus on it, by chopping off bits and carrying them away.

The relationship between this ant-plant and the fungus is species-specific. Using PCR on DNA isolated from indivi­dual fungal patches, they found that these fungi form a monophyletic group within the Chaetothyriales, an order of ascomycetes. They have no close relatives in GenBank and are distinct from the fungi associated with other ant-plants. But is the fungus mutualistic? Perhaps. One possi­bility is that it serves as nutrient recycler, transforming all the refuse produced by the ants into nutrient forms usable by either the plant or the ants. Indeed, almost every fungal patch is associated with a refuse pile containing fragments of ant cuticle and other unidentifiable debris. By contrast, domatia occupied by the cheater ant C. mckeyi, which do not have the fungus also do not have a refuse pile. Alternatively, the fungus could be a food source for the ants, as is the case for the leafcutter ants and for Euprenolepis procera, an ant that appears to rely entirely on naturally growing mushrooms. (We featured E. procera here.)

There is even more life to be found in these domatia. Not surprisingly, TEMs of the fungal patches revealed a world of microorganisms, including numerous bacteria. Visible to the eye are nema­todes that graze the bacteria. Added to that, many plant-ants are known to rear hemipterans within the domatia for food.

We look forward to the day when our mindset has shifted, when what is newsworthy is not the report of another complex symbiotic community, but the rare discovery of an organism that seemingly lives alone.