We recently reprinted an article by Patrick Keeling entitled Five Questions About Microsporidia. His fine dis­cussion prompted us to attempt a similar examination of another highly important – but oft-neglected – group of microbes, the oomycetes or water molds. We will post three articles, the first one (herewith) describ­ing oomycete biology, the other two focus on a particular oomycete: the late potato blight pathogen. There we will recount a bit of Irish history and then discuss aspects of the pathogen's genome.

What Makes Oomycetes Important to People? 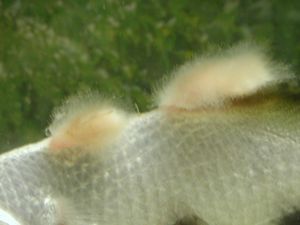 As you know, the potato blight caused widespread fa­mi­ne in potato-dependent, mid-19th century Ireland. You may also be aware of a current malady, sudden oak death, that affects large numbers of trees in the Pacific coastal states of the USA. And if you are involved in ag­riculture in any way, you have likely heard of the downy mildews of lettuce, onions, spinach, strawberries, and other crops. Likewise, those concerned with aquaculture are alert to a variety of "fungal" diseases, including one called saprolegniasis that causes about a 10% mortality in pond-grown salmon.

What do these diseases have in common? They are all caused by oomycetes, a large group of or­ganisms that resemble fungi morphologically but are distant from them phylogenetically. Patho­genic oomycetes cause massive destruction and huge losses in agriculture and aquaculture. They infect many animals, among them fish, crayfish, and mammals – including humans. Oomycetes, along with chytrid fungi, are thought to be involved in the current global decline of the frog popu­lations. Since some oomycetes prey on pathogenic fungi, they are considered candidates for bio­logical control of fungal infections of plants.

Because of their impact, much effort has been devoted to elucidating the genetics and biochemis­try of particular oomycetes. Likely the best studied one is the agent of the potato blight, Phytoph­thora infestans. The literature about this organism is indeed impressive, commensurate with this organism's accomplishments as a pathogen.

Are Oomycetes Fungi or What?

Oomycetes are a diverse group of eukaryotic organisms. The 500 or so species include both pa­rasites and saprobes. They are found worldwide in freshwater and marine habitats. Some prefer well-aerated streams, others stagnant waters. 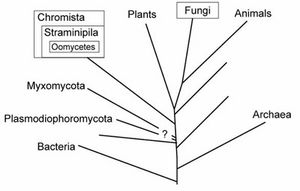 The oomycetes in the Tree of Life. Source

They have been traditionally lumped with the fungi, part­ly because, being filamentous, they look like filamentous fungi. When grown on agar, it can be hard to tell the two groups apart – they both make hyphae and mycelia. Oo­my­cetes and fungi share a nutritional mode: they feed by secreting enzymes that degrade polymers such as cellu­lose, lipids, and proteins, then import the resulting build­ing blocks into their own growing cells. Like fungi, oomy­cetes reproduce by both sexual and asexual spores. But are they kin? Molecular phylogeny places them in a to­tally different kingdom, the stramenopiles (aka hetero­konts).

So what are stramenopiles? They are a large group of protists (over 100,000 species) that include many previously classified as fungi, protozoa, or algae (such as diatoms and kelp). The oomycetes comprise the largest group of non-photosynthesizing stramenopiles. Stramenopiles share some distinguishing structural features, such as tubular cristae in their mitochondria and motile asexual spores. These zoospores have two flagella: the anterior one is called a "tinsel" flagellum for its nu­merous hair-like projections along the shaft; the posterior one is termed a "whiplash" flagellum. The anterior flagellum is probably responsible for pulling the zoospore through the water, while the posterior one acts as a rudder for steering the cell. Taxonomists get excited about these defin­ing structural characteristics. Zoospores are wall-less, thus are sensitive to certain environmental challenges. 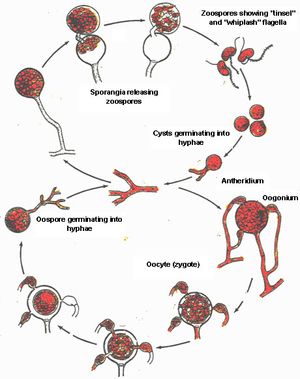 There are other ways that you can tell an oomycete from a fungus. Oomycetes are diploid for most of their life cycle, fungi mainly haploid. The two groups synthesize lysine by different pathways (fungi via α-aminoadipic acid, oomycetes via α,ε-diaminopimelic acid). The cell walls of fungi contain chitin in high amounts, those of oomycetes are made up of other glucans, including cellulose.

Although the oomycetes and the fungi are unrelated, their many phenotypic similarities bring to mind thoughts of convergent evolution. Recently it was found that oomycetes have acquired some genes from fungi, but they have also imported genes from diatoms, brown algae, and even cyanobacteria. Such gene transfer events appear to have taken place often, suggesting that the oo­mycete genome has a chimeric ancestry.

Despite all their phylogenetic and physiological differences, the fact remains that oomycetes look a lot like filamentous fungi. This is one of those situations where molecular and biochemical facts don't match up with what your senses (common or otherwise) tell you. We repeat the words of Groucho Marx: Who are you going to believe, me or your own eyes?

What Does Oomycete Mean?

It means "egg fungus," a term coined because of the large round structures containing the female gametes, the oogonia. The other common name for some oomycetes, "water molds," refers to the fact that they were first found in freshwater habitats.

The case has been made that the familiar term "fungus" should not be limited to strictly systemati­cally correct usage. The distinguished mycologist Nik Money suggests that, despite the phyloge­ne­tic chasm between the fungi and the oomycetes, "egg fungus" is an acceptable colloquial usage that benefits from the all-embracing connotation of "fungus." Do you think this is going to fly? On the other hand, the term "mold" lacks a specific phylogenetic association, and thus one can use "water molds" in even the best taxonomic company.

What Is the Life Cycle of Oomycetes?

Oomycetes are diploid throughout their life cycle, except briefly when they are haploid gametes—just like us. In the asexual cycle, hyphae differentiate into structures called sporangia that contain the motile zoospores. This process has been studied in some detail; some sporulation-specific genes have been identified and their role in differentiation elucidated. The zoospores germinate to make more hyphae, which make more spores, and so on. When zoospores of some species germinate, they give rise to two kinds of hyphae, male and female. 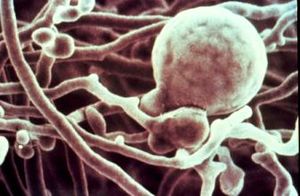 SEM of a zygote (oocyte) in the making. The round, spherical cell is the female oogonium, the swollen hypha, the male an­theridium. Source

The sexual cycle gets going when terminal cells in the hy­phae undergo meiosis and differentiate into haploid ga­metes, some male and others female. We usually think of gametes as being free cells, but these are not. Rather they remain attached to their parental hyphae. The cell carrying the female gamete (oogonium) is spherical, whereas the one with the male gamete (antheridium) looks pretty much like a regular but swollen hyphal cell. The two mate via a fertilization tube extending from the male to the female gamete, which gives rise to the zy­gote, the oocyte. Eventually the zygote germinates to yield more hyphae. Mating types and compatibility are also part of the sexual story. Unlike the zoospores, oospores (derived from the oocytes) are highly resistant to desiccation and other environmental influences – thus important in the transmission of these organisms between hosts. Sex among the oomycetes plays an extra, unusual role: it is part of their strategy for survival.

How Do Oomycetes Infect Their Hosts?

Many, perhaps most, of pathogenic oomycetes have a broad host range, meaning that they infect a variety of species. Thus, Saprolegnia parasitica causes lethal infections of bass, trout, catfish, bream, flounder, and other freshwater fish. The agent of Sudden Oak death, Phytophthora ramo­rum, causes serious disease not only in oaks but also in redwoods, Douglas firs, and other trees. And Pythium insidiosum causes chronic skin lesions in a large variety of mammals, including do­mestic animals and humans. The best studied of the pathogenic oomycetes is Phyto­phthora infestans, the agent of potato blight and similar diseases in related plants. Infection of hosts is often the work of the motile zoospores that are produced in large numbers from the sporangia. They find their hosts by chemotactically sensing chemicals secreted by the plants. Once in contact with the host, zoospores turn into resis­tant cysts that turn into hyphae. Oomycete hyphae and their specialized forms, the haustoria, do not penetrate the plant cells but obtain nutrients from chemicals se­creted by the plant. The oomycete stimulates this pro­cess by itself secreting certain proteins. The necrosis in the plant leaves is due to a hypersensitivity reaction that recognizes the pathogen's attack.

The hyphae spread in all directions, eventually causing a visible necrotic lesion. Other pathogenic oomycetes cause disease by using variations on this theme. However they do it, they are, in the words of the British oomycete expert Gordon Beakes, “natural born killers." 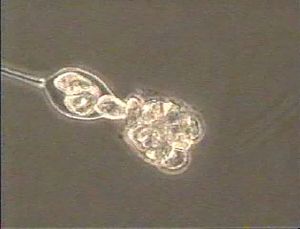 Click here (sorry, link is dead as of 2021) for a movie of Phytophthora sojae (a soy­bean pathogen) sporangium germination and zoospore release. Credit: Edward Braun

There is even more drama to be found among the oomy­cetes. Some are able to forcibly discharge spores into a potential host. We previously featured one, Haptoglossa, with its highly differentiated gun cells capable of injecting a viable spore into passing nematodes or other hosts. (There we called it a fungus, displaying our previous igno­rance and the taxonomic confusion widespread in the field.) Note that similar mechanisms of spore discharge are used by the microsporidia .

We can understand why enigmatic and confusing groups, such as the microsporidia and the oo­mycetes, have often been ignored in favor of others. But this has been our loss, as they are fascinating.

I thank Nik Money for helpful suggestions. I also thank Matthew Martin for correcting some misinformation that crept into a previous version of this post.

Anyone know the benefits of Oomycotas in the environment?

Elio replies:
I have no idea but think that this is a great question. Anyone?