Genomic Secrets of P. infestans, the Master of Potato Blight

This is the third and final post for our week of the oomycetes. In our first post, Elio provided the foundation by answering five key questions about this often neglected and misunderstood group. This was followed by a reminder from Mercè Piqueras of the role one member, the potato blight pathogen, has played in our histo­ry. Here in this final offering, Merry explores what we now – more than 150 years after The Great Famine – know about this pathogen's tactics from its genome sequence. 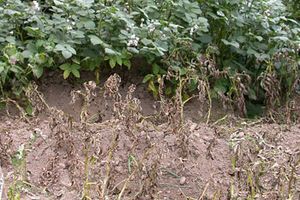 Working in Hungary in the 1950s, Dr. Istavaán Sárvári developed some blight resistant potato varieties that have been recently introduced into Britain as Sárpo (i.e., Sárvári + potato) cultivars. For the mo­ment, they are holding their own, but "durable resistance" is unlikely. (Fore­ground) a susceptible variety killed by blight. (Background) A resistant Sárpo va­riety. Source

More than 150 years after the historic Irish potato fa­mine, the deadly pathogen responsible for potato blight, Phytophthora infestans, is now destroying more than $3 billion worth of potatoes each year. What is the secret of it's pathogenic success? Hoping to find some answers in its genome, a team of 96 researchers have sequenced virtually its entire 240 Mb genome. This is by far the lar­gest and most complex genome sequenced among the chromalveolates, a diverse eukaryote supergroup that includes not only the stramenopiles (the oomycetes, diatoms, and some algae) but also the dinoflagellates and the apicomplexans.

Why so much DNA? That's more than double that of Caenorhabditis elegans.

Tellingly, though, the number of genes in this oomycete is not twice as large. It is only about 18,000 versus 19,000 for the worm. Closer to home, we can compare P. infestans against two other species, proficient pathogens both, that represent the other two major Phytophthora clades. They both get by with far less DNA: the soybean root rot pathogen, P. sojae, with 95 Mb, and the sudden oak death pathogen, P. ramorum, with a mere 65 Mb. The gene count is similar in all three species. What P. infestans has is more repetitive DNA in the form of more mobile elements.

(Click to enlarge) Comparison of the ge­nome of P. infestans with that of the soybean root rot pathogen, P. sojae, and the sudden oak death pathogen, P. ra­morum. The genomes are drawn to show their relative number of base pairs, with P. infestans being much larger than the other two. The pink and blue lines con­nect orthologs that are present in all three genomes. Note that the gene order for these shared genes is highly con­served. The black boxes shown for each genome indicate blocks of repetitive DNA in between the shared genes. The ex­pansion of this repetitive DNA is parti­cularly striking in P. infestans. Source

All told, 74% of its genome is repetitive DNA. The many active mobile elements therein are thought to be driving both the overall ex­pansion of its genome and the ex­pan­sion of particular gene families. About a third of the ge­nome is the result of recent proliferation of Gypsy ele­ments, a group of LTR retrotransposons. Also of special interest are the 273 Helitron DNA transposons. (Helitrons are transposons found in eukaryotes that replicate by a rolling circle mechanism.) This is ten times as many as in the other two Phytophthora species and many more than have been found in any other eukaryote genome to date. So what? They have been implicated in rapid evolution in the maize genome, in particular in the multiplication of related gene fragments – thus likely to be of use to a quick-footed pathogen.

Overall, the P. infestans genome shows an unusual pattern of gene distribution. Most of the genes are found in blocks with little repetitive DNA, while most of the mo­bile elements are clustered in blocks that contain relatively few genes. However, one quarter of the genes are found in the mo­bile element-rich blocks. These are of particular interest because they include large families of effector proteins implicated in pathogenesis. One group of them is translocated directly into the plant cells by specialized structures called haustoria. The archetypal oomycete cytoplasmic ef­fectors are the RXLR proteins, so named because the four amino acids at the amino-terminal end are Arg-X-Leu-Arg (where X represents any amino acid). This short motif tags the protein for de­livery to the inside of the plant cell. The other end of these proteins is a variable effec­tor domain. Not only are these RXLR proteins more numerous in P. infestans than in P. sojae and P. ramorum, but they are also diversifying more rapidly and turning over faster. Half of them are found in P. infestans only.

Another group of effectors, the Crinkler or CRN cytoplasmic effectors, has likewise expanded in P. infestans into an enormous family of unexpected complexity and diversity. Helitrons have been implicated in their diversification. Referring to both groups, the authors note: This expansion provides a species-specific repertoire of effector genes, the dynamic nature of which probably provides an advantage in the arms race with host species.

Given the diversity of effector proteins already present in P. infestans, plus their rapid ongoing evolution, the potatoes with their repertoire of resistance factors have little chance. Most plant breeders and researchers have given up the search for a host resistance factor – or even a com­bination of a half dozen or more – that can provide "durable" resistance against infection. Like­wise, the effectiveness of even our most effective pesticide is on the wane. Perhaps it is time to fight fire with fire. P. infestans does have its parasites, its viruses. Perhaps if we partner with them, we will have a sporting chance in the arms race against the blight. Perhaps.