It Was The Worst of Times, It Was the Best of Times

At the end of the Permian period, about 250 million years ago and not long before the dinosaurs appeared, life on Earth experienced its greatest catastrophe: a mass ex­tinc­tion that did away with the vast majority of life forms on land and sea. The question arises, who ate the carcas­ses of the deceased? Surely bacteria and protozoa digest­ed the animal corpses, most likely reaching unusually high population sizes as the result. But who took care of the masses of dead plant material? Fungi are quite good at digesting plants, especially woody plants. So, did the fungi also become prevalent after the catastrophe?

There is evidence for this belief. As the Permian period came to an end, there was a massive spike in the popu­lation of Reduviasporonites, a "morphogenus" of mi­croscopic organisms fossilized as single cells or multicel­lular chains. (The -ites ending is sometimes used to denote organisms known only as fossils. Redu­vius, if you care for such things, comes from the Latin reduvia meaning hangnail or remnant. Just why it was called that, I don't know.) Apparently they thrived at that time, as judged by the abun­dance and the widespread geographic distribution of their fossils. More recently, they have had a checkered taxonomic career. Originally thought of as fungi, they were later relegated to the mi­croscopic algae. It makes a difference. If wood-decaying fungi, they suggest a massive loss of standing biomass on land. If algae, picture widespread swamping. Now, they are back among the fungi. Maybe. 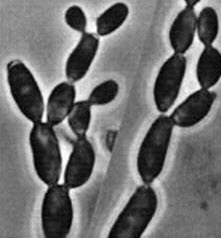 The evidence? A new paper in Geology is one of the latest to deal with this question. They used "high-sensitivity equipment, partly designed to detect interstellar grains in meteorites." Their pyrolysis GC-MS of fossil Reduviaspo­ro­nites showed that they do not contain the algal bio­mark­ers, such as breakdown products of chlorophyll – a strike against the algal theory. In addition, these re­sear­ch­ers found the ratio of N15 to N14 in the material to be characteristic of that seen in fungi, and distinct from that for algae. Another point for the fungal side.

What do these "disaster species" look like? They are usu­ally seen as chains of ovoid cells, each around 25 µm in diameter. Many fungi on today's Earth look quite similar. If Reduviasporonites were indeed fungi, much of the pla­net must have been covered by a mushy mess of myce­lia. For the time-traveler, it would have been the worst of times.

Surely after a mass extinction the large amount of dead animal and plant material would be around for only the blink of an eye in geologial terms, and so would be unlikely to be a significant new food source or niche?

Elio replies:
You are right about the short duration of the corpses and detritus, but they could have supported a huge population of the fungi at the time. If these particular fungi were especially adept at becoming fossilized, one would expect them to be found in large amounts and constitute a record of what happened in the "blink of the eye".