« Genomic Secrets of P. infestans, the Master of Potato Blight | Main | The Leopard and the Mouse: A Microbiologist's Take »

Marine Archaea and the Nitrogen Cycle

What is more stirring than to contemplate the cycles of matter in nature? We sense that we wit­ness vital transactions of this planet’s metabolism, a fulfilling thought. Such matters speak parti­cularly loudly to us microbiologists: not only do global fluxes concern the elements of life but are to a great extent driven by microbial activities. In this vein, here is some important news.

Analyses of the nitrogen budget in the oceans suggest that a whole lot more nitrogen is being fixed than was recognized. Who does this extra nitrogen fixation? A recent paper from the labora­tory of Victoria Orphan at Cal Tech provides clues that may help balance the nitrogen budget. These researchers studied the syntrophic aggregate of archaea belonging to the ANME-2 group and bacteria belonging to the Desulfosarcina/Desulfococcus. These consortia are a big deal: they consume about 80% of the methane released from seeps in marine sediments. Intriguing here is that their metagenomic analysis revealed that they contain genes for nitrogenase, the key enzyme in nitrogen fixation. So, do these partnerships fix nitrogen? And, if so, does this contribute sub­stantially to that arm of the nitrogen cycle? The answer seems to be yes to the first and, "well, to some extent,” to the second. 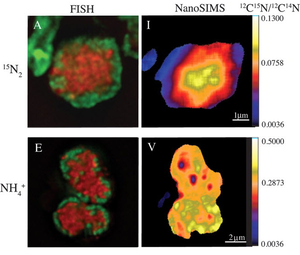 (Click to enlarge) Magnitude and distri­bu­tion of 15N incorporation in a ANME-2/ DSS consortium from sediments incu­bated with CH4 and either 15N2 (A and E) or 15NH4+ (I and V) as the N source. FISH used probes targeting ANME-2 (red) and Desulfobacteraceae  (green). NanoSIMS images show the 12C 15N / 12C 14N ratios of the same microbial consortia to de­monstrate the location of 15N incor­po­ration. (The scale range varies between images, with the min. consistently set to natural abundance 15N/14N.) Source

How these workers went about this research is instruc­tive. They incubated marine sediment samples with me­thane and one of several 15N-labeled N sources and fol­lowed the enrichment of the consortia for 15N over a period of six months. They determined 15N/14N by se­condary ion mass spectrometry (nanoSIMS) imaging of single cells labeled for bacterial and archeal fluorescent probes. Thus, they could tell the location of the isotopic label in each of the microbial partners. The consortia often consist of spherical cell aggregates having a bac­terial shell and an archaeal core. Their data suggest that nitrogen fixation takes place in the archaeal interior and that the archaea use that nitrogen to make reduced nitrogen compounds that they export to the bacterial layer.

Cells incubated without sufficient methane or under conditions that inhibit sulfate reduction did not incor­porate 15N dinitrogen. PCR and sequence analyses of nitrogen fixation (nif) genes recovered from the DNA present in the 15N-labeled incubations displayed si­milarity to sequences from methanogenic archaea. The nif operon gene order also suggested an archaeal source.

An additional curious aspect of nitrogen fixation in this aggregate is that ANME-2 archaea gener­ate less energy per mole of substrate oxidized than any other microbe known to undertake the energetically expensive process of nitrogen fixation. The consortium grew twenty times faster when provided with ammonium rather than nitrogen as a nitrogen source, but the cells main­tained similar respiratory rates under both conditions, apparently adjusting to a lower growth rate when stressed with the need to use more ATP to fix their own nitrogen.

There is much more to be found out. The authors state: "...our inventory of marine diazotrophs is incomplete and... we are only beginning to understand the extent and importance of benthic ma­rine N2 fixation." That may be so, but the trip to this destination will be nothing short of fascinat­ing.

Doug Bartlett is Professor of Microbiology at the Scripps Institute of Oceano­graphy, University of California at San Diego.